Zen & the Art of Rejuvenation

It starts to rain lightly as the Rev. Matsuyama Daiko, the young abbot of Taizo-in Temple, emerges from under a bower of wisteria. A graduate of Tokyo University, Matsuyama greets me in impeccable English and leads the way through the drizzle with confident strides. The third generation in his family to become head priest at Taizo-in, Matsuyama is progressive in his approach: As ambassador to the Japan National Tourism Agency he offers Zen Experience Tours to non-Japanese who wish to try zazen meditation, the tea ceremony and shōjin ryōri (Buddhist vegetarian cuisine). 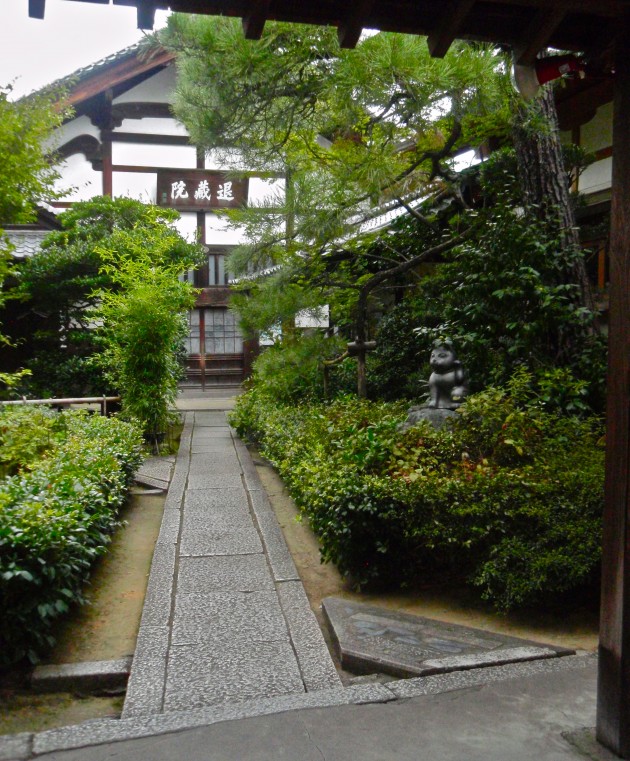 The charming garden where I have been sipping matcha tea is only about 50 years old. It is the newest addition to Taizo-in, which in turn is part of the massive Myoshinji headquarters comprised of 46 sub-temples (and thousands more worldwide). Myoshinji’s history stretches back as far as the Muromachi period (1392-1573). Along its peaceful, stone-paved lanes one sometimes comes across lively movie crews and costumed actors filming samurai period dramas. But the temples here are more than a cinematic backdrop. In one sense history is still being made at Myoshinji: Japanese art history.

Led by a priest who clearly recognizes the importance of sustaining and even reinvigorating Kyoto’s artistic heritage, Taizo-in launched its groundbreaking ‘Fusuma-e Project’ in the spring of 2011. The Zen temple is commissioning a young, unknown Kyoto-based artist to compose large sumi-e ink paintings on 64 new sliding doors, or fusuma. These pictures will be revealed to the public in the fall of 2013. They are expected to last for 300 to 400 years.

A panel of judges formed in collaboration with Kyoto University of Art and Design selected Kobe-born Murabayashi Yuki from a group of 30 promising young candidates. Six months on, I have come to Taizo-in on a damp late summer day keen to see the progress Murabayashi has made since her appointment.

In the spirit of the ancient system of temple patronage, Murabayashi is obliged to live in the temple premises for the three-year duration of the project, both to become absorbed in the way of Zen and to understand the dynamics of the temple itself. Once the project work gets underway, the painter is equipped with the finest materials to complete the work, each sourced from the regions for which their craftsmen are famous: ink from Nara, brushes from Kyoto, and the paper from Fukui. Even the daring Taizo-in takes no chances: “We are ordering 80 sheets of paper to allow for error,” says the abbot. And the new fusuma themselves are being constructed by special Kyoto carpenters. 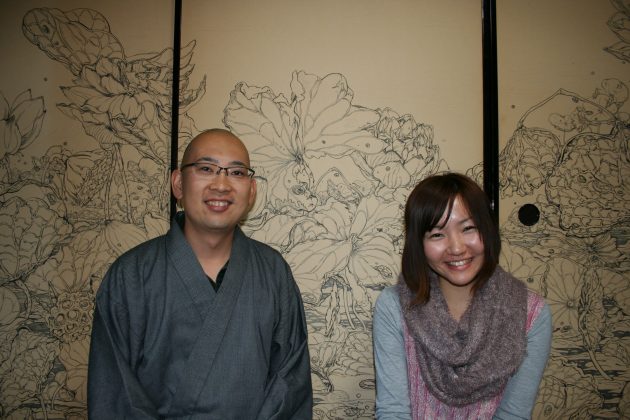 Entering the Main Hall, the first thing I notice is the very lack of fusuma-e. They are being kept in storage, the abbot explains, to protect them during the harsh conditions of summer and winter. I point to two faded ink paintings of a temple landscape flanking either side of the altar. They are by Kano Ryokei (the Kano School having been one of the most revered in Kyoto from the Momoyama to Meiji periods). “Won’t these two,” I ask the abbot, “be taken down for preservation at all?”

“Oh no, of course not,” begins his slightly enigmatic reply. “The Buddha is right there!”

The Hall will be divided into five sections to reflect the five ‘Gorin,’ the elements which Buddhism teaches constitute all manner of things: chi (地): earth; ka (火): fire; fu (風) wind; sui (水): water; and, less easily translatable, kū (空): void. “Hence,” Rev. Matsuyama says, “as you sit before the altar, you will be surrounded by the whole universe.” Not only does Murabayashi have these concepts to consider but also the temple surroundings, including the elegant dry landscape garden onto which the Hall looks out. It is no small feat for a 24-year-old.

“In fact, until now she has had no formal training in ink painting, ” Rev. Matsuyama informs me. 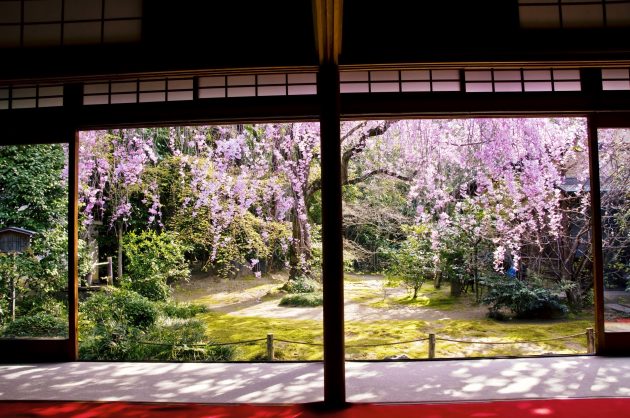 As we make our way to the temple’s living quarters we are greeted by the yapping of the resident dog, Hina-chan. The stairs — lined with the figures of Snow White and the Seven Dwarfs, all of them skipping — have a view out onto a grand old bronze bell. It is likely the same bell that Matsuyama the young boy was scolded for ringing at inappropriate times (see KJ 70; ‘Kyoto Lives’ pp. 70-71).

The young abbot introduces me to Murabayashi Yuki, who is conventionally dressed and so non-eccentric in manner that I am astonished by the creative genius laid out upon the four sliding panels before which she stands. How long, I ask her, did these take you?

“Oh, only a few days,” she says, smiling. “It takes much longer to come up with the ideas than to translate them to paper.”

It was the height of spring when Murabayashi completed this set of work, which she took to Tokyo for an exhibition in July. The wisteria, depicted in hundreds of sprawling yet graceful lines, looks as though it might spill from the doors’ façade. But it is the camellias in luminescent white that take centre stage, easily eclipsing in size a robust pigeon. On the reverse side, she has now begun work on the jungle of a lotus pond.

One reason for Murabayashi being selected, Rev. Matsuyama explains, is her extraordinary speed. Since no work will begin on the actual fusuma-e until the summer of 2013 (and 64 paintings must be ready prior to fall) dispatch is certainly a useful quality.

So, I ask the abbot, this piece will not be featured in the Main Hall?

“No, this is a separate work. Right now, Yuki is simply observing the changing seasons here.”

Though the abbot had forewarned me of Yuki’s “messy” room, finding it tidy now it appears she has adapted to the Zen lifestyle — either that or she has hidden all her possessions from view — for the small tatami room has just a single shelf holding a modest number of books. Two single-paneled doors have been used for earlier ‘jottings.’

Patting the abbot’s shoulder, she smiles.

“There are also two disciple priests living at the temple,” adds Rev. Matsuyama.

I begin to envision a scenario adapted as a hit British TV comedy — three co-habiting male priests and a young female painter. But I digress. Murabayashi has handed me a chunky portfolio of her artwork as a student, and I am curious to see it…

Is this the same artist?

The cartoonish figures, mostly female, border on the grotesque and are surrounded by a menagerie of exotic or mythical creatures and plants, all in shocking colour. A skeletal woman plucks a bumblebee from her eye. Another has crickets crawling among the masses of red berries sprouting from her face.

“I’m not sure whether this would go down well in the temple,” I say to Yuki in jest. Both painter and priest shake their heads in unison, laughing: “Oh no, no!”

When asked who inspires her, Murabayashi is quick to respond: her own sensei at Kyoto University of Art and Design, the renowned pop artist Tanaami Keiichi. Tanaami, who enjoyed the company of Andy Warhol among other prominent psychedelic artists of the ‘60s, certainly does not shy away from the wacky, often drawing upon his own personal experience of the Tokyo bombings and his dreams as inspiration for his works. Tanaami has been cultivating young talent at the university for some 20 years.

As Murabayashi’s style has developed it has toned down, and she tends to paint mostly in monochrome now, Rev. Matsuyama explains. But since the loose sense of proportion, boldness of lines and mind-boggling detail are still very much present, Yuki’s paintings retain that surreal, dream-like quality. On the other hand, no matter how supernatural her works may be, her admiration of the natural world shines through. Perhaps this is what the panel saw when envisioning their new Temple Hall. 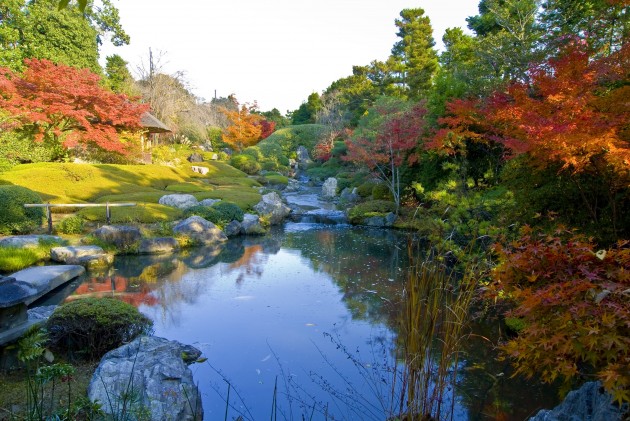 The Fusuma-e Project demonstrates that modernization need not pose a threat to conservation of cultural heritage; that the younger generation can directly take part in it. The unveiling of 64 new paintings at Taizo-in in the autumn of 2013 promises to be a spectacle that should not be missed, and likely one of a series of highlights in Murabayashi Yuki’s promising career.