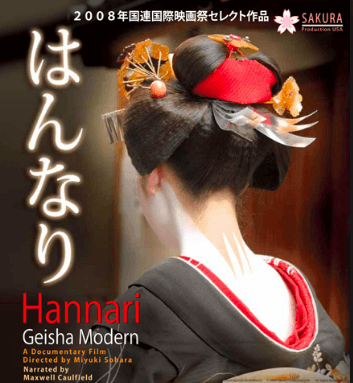 Hannari — Geisha Modern is a documentary film about the lives and arts of geisha in contemporary Kyoto filmed from the perspective of a Japanese woman. Director Sohara Miyuki is a Japanese actress who has been living in Los Angeles for more than a decade. Having played geisha roles in Hollywood productions and, as she states in the Hannari programme, having faced “the indifference towards the geisha culture” in the film industry and media, Sohara decided to make her own film about “this mysterious and fascinating world.” Hot on the heels of Rob Marshall’s film Memoirs of a Geisha (2005), Hannari is assumedly Sohara’s response to Hollywood’s “indifference” towards “real geisha.”

Sohara’s much-publicised ‘access’ to all of Kyoto’s geisha districts is diminished by the film’s huge emphasis on dance: for the most part incredibly slow pieces filmed in long shots. While dancing is undoubtedly an important part of geisha life, it’s not the source of Western stereotypes and misunderstandings of what a geisha actually is. Since Hannari is aimed at a Western audience (it is narrated in English and subtitled in both languages) the focus of the film seems to be proving the worth of geisha arts when it could and arguably should be exploring the lives of these women. Hannari offers scant explanation of many of the other key aspects of the culture of geiko, as geisha are called in Kyoto, and therefore no exploration of the misapprehensions of their role. Instead, it emphasizes something called ‘the tradition.’ Modern Kyoto geiko surely lead very different lives from those of their predecessors in the prewar and postwar eras. So what kind of tradition is this, and for who? Mainly this is dealt with through images of local artisans toiling away to create an array of lavish and expensive geiko accoutrements, and via interviews with the dance teachers who choreograph the seasonal stage productions of each geisha district. It’s a surprisingly standard take on Kyoto’s traditional arts scene, with the usual concerns voiced about the difficulties of preserving knowledge of special Kyoto techniques — whether kimono-dyeing or dance styles.

The other side of this ‘tradition,’ the customer, appears only briefly, and Sohara never interviews any of the fabled ‘danna-san’ (sponsors). After watching an excruciatingly long scene from a ‘zashiki’ (tea house party) where the mostly elderly male guests reminisce about the heyday of the Kyoto film industry, one is unintentionally left with the impression that a geiko’s work can at times be a bit of a bore. At least on screen, this facet of the “mysterious and fascinating world” is particularly underwhelming.

As for the geiko, maiko (apprentice geiko) and tayu (courtesans) who appear, they come across as a dedicated, hard-working group of women who choose their words carefully in front of the camera. Here, Sohara’s ‘access’ is a disappointment; there is little here that hasn’t already been said on the Discovery Channel. The women she interviews wax lyrical about the old days, and even the nowadays, with a quick reference to various hardships endured. The only onscreen hint of hardships is a few seconds of a maiko in tears at a dance rehearsal. As one of the customers in the film says, geisha can’t be seen saying or doing gloomy and unseemly things. Ostensibly, telling the world that their job can be dull, or their dance teacher unreasonably strict, is not the done thing.

So, thank goodness for the appearance of Gion geiko Makoto (see interview p. 58, KJ 70), who pursues a concurrent career as a professional singer and finally gives the film the ‘modern geisha’ of its title’s promise. Makoto literally jazzes things up on screen, and Sohara films her on a trip to New York, where she sings in a nightclub. Out of Kyoto, wearing jeans and a t-shirt, Makoto is just as self-assured and natural as she is in formal kimono, makeup and wig. Hers is the most interesting profile in the film and could have been its main focus, bursting through the stereotypes and providing an original angle.

Sohara’s take on the geiko of Kyoto seems to promise so much, yet Hannari is ultimately a frustrating film. The title is never explained — does it mean “geisha modern,” or is that another concession to the Western audience? The film is far too disjointed to be any kind of anthropological exploration, and the camera work and background music (lots of Western stylizations of Japanese melodies) are just not exquisite or well-structured enough to give it a more artistic flavour.