Kumakura Seiko first worked in theatre to increase awareness of societal issues in an appealing way. As an activist and a mother she has since used her experience to launch trailblazing community projects in Kyoto.

In junior high school, Kumakura Seiko witnessed a musical theatre production that tackled aspects of the dark history between China and Japan. “I decided then and there that this was what I wanted to do—to contribute to helping solve societal problems with theatre, and to build relationships through song and dance,” she says. Before this Hokkaido-born mother of three started her family, she achieved this ambition, working as a producer for a public theatre in Kawasaki while living in Tokyo. She worked on festivals and special projects that brought foreign theatre companies, (including Palestinian and Indigenous Australian groups) to Japan to perform and teach high school students about history in entertaining and thought-provoking fashion.

Though this work fulfilled her childhood dream, Seiko found that she sacrificed much. “I worked so hard until the last train every day, I didn’t care about food, community or normal things in life,” she recalls. After having her first child, her perception of time changed, marking the first of three dramatic transitions in her life. A struggle through difficult morning sickness and appetite loss was followed by extended maternity leave to care for her premature infant, which motivated Seiko to become meticulous about what kind of nutrition she was putting into her body (and her child’s) for the first time in her life.

Seiko’s second profound realisation came through caring for her elderly in-laws, in particular her father-in-law who began degenerating with severe dementia just as her toddler was becoming more alert to the world. “This was the very first time I had been closely exposed to the beginning of a life, and also the ending of one… There are a lot of challenges in raising children and caring for the elderly; I’d read about this in newspapers but always thought that it didn’t apply to me. Then it became personal, and I panicked when I found myself having to do both at once. It’s now called ‘double care’ or ‘the sandwich generation.’” This social problem was much closer to home than those she had addressed previously through theatre; she managed in this way for three years before her father-in-law’s passing.

The third poignant event happened during the same period. “My first child turned one just three days after the 2011 Tohoku earthquake. When this accident happened I felt an overwhelming sense of danger; it was a crisis. I was so anxious thinking about the radiation, how to protect my child, and also myself because I hoped to have more children.” She packed up the three generations of her family, setting out from Kamakura to distance them from the Fukushima Daiichi nuclear disaster. 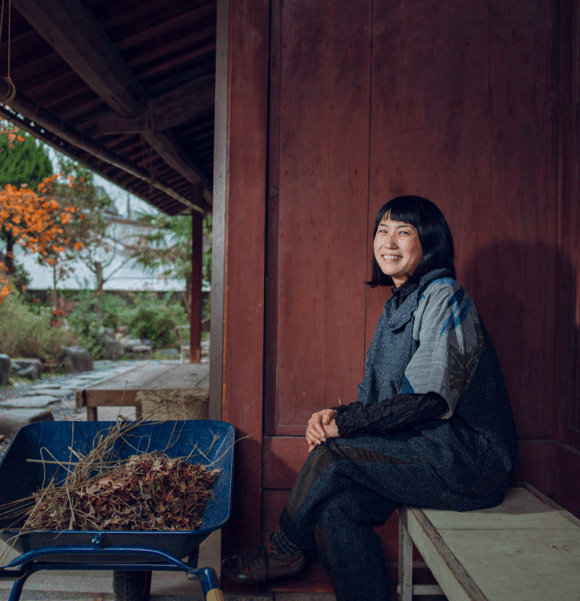 Kyoto became their new home. Seiko invested herself in Kamitakano Hatamachi (on the northern outskirts of Kyoto City) launching initiatives including a Forest Kindergarten and later the ‘Ookina Kazoku’ (Big Family) project, which she still runs, promoting inter-generational community-building and support for ‘double care’ givers. At the large group’s regular gatherings, elders and infants play and create art, such as ceramics, together. Seiko and others often take along produce grown organically in their gardens to share and enjoy. “After 3/11 I felt the community and sustainable life is very important. It is very difficult to change society, but it is much easier to start to change myself, my life and my family,” she reflects. “And that has a ripple effect, spreads to other people and can influence an entire community.”

Her latest work, Ourslab, explores similar notions. “My husband (an academic who taught cultural philosophy) and I have started a ‘life laboratory’ where we are researching the idea of a gift economy; how to live without money,’ she explains, citing the end of capitalism and need for a sustainable future for her children.

The members of her community are trying to find their own ways to balance life and work. “Together we grow food, and create things with our hands,” explains Seiko. “My table is beginning to become full of my work, and I don’t just look at it and see handmade, handmade, handmade, I see a revolution, the evolution of my life!”

Australian-born Elle Murrell interned with KJ in 2017-18. She is now Managing Editor at the Design Files.