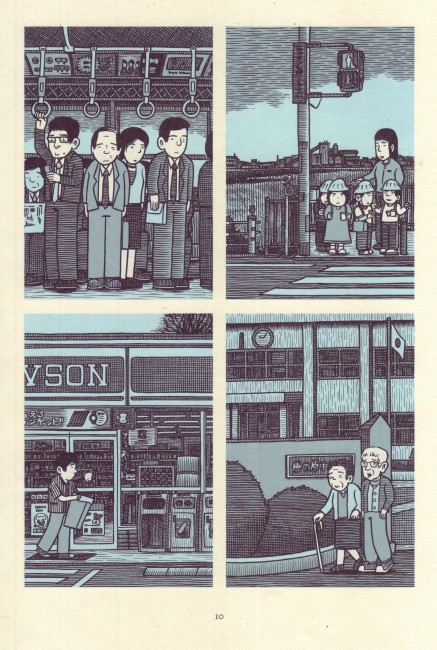 The only thing wrong with the first volume of Tonoharu, Lars Martinson’s saga of the English-teaching life in small town Japan, is that it ends too abruptly, just as the story is beginning to get good. The disappointment we feel, though, in turning the last, inconclusive, page of part one is assuaged in the second installment: Martinson sucks us right back into the narrative, and the plot does thicken. The art illustrating that plot remains exquisite, and would, even detached from the story, be worthy of attention. Especially notable are the views Martinson gives us of mundane Japanese life, scenes that any resident will recognize, but that may confuse those who spend too much time with tourist brochures or “Beautiful Japan” coffee table books.

A Japanese city street with a typical hodge-podge of buildings, cars, convenience stores, and neon signs may not impress one as beautiful when encountered in real life. Indeed those familiar with Japan will probably not notice it at all. Such lack of attention, though, deprives one of the aesthetic pleasure that can be derived from that which is not conventionally beautiful. To neglect such scenes when they appear in Tonoharu is to miss much of the charm of Martinson’s work. The symphony of verticals and horizontals with which Martinson renders, for example, an apparently throwaway view of a city street—cross-hatching that will be familiar to those who know Martinson’s style—is worthy of a look, and then another one. If we allow ourselves to become absorbed in his pictures of Japanese urban life we will remember that not just those illustrations, but also the Japanese urban life they depict, are also worthy of consideration. Martinson the draftsman makes us look afresh at the world.

The story that Martinson’s art illustrates in volume two has veered from the slice-of-life realism that characterized the first installment and taken at least a few steps toward soap opera. This is a good thing. An entirely naturalistic account of a rather unexciting—so far—American abroad in a rather unexciting—so far—provincial town is not without interest, but neither is it brimming with thrills. One is happy, therefore that a sleazy, manipulative seducer has entered the protagonist Daniel’s life, that Daniel now has a lover, and that his unrequited crush flits in and out of the picture. Also welcome are the wealthy Europeans and the art institute they—implausibly, but who cares?—run in Daniel’s little town. And one also welcomes the plot-twist with which this, the second volume of a projected four, ends. Soap operas, one remembers, specialize in ending each daily segment of their endless epics with just such cliff-hangers, and the soap-operatic ending of volume two is more satisfying than the abrupt slamming on of brakes with which part one screeched to a halt. The achievement of the first two volumes convinces us that volumes three and four—Draw faster, Mr. Martinson!—will be worth the wait.