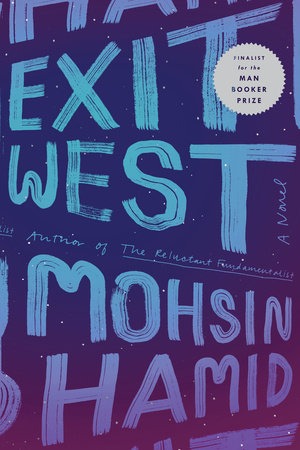 “In a city swollen by refugees but still mostly at peace, or at least not yet openly at war, a young man met a young woman in a classroom and did not speak to her.”

Thus starts Exit West by Mohsin Hamid, the Man Booker-shortlisted author of The Reluctant Fundamentalist. What follows is an intricately woven dream, coloured by love and loss, hope and despair.

The story evidently begins in a Middle Eastern city. Saeed meets Nadia in an evening class. Overcoming his apprehension, he asks her out for coffee. This kick starts what later proves to be a feisty relationship that transcends time and space.

While the shy and restrained Saeed is smitten early in the novel, the individualistic Nadia takes time to gauge her feelings and reciprocate. Meanwhile, the dormant political tensions in their city escalate. A military coup is attempted. Saeed’s mother is killed in crossfire. Interestingly, this death brings the couple closer and they start living under the same roof. When the revolutionary force takes over and the government succumbs, they are left with no choice but to flee their homeland for the Greek island Mykonos where they are refugees. Hamid takes a magical realist approach to their journey: the couple walk through an open door in their city and emerge into Greece.

Throughout the novel, the writer introduces us to people from all corners of the world, who have walked through similar magical doors that lead them to other parts of the world. Although some of these people are peripheral to the plot, they throw light on the phenomenon of migration, helping us see how migration changes countries, cities, towns, neighbourhoods and people. Indeed, so much do immigrants change their new homes that even people who have never left those places feel that they, too, are migrants: “We are all,” as Hamid puts it, “migrants through time.”

The couple’s relationship moves, in their new homes, through crests and troughs. In Greece, and subsequently in England, they face the everyday ordeals that refugees face. The government measures to dislodge them from their occupied spaces are there. Refugees’ internal conflicts are also there. We see different groups (mostly ethnic) amongst the refugees that work towards a peaceful coexistence in an indifferent foreign land. We see, as well, Saeed’s and Nadia’s personal conflicts—lovers’ tiffs and roving eyes. The story hovers beautifully over how they work through their troubles and ultimately triumph. The government, too, does a laudable job and offers various humanitarian assistance. Meanwhile, an eerie detachment develops between Saeed and Nadia. The reader cares enough for them that he or she hopes for some miracle that will allow them to remain together. Hope flickers when they walk through yet another open door and reach America. They seem to become closer. However, while their initial struggle there bears fruit and life becomes easier, their bond weakens.

Along with the characters’ relationship, the narrative, too, loses colour and becomes grey. When the last straw of hope disappears and their separation is final, the reader almost cries in despair. At the same time, there is a relief as that they are beyond the crises and dangers that initially beset them.

The story leaves a bittersweet taste once finished—a novel hangover, “…for when we migrate, we murder from our lives those we leave behind.”