The soldier outside the station had one hand on the barrel and the other on the butt of his shotgun. There were two military trucks by the bus stop and two soldiers in the back-right seats of every bus leaving Urumqi station.

I arrived via long-haul train, 40 hours and just under 4000km in a hard-seat, from Beijing, where rumours were circulating about the extent of the military presence, needle attacks, Uighur and Han street gangs, and the validity of the reports coming out of Xinjiang. After four days I left with more doubts about why ethnic tensions in Urumqi arose and how they could be resolved.

Out the window of the taxi all I could see was another typical Chinese city: wide roads waiting for traffic from increased car sales; cranes brooding over new buildings. Red banners with white writing were strung up in the trees that lined the road, welcoming guests to the 18th Urumqi Trade Fair with slogans such as “Solidarity, Friendship, Co-operation and Development”.

After the July 5th riots that resulted in 197 official fatalities it was reported that Internet, international calls, and SMS had been temporarily suspended. That temporary suspension was still in place at the start of September. With the Internet out and news services not trusted Urumqi was running on rumour.

From my room I could hear a commotion on the street. I walked out and watched four young men waving Chinese flags lead a protest march down Youhao Road into the centre of town. There were as many spectators as protesters. 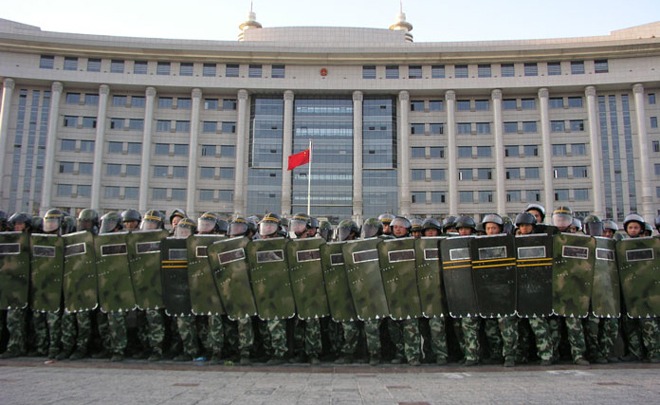 The protest was held by Han Chinese who wanted the government to provide greater security measures to protect them against hypodermic needle attacks by the Uighur. In incidents of needle attacks there had been no reported cases of infection or poisoning.

In Beijing official reports about needle attacks were never far from being rumours about Han children being attacked outside the school gate. For the Han such a rumour builds solidarity against the Uighur both in Urumqi and outside Xinjiang. But how does the rumour help or hinder the Uighur? Could it provide protection through fear? Show that they will not be out-numbered in – or out-muscled out of – Urumqi? Or will it incite more violence and acts of retribution? At present it seems the Uighur’s greatest fear would be losing the sympathetic ear of the international community.

A minute and a hundred metres down the road the protesters were blocked at a main intersection by riot police and military standing in front of twenty trucks, with more reinforcements arriving.

Protesters would push against the blockade. Those behind them would raise their camera-phones. In turn, the military would hold their line while police behind them took photos with a long lens, atop a police van, or on the ground with an over-the-shoulder video camera. The immediate threat of physical injury was surpassed by the permanent threat that comes from having your picture taken. Large numbers of Han protesters stayed away from the front line, preferring to watch from the side. Those who did venture forward had heated conversations but not physical altercation with police, most of whom were Han Chinese. The military were also Han Chinese, but due to over-stretched resources of the Xinjiang National Guard, they came from outside Urumqi.

After trying to push straight through the blockade for an hour the protesters turned right, breaking into smaller groups that followed Chinese flags crossing the bridge in the distance.

Sellers sold grapes on the sidewalk. Parents stood with their children behind school gates.

A pair of young men stopped a small car. While one stayed in front of the bumper the other circled. If my camera were as quick as my eye I could have caught the moment the man’s rage turned from the Uighur owner to his small red car. After several kicks at the side-panels a crowd gathered and the man at the bumper stepped around and smashed the passenger-side window. Other protesters pulled the aggressors away and waved on those who wanted to dwell. The car sped off, and a different pair of young men – one with a tiny megaphone, the other with a flag of China – came back to pick up the stragglers.

By the time numbers broke on to the Afforestation Square a line of soldiers three rows deep, with riot helmets and shields had formed to protect the pillars of the 12-floor symmetrical City Government building. The crowd’s chants seemed to echo from inside the building.

The mayor urged people to disperse via a big screen TV that overlooked the square. The same ten-minute recorded message was shown many times in the afternoon and evening. 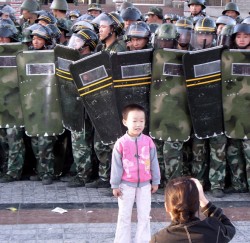 I was encouraged and sometimes physically pushed towards the front line to take photos. “You’re safe, you’re safe,” the middle-age man urged me. He had just asked me if I was religious – I’m not – before telling me “All Uighur are Islamic terrorists”. In someone’s second language their political and religious views lose their subtlety.

As the sun set I watched a mother prompt her daughter to pose in front of the military line so she could take a photo of her.

Within an hour police and soldiers outnumbered the protesters. Finally, there was nothing left to do but push against the military line. This lasted no more than half an hour before people moved on to get off the streets before dark. The buses had been turned over to the military to shuttle soldiers around the city.

On Friday morning there were no cars on the street and trucks, soldiers, fences and wire barricades at every main intersection. All roadblocks in the south of the city encircled the Grand Bazaar, facing out – the implication being that the Han Chinese would infiltrate and retaliate in the Uighur area. Most of the remaining Uighur populace (12% of the 2.3 million people who live in Urumqi) live or shop in this area.

I could judge the danger of neighborhood by the level of security: from road spikes, to eight-foot high fences with row on row of thirty centimetre spikes sticking out, to soldiers in fitted carbon-fibre riot gear, complete with a clapping cod-piece. It was an awkward moment when I was joined by eleven of these soldiers at the public urinal.

The number of people on the streets was up on Saturday. More shops were open and a greater flow of traffic was allowed through the roadblock checkpoints. I could play 8-ball on one of the tables by the street. I even gambled on a game with pool-shark and won a watermelon.

There were still, however, suspicious looks from those on street corners wearing shop-issue military outfits and sporting red armbands. By facial characteristics I would assume that these community corner soldiers (usually middle-aged women in cross-trainers) and patrols (upwards of four or five men carrying rubber clubs) were Han. Although their role remained unexplained, I was told that the military was “limited” in what they could do.

If my stubble had the makings of a moustache the Chinese mistook me for a Russian, and Uighurs thought I was one of them. When locals saw my pen and notebook I had to explain in broken English that I was not a journalist: “I’m a lyricist. A song (operatic gesture) writer (scribble gesture).” Eventually I would give in and click my fingers and croon a couple of lines. I guess I passed.

Over dinner other travelers talked about camera settings and being arrested by the police (though the word we should use is ‘detained’.

On my last day I climbed the famous Red Cliff and looked out on Urumqi, just another Chinese city under construction: a four-lane highway being turned into eight lanes; another square dirt hole being dug to fit another square peg into the Urumqi skyline.

Everyday scenes played out as usual, even if the costumes were out of place: fruit dealers wore the military gear, other street-walkers wore the police uniform, and even the headdresses of some Uighur women, while lovely flower patterns, were military camouflage colours.

Tensions had eased. In the centre of town a UTV television crew was filming in front of a road-block, asking questions of people who were more than happy to stop and answer, even if the return of traffic noise from cars, buses and bikes made it hard to hear them.

Only three days after the protest Urumqi had its buzz back, but everything out west is far from normal.

David Maney writes journalism, short stories, plays, and song lyrics for musician alison avron. You can find him online at www.jotternotes.wordpress.com or at any good local bookstore.