Yangon, summer, and the eastern stairway of the Shwedagon spills out into shops and stalls—all the bric-a-brac of Buddhism—the bells, the beads, the monks’ bowls and robes, flights of steps leading down all crowded with people, stacks of books and lacquerware for sale, strings of jasmine flowers, piles of bright-painted toys, papier-mâché ja (tigers) and sin (elephants) and mway (snakes), and then tea shops and trishaw drivers at the foot of the street, music from loud speakers, more people passing, kids playing, taxis waiting, and off to the side those little bamboo cages all ripe with birds. For a few kyat, a bit less than a dime, you can release one of these sparrows in a kind of prayer, some essence of their freedom going to whatever your hope might be. The Burmese believe in such cause and effect. Do the good deed and you will get the good response. Do the bad deed and you will get the bad response. Hard to argue with such faith, really, though anything you think about too much becomes problematic.

Take the so-called lucky birds, for instance, the sar kaley. According to the trishaw driver, they have in them an element of bad karma also. The more we buy, as the driver says, the more the man will be encouraged to catch. Owners sometimes mix opium with the seeds, so that the birds will return to their cages. Children keep them as pets, tie sewing thread to their legs. Some feed them to cats or snakes. Others deep-fry the tiny creatures whole—feathers, beaks, feet—eight or nine to a plate, each cooking down to about the size of a thumb. 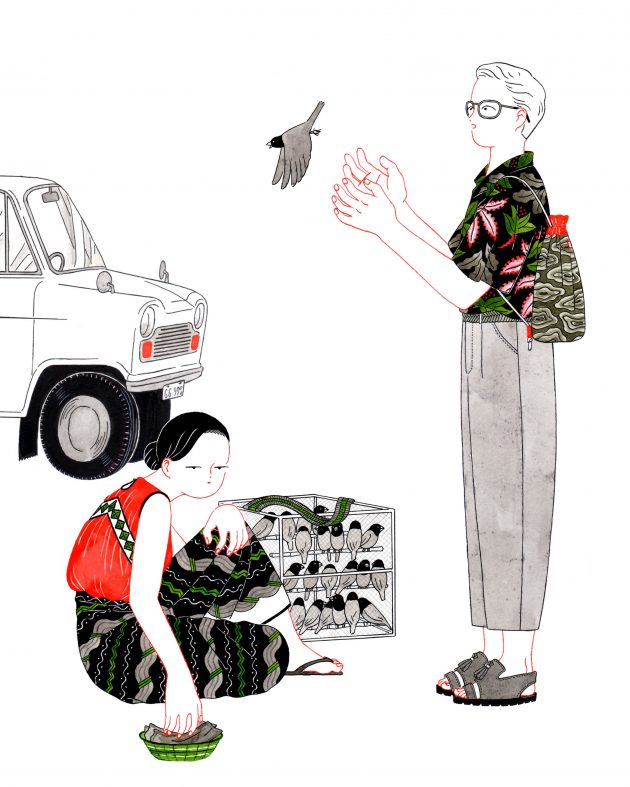 No perfect way to earn merit in the end. Even something as simple as a bird becomes complicated. Yet still those bamboo cages at the foot of the stairs, a few kyat, and you’re compelled to have this thing all threadbare and shivering in our hands. And what was the wish again? Did you even have a dream in mind that you wanted to release? Who knows, but that mothy chalk of feathers, the tiny racing of heart against your fingers, and you press so long you nearly suffocate the poor thing in your hands.

Even here you should sense enough to worry. Even as early as now you might want to just try holding the creature a little more loose if possible, bird like a knot of rags when you finally toss it free, the bundle going in an arc. It’s awful, bird hitting the street hard, grubby little clump in the middle of everything, trying to untangle itself, wings clicking against pavement, so easily crushed you can’t even catch another breath.

There’s chanting from a loudspeaker somewhere, red streaks of betel along the gutter, and someone bumps you awake. They apologize, you apologize, and the next thing you know is a truck approaching. An old lorry loaded with—actually, it doesn’t seem to be loaded with anything—giant truck riding all high and empty and loose, bird in the middle of the street.

It’s as if you’re paralyzed at the curb, gathering approach of wheels rattling closer and heavier and bigger. You wince as the truck passes. You look away to see the pair of boys standing in the bed of the truck as it goes, no one noticing this little drama of yours, you just standing in the gutter like an idiot.

Sooner or later you’ll have to turn to face it—whatever’s left of the thing—and there it’ll be, bird all puffed up and bouncy on its feet, little guy all like, Whoa! Ha! That was close!

And then a car pulls around to the street—a taxi, powder blue, flowers tied to the grill—but this time you’re off the curb and shouting for the bird to go!

You shout at the thing, flap your arms and holler for it get away—Pien! Pien!— bird staring at you, trying to decide how crazy, how dangerous you are. It gives a funny little shake and shouts—Peep!—like it’s got news for you, whacko!

One huff and it’s off in the air toward the trees, wings flickering against the light. Just the relief of it going, the Shwedagon presiding above, the air silvery in the light, and this taxi coming (almost forgot the car approaching), car brushing so close it tugs at your clothes. And you’re like the bird—all shaky and startled and alive—and you’re all like, Whoa! Ha! Asshole!

And once more nothing—not one single thing—none of this will turn out the way you hope. Even by now you should know this. That is what a bird is worth. A few kyat, faint musk of feathers on your hand, and you get a glimpse of just how small you dream, how different from the wish it all will be.

William Lychack has lived in Myanmar and has visited there almost every year for the last twenty years. His work has appeared in The Pushcart Prize, The Best American Short Stories, and on public radio’s This American Life. He is the author of a novel, The Wasp Eater, a collection of stories, The Architect of Flowers, and a forthcoming novel, Last Perfect Day. He currently teaches at the University of Pittsburgh.