The first time I thought about traveling to Vietnam was thirty-some years ago, and what I thought was that I didn’t want to go, even though the U.S. government would have paid for the trip. At that time, the Vietnam of my imagination wasn’t the land of saffron sunlight, purple clouds like eggplants in the air, and cool, damp, crumbling concrete it is for me today. Rather, the Vietnam of my anxieties was an asylum of sucking, gray mud and olive drab, a place where I’d get my ass skinned. I couldn’t imagine a kid like me in a hellish place like that. What would I do? Whatever would I do? 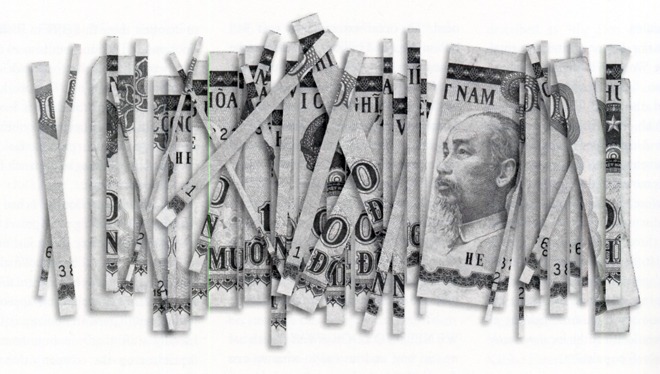 I’ll never know the answer to that question, a fact brought home to me when recently, rifling through a box of memorabilia in preparation for writing this essay, I found my draft card, and even after all these years it rattled me. Thankfully, I was never called up, as I’m sure I wouldn’t have had the imagination then to say no, though I’ve since outgrown many of my infantile assumptions, including that bourgeois conceit, the righteousness of authority. In the same box I came upon a Vietnamese ten-thousand dong note I had squirreled away, not a lot of money by American standards, but meaningful to me for its picture of sailing junks on one side and, on the other, a portrait of Ho Chi Minh with the thready beard he wore in old age. I looked at the portrait, noting Ho’s distant gaze, the gaze of a strategist, of a man who considers eternity from the point of view of the past, and wondered briefly what my wife would say if I grew my own beard out.

My goatee and shaved head perplex many Vietnamese because in their country beards are for venerable old men like Uncle Ho and bald heads for monks, and I am neither. Their confusion revolves, as so often with Americans in Asia, around my role in life and what deference I am owed. We Americans as individuals are inevitably paid more of this intangible currency than we deserve (a transaction I am uncomfortable with) because America itself is economically powerful. To the good, however, in Vietnam my beard and clean skull afford me the opportunity to visit a barber and undergo rituals of grooming that, in their unfamiliar way, are beautiful and revealing since they are both personal and not my own.

I discovered this a few years ago on the outskirts of Hue when, cycling through a quiet neighborhood beneath the dappled shade of overarching trees at the height of the morning, I stopped for a rest and a shave. The barber I had happened upon, unused to foreign customers, eyed me in alarm as I lay my bike on its side in the leaf litter beside the road, but quickly recovered his composure and indicated that I should wait my turn outside his shop, a three-sided shack of woven bamboo matting with a concrete floor and tin roof, economically appointed with a pair of high chairs upholstered in red naugahyde and a turquoise sideboard and mirror combination. A collection of photographs of young women modeling different hairstyles, vintage early ‘80s, hung above the mirror, and an electric fan, switched off, squatted desultorily to one side.

As I waited, a small crowd gathered in the street to watch. By the standards of that quiet neighborhood, I was conspicuous: overlarge, fair-skinned, and disreputably dressed. Suddenly self-conscious, I thought about moving on, but no one seemed to mind my being there, so I stayed. People were merely curious, except for the barber, a young man, immaculate in gray slacks, a white, short-sleeved shirt, and sandals, who glanced at me from time to time with a look of foreboding.

When he had finished with the client he was attending, the barber beckoned me to his chair and draped a green towel across my chest. In the mirror, I watched his hands, fine boned and gentle, flutter about my head like a pair of birds. He looked inquiringly into the eye of my reflection, and I, dragging the flat of my hand across my stubbly cheeks and pate, showed him what I wanted. He hesitated and then gave a single nod, and as he stepped to the sideboard to prepare a straight razor and soap, I noted that the nail of his left little finger, long and sharp as is the style in Vietnam, was trembling. When he was ready, the barber reclined the back of my chair and, standing behind me, touched the bottom of my chin with his fingertip. Obediently, I arched my neck and closed my eyes and felt the cool tongue of his badger brush lick my exposed throat and his thin steel against my skin.

Half an hour later, snapping the green towel smartly, the barber released me from his ministrations. With a craftsman’s hand, he had assiduously scraped my skull, my cheeks and jaws, as well as my brow, my neck, my nose, and the rims of my ears, which he had also laboriously cleaned with a tiny metal spoon. As we stepped together into the glare and shocking heat of the street, I indicated my appreciation with signs and gestures, and for the first time, he smiled. I asked him how much I owed him. I can’t recall the exact amount, but it was pitifully little, so little, in fact, that I was embarrassed to pay it. Instead, I gave him a one-dollar bill. He looked at it in astonishment, then into my eyes, and his smooth, young face began to crumple. He took both my hands in his and thanked me for the boon. I didn’t know what to say. A dollar, nothing to me, was everything to him, and when the impact of this incongruity hit me, I felt a lump begin to form in my throat.

As I write, I have laid my souvenir ten-thousand dong note and an American dollar bill side by side on the table next to my computer. One is green, the other printed in red. From one, George Washington, the successful revolutionary, now contented and well fed, looks me directly in the eye as if between us there is an understanding; on the other, a hollow-cheeked Uncle Ho gazes into the distance, ignoring me completely. In 1907, when he was a student activist in Hue, Ho Chi Minh roved the city with his friends giving haircuts, often received involuntarily, to passersby who still wore the traditional bun that had come to symbolize Vietnam’s feudal past, chanting:
Comb in the left hand,
Scissors in the right,
Snip! Snip!

Cut out the ignorance,
Do away with stupidity,
Snip! Snip!

Looking at Ho’s portrait, I think about the American wars of aggression in Southeast Asia, thrust upon all of us by an unruly Pentagon and five cynical administrations that to some degree believed in a communist conflagration they had themselves lit in our imaginations, then stoked with lies and secrets (many now a matter of public record) in efforts to win elections. And I think about the incongruity of this fantasy when laid side by side with the crystalline idealism of Ho Chi Minh’s liberation movement. And I think about that young barber. How little had passed between us — and how much. We had not spoken, but had for a brief time been melded, hand to head, and between the soft pads of his fingertips and his keen blade, he had taught me the unambiguous economics of his heart, which unlike mine understood the razor’s edge. I think about what he had asked of me that morning, what I had given, and the disparity between what it had meant to him and how little it had cost me. And I think about how powerful I was, with my dollars and my ability to insinuate myself into his neighborhood halfway around the world.

And then I think about who had held the razor to whose throat, and how thin is the line, the thin, red line, between eternity and a close shave, and I am humbled.

DUSTIN LEAVITT teaches literary nonfiction writing at the University of Redlands and contributes to a variety of publications. His travel essays have appeared in Best Travel Writing 2004, 2005, and 2006.He contributed “Japanese Tattoo” in KJ47, “Balinese Canoes” in KJ52, “The Mystery of Mastery” in KJ52, and “Dance Kitchen” in KJ58.