It is not uncommon for Kyoto’s streets to be filled with individuals immersed in the artistic and cultural atmosphere that suffuses the city. For the very first time, during September 1-7th 2019, those individuals represented museums of art, culture, history, and science from around the world. This year’s International Council of Museums, also referred to as ICOM, convened over 4,000 museum representatives and enthusiasts who spent the week discussing the state of museums in today’s world with historic Kyoto as the conference’s host.

The international conference, held at the Kokusaikaikan convention center where 27 years ago the Kyoto Protocol was negotiated and signed, was fueled by the energies of museum specialists convinced of their institutions’ museums ability to effect change in the world. The consensus across panel discussions and committee assemblages was that the museum could no longer isolate itself as an exclusive hoard of expertise but must reach out to a local as well as an increasingly connected international community.

ICOM, founded in France in 1946, claims to be the largest international cultural association in the world, with 44,500 members from 138 countries and territories. ICOM Japan was established in 1951 and this is the first time that Japan has hosted the conference.

This year aside from the ordinary convening of committees and other initiatives, the conference organized discussions on the theme of “Museums as Cultural Hubs: The Future of Tradition.” In response to “global political, economic, and social changes,” conference attendees addressed the role of museums as voices in the conversation of contemporary issues as well as forums for fostering connections within and between local communities.

Among featured discussions was a panel addressing the colonial history of many international museums’ collections. The potential of the decolonization and restitution of art and heritage was discussed along with the principle that museums hold this material “in trust” aspiring to equal access and preserving material for future generations.

As with many recent major international conferences, and particularly those following this summer’s G20 Summit in Osaka, the discussions were often structured with United Nations Sustainable Development Goals (SDG’s) in mind. Environmental concerns were pushed to the fore by Brazilian photographer Sebastiãn Salgado’s keynote address presenting images from indigenous groups in close proximity to widespread forest fires currently consuming the rainforest. Kengo Kuma used his keynote speech to advocate for a satoyama economy centered around sustainably built museums that utilize local materials and that in turn support community-based craftspeople.

The most contentious of the conference’s debates concerned an initiative to change the definition of “museum” in the ICOM Code of Ethics. Though this Code is not legally binding on individuals, it does encapsulate the intentions and aspirations of the international community and thus exerts ethical weight on its members.

Conference participants debate the definition of “museum” in roundtable discussion

The newly proposed definition, nearly doubled in length, was contested for its breadth of descriptors. Terms included in the proposal such as “democratizing,” and “polyphonic spaces for critical dialogue,” were challenged as not specific enough to reflect the diversity of the growing role of museums on a global scale, as well as for operating more as a general mission statement rather than a practical definition. Concerns were also raised about funding implications in countries where governments might find gaps in the new definition to justify withdrawing financial support. Though an updated definition was widely considered necessary in principle, the drafted alternative, to be voted on at the end of the conference, caused many to call for a longer review period, ultimately resulting in over 70% of participants opting to postpone the vote until next year.

Another resolution voted on during the conference was an effort to bring delegates of Asian art museums into the routine functioning of ICOM, which has yet to fully breach its Western bias. Thus far, as the President of the ICOM Kyoto Organising Committee Johei Sasaki said, Japanese participants had been inhibited from participating in a wide variety of these meetings since they were held in either French or English without wide access to simultaneous translation. As this was the first conference held in Japan and the third in Asia, Sasaki sought to expand access to information, supporting the 1,866 Japanese participants. Asia’s potential contribution to the community is vast, as museums across Asia are flourishing with both domestic and international attention and Asian art holdings play significant roles in major collections around the world.

Other concerns within the Asian art world were also raised for debate. Education in conservation practices, particularly in Japanese arts, is not easily accessible outside of Japan. Anne Nishimura Morse, the William and Helen Pounds Senior Curator at the Museum of Fine Arts, Boston, presented on the urgent situation of the next generation of conservators and Japanese art specialists. She said that by 2020, over 75% of specialists in Japanese art will be of retirement age. By working with ICOM and the United States-Japan Conference on Cultural & Educational Interchange (CULCON), Dr. Morse aims to provide young curators with wider access to education and the sometimes exclusive communities of Japanese art and heritage specialists. 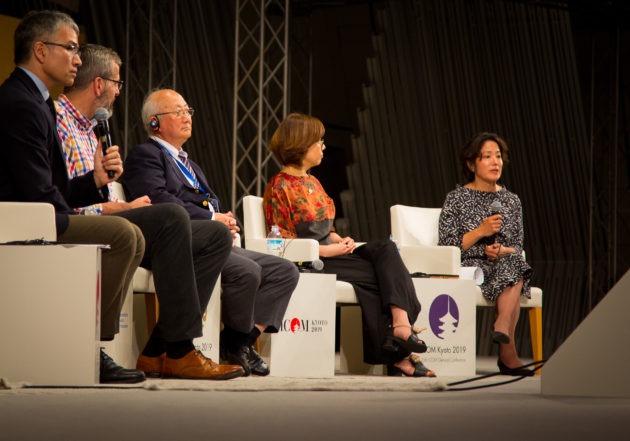 “What I worry about is creating networks where people can be in touch with each other,” she said in an interview. “Since I work in Boston, it’s a lot easier for me to say, ‘Oh, we don’t have any factions.’ It’s a lot harder in Japan because different schools have different loyalties and that is just a natural order.”

With CULCON and international organizations like ICOM, digital access to information is growing along with online communities informing curators of educational and employment opportunities.

“Ironically, there is more information that is available through digital means but if you don’t have personal contact it doesn’t do you much good either,” Dr. Morse said. “It’s got to be a balance between the two.”

Dr. Morse was recently awarded the prestigious Order of the Rising Sun, Gold Rays with Rosette, by the Emperor of Japan for “contributing to strengthening bilateral relations and promoting mutual understanding between Japan and the United States in the field of fine arts.”

As ICOM develops as an international community in order to incorporate a more diverse range of voices, it is only natural that conflicts arise. Whether it is the achievement of a common understanding of what the museum should stand for or the process of engaging in debates which might invigorate change, the museum community is united in looking towards the future. ICOM’s commitment to communication and collaboration along with the ambition of all those gathered in Kyoto this week is sure to continue the process of keeping museums as vibrant and contemporary institutions, benefitting local and international communities.

KJ is posting a series of articles on ICOM Kyoto 2019 to provide more context on the diverse and important topics discussed at the conference. We invite you to continue reading with The Politics of Memory: ICOM Kyoto confronts the role of testimony in museum narratives by Codi Hauka.