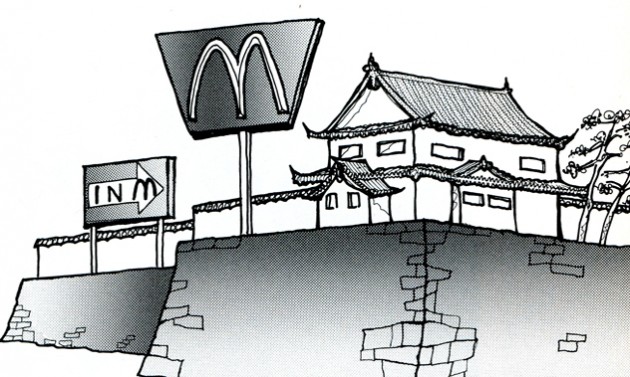 The nation had just celebrated his 75th birthday the week before, and he had never been to McDonald’s! Billions sold to his loyal subjects throughout the land, and he had never visited one of those bright, modern establishments of yellow and red that he’d seen from the shaded windows of the limousine on his rare excursions from the palace. Of course he had often tasted the company’s products, but only after one of the imperial retinue had taken his order for an imperial Mac, imperial shake and imperial fries to go, and then told an underling, who told a guard, who summoned a carefuly screened and utterly trustworthy commoner, who would actually enter one of those premises and colloquially purchase the desired items, which would then be served to his imperial majesty on a special imperial fast food tray in the imperial study.

But he had never had the pleasure of seeing for himself what all this involved. He hadn’t had any pleasure of that sort since, as young prince and heir to the throne, he had shaken off his chaperones during a visit to Paris and spent a whole day all by himself. It was the first time he had ever been alone in public; the furor over his sudden disappearance had approached international proportions until it was discovered that he’d spent the entire day riding the Metro. The ticket he’d used was one of his most prized possessions.

Now, nearly 50 years later, he’d managed to shake off his attendants once again, and after wandering through underground shopping malls for some time, disguised in a baseball cap and sunglasses, the Emperor stood at last before a McDonald’s at closing time, just looking, closely examining the details of this impressively efficient establishment.

After a few moments he entered confidently, and in carefully rehearsed non-imperial (though not quite common) dialect, recited his order to the suddenly attentive clerk: “One imperial Mac! One imperial Shake! One imperial Fries! To go!”

He observed his loyal subjects eating their quickly and efficiently served food around him, and a modern contentment filled his heart.

The clerk had not moved, but stood shaking, mouth open; the manager had come. The manager whispered to the clerk, who then stood stiffly at attention and said: “Yes, sir! One imperial Mac set coming up!” and rushed off, to return almost at once with a neatly packaged order. The Emperor then realized he had no money; of course he never carried money, but still he fumbled helplessly in his pockets, as the manager again whispered to the clerk, who then said in a low voice: “And congratulations, sir! As our final customer of the day, please accept this order as a gift, compliments of McDonald’s!” Both clerk and manager then bowed deeply until the Emperor had left, tightly holding his prize. The manager then rushed to the telephone.

The Emperor had greatly enjoyed his imperial Mac and fries in a nearby park, amidst the romance of his loyal subjects, and was just taking the last imperial slurp of his imperial shake through his imperial straw when he raised his eyes and found himself surrounded by the prostrate forms of dozens of his retinue, who had somehow found him and come to escort him back to the palace. He rose and stood a moment gazing around him, savoring the last of this memory. Then, placing his bag carefully into the trash can so efficiently provided, but keeping the bright red fries container to put beside his Metro ticket, the Emperor let out a long sigh and was escorted away, resigned now to the remainder of his imperial life.

Palace administrators saw to it that the “McDonald’s incident” was carefully hushed up; no word of it has ever reached the press, until now.