Where is the Wild?

“I love the wild not less than the good,” said Henry, in the Higher Laws chapter of Walden, and “In wildness lies the preservation of the world.” Henry was wild about wildness, just couldn’t stop talking about it one way or another, and who can blame him, he saw it disappearing.

That was a long time ago, over 150 years now. But even back then, when the wild must still have been pretty much all over the place, Henry was already condemning its decline, already lamenting the relentless incursion of the artifactual.

His were admirable early sentiments, though they fell on mostly deaf ears in those times of righteous conviction regarding clearcutting of the greater soul. Walden wasn’t a big success until well after the results of Manifest Destiny had become manifest. 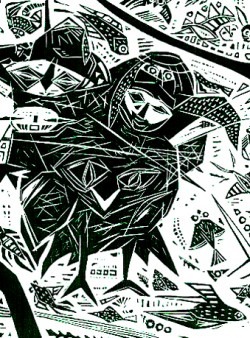 Since then, it seems we still haven’t realized that the wild is the counterpart, the balance, to the wild we carry in ourselves, in every cell and sinew of our bodies: remove the wild from our outer lives and in our hearts and souls we suffer, our compass goes awry. All who still revere the wild know this, as Henry did; he recognized it as the greater part of the soul. So now, some 150 years later, where has it gone? Is it out on the lawn? On the hiking trail? In the Winnebago window, the satellite image, nature video, national park, endangered species, inner child, urban shaman, modern warrior, rabid zealot? Is it caught on the Net? Can it be seen with commuter eyes?

In our nowadays, with government keeping us anxious about government, business keeping us unbalanced and selling us the next step at a discount, while our own actions reduce whatever wild remains, the more we are channeled by the careers, garments, incomes, appliances, habits, sciences, arts, rebellions, religions, schools of thought and mannered ways we think comprise us, the less we are the creatures of creation, one thrust of all the universe, and the more we become the static but remarkably lifelike exhibits in that big fancy museum of our own construction we call modern life.

Commensurately, the less informed we are by what is ever ongoing in the currents of the universe: the sun that is shining, tides that are flowing, moon rising, spiraling stars, galaxies whirling, blooms that are opening, seeds that are falling, scattering on all the winds and swelling with the rain; we are no longer fed by the wild, that in us is ferally fertile, and so do not germinate, let alone grow into what we were all engendered for, which is beyond dimension, in the seed of wildness.