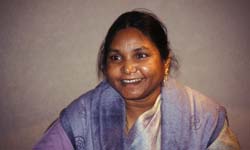 Astonishing viewers at the Cannes Film Festival, the 1994 film “Bandit Queen” thrust Phoolan Devi into the international limelight. But Devi criticized the film for being overly graphic and for leaving out major events, notably her resilient fight since childhood to regain land purportedly stolen from her father.

Devi was already famous in India, particularly in her home state of Uttar Pradesh, where her exploits had captured the popular imagination. As a low-caste illiterate young woman leading a gang of upper-caste bandits, the gender and caste anomalies made for a double whammy.

Devi captured national headlines in 1981 after reportedly massacring 22 upper-caste men in the village of Behmai; one version called it an act of vengeance for when they’d held her captive, gang-raped and otherwise humiliated her. To some she was a heroine, vindicating the countless lower-caste Indian women and men who have no recourse when exploited by members of upper castes. To others, she was a threat to the 2500-year establishment of India’s refined apartheid system, or simply a cold-blooded killer.

In 1983, she turned herself in, and languished in jail for eleven years. After release in 1994, she raised eyebrows and blood temperatures by running for and winning a Parliamentary seat.

This KJ interview took place in 1999 when Devi visited Kyoto. She’d just lost her second Parliamentary bid, but won her third bid later in the year.

Phoolan Devi was murdered by a group of masked gunmen outside her home in July, 2001. The confessed assassin called it vengeance for the murders at Behmai, though others maintained it was a pre-election political conspiracy.

Catherine Pawasarat: What is it you hoped to achieve in Parliament? Do you plan to run again?

Phoolan Devi: Of course! My main goal is that things that only the rich and privileged have enjoyed until now should also be given to the poor: for example, drinking water, electricity, schools and hospitals. There should be at least one hospital for twenty small villages. Right now, there’s only one hospital for an entire district, so only the wealthier people who live in the big cities have the privilege of going to hospitals, while the poorer rural people – 70 to 80 percent of India’s population – don’t.

The international media reports that capitalism is bettering the status of women in India.

It’s still a male-oriented society, so women are kept under veil and inside the house, and they haven’t been given equal status. I’d like there to be seats reserved for women in government posts. Women should be educated in schools. And people should not be forcing them to get married at a very young age. In India girls as young as only ten years old are married off to someone! That system should be abolished. Whether they are a boy or a girl, they have the full right to decide their own future.

There are people supporting these same ideas, but there’s still a lot of reservation: if five to ten percent of people support these ideas and fight for them or speak openly about their beliefs, other people will say, “He’s out of his mind.’

In the big cities now, changes are happening and women are beginning to get better status, but not in the villages. In India, if, for example, a limited number of girls get educated and start working, then people start making stories about them: “Look, they’re messing around.’ So my advice to such women is: don’t be afraid of such rumors – face them boldly and bravely.

Some women give up, because it seems like such an insurmountable battle.

I give this advice to such women: just throw away the veil, come out! Fight until the end of your life! Against anyone who will stop you – your father, society, your son – you must fight them to the end, if you want your freedom.

One of your favored causes is the protection of women against violence, especially rural women.

Women have to protect themselves. For example, if they are treated in a bad way – sexually assaulted or assaulted in any way – they shouldn’t keep quiet, they shouldn’t think, “If I take my case to the police, if I go to court, people will say I’m bad.’ That’s no good. Don’t keep quiet. Get up, fight for your cause, for yourself. Don’t let other people snatch your freedom, your dignity.

You also formed Eklavya Sena, an organization that teaches women and men from lower castes self-defense.

Yes! It’s still going on; the school teaches them boxing and a discipline that involves fighting with sticks. In small schools in villages we’re trying to teach girls so that they can protect themselves. Also I’ve supported many schools in Uttar Pradesh, Bihar and Madhya Pradesh states that are running such programs.

I also tell women to get themselves educated. I tell them that when they get married, they shouldn’t have many babies – just one or two – then educate them well, and let them determine their own lives.

What do you most want to achieve in this lifetime?

For myself, I don’t want anything; god has given me so much. For people I really want … the most important thing is equality. So that people can get employment, they can get proper food and drink, and also to be educated. And especially women – now they are really treated very lowly, like shoes! They should be treated on an equal basis. And like other countries that have progressed and have comforts, I also want my country and people to progress that way.

Now you’re very famous, and you were born into a low caste. How do higher-caste women in India relate to you?

Whenever they meet me, they are all smiles, and very polite, and treat me very well. They say, “You fight for women.’ But what they actually think, I don’t know.

What do you feel they think?

They think that I am also a woman.

So they respect you.

Yes, they respect me.