While gin has traditionally been brewed in port cities with access to the world’s supply of spices and ingredients, The Kyoto Distillery aims for a far more local flavor profile for its signature spirit, KI NO BI Gin. While juniper remains a traditional element of its essence, the abundance of regional botanicals has inspired brewmasters to create a distinctly Kyoto style. This involves seasonal harvests where the distillery reaches out to volunteers to help gather the stocks of ingredients which will be used to brew flavorful libations throughout the coming year.

On a crisp autumn morning, members of the broader Kyoto Distillery community gathered for the yearly harvest of yuzu, one of the local botanicals that creates the distinct flavor of KI NO BI. Including a large contingent of local bartenders and friends of the Distillery, volunteers bundled into cars and drove to a small orchard in the middle of rural Hyogo Prefecture dotted with the bright yellow Japanese citrus. 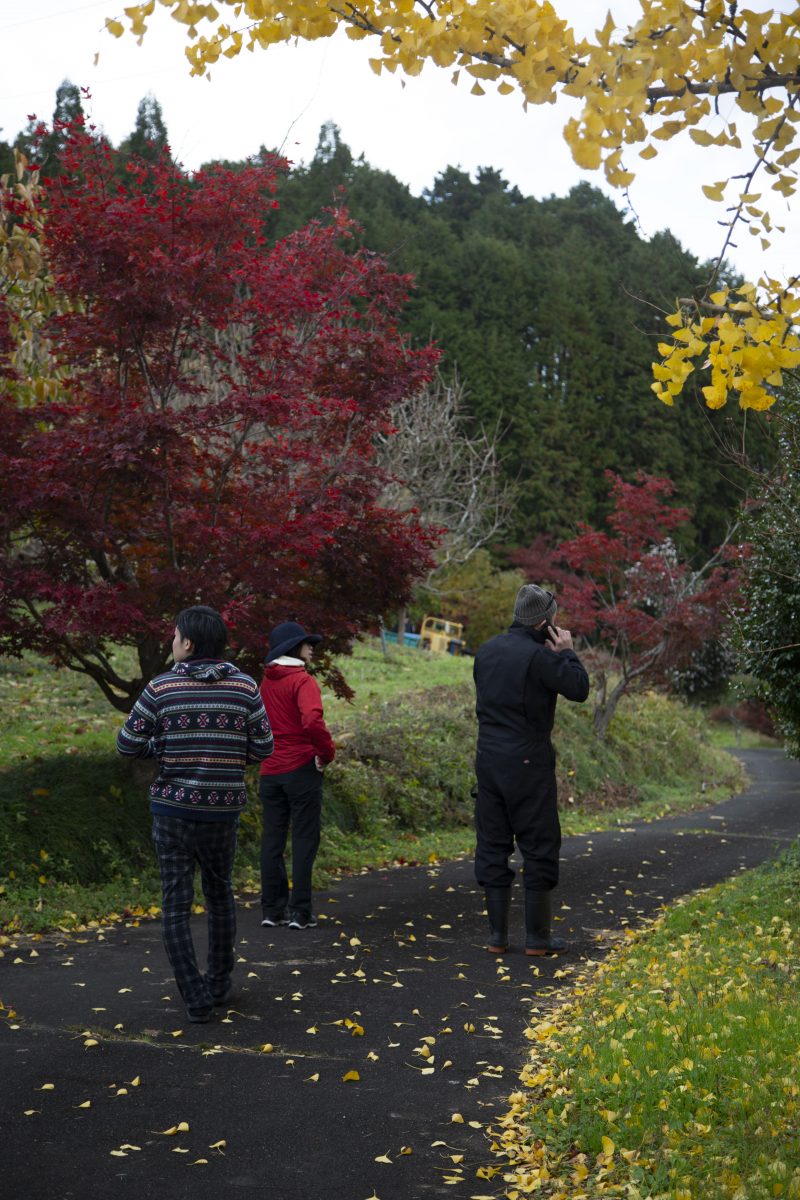 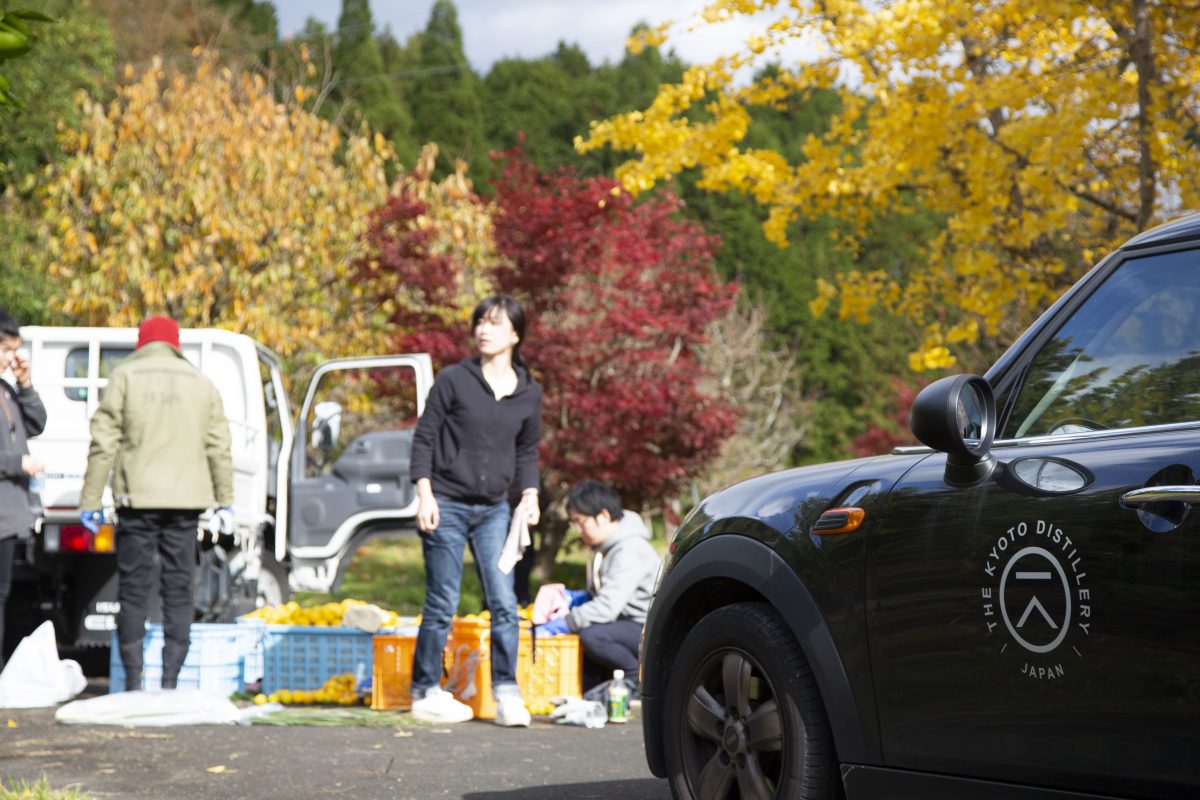 Yuzu, unlike its citrus relatives, typically has a gnarled and knobbly exterior and its interior is packed with seeds. Though it would take pounds of the fruit to fill a single cup with juice, the intensely aromatic rind contains a tart, bright scent, lending to the fruit’s distinctly vibrant, floral, sour flavor. Extracting yuzu’s essential oils in the distillation process, brewmaster Alex Davies builds the unique flavor profile of the Kyoto gin. Along with yuzu, Kyoto Distilleries source local green tea, ginger, red shiso (perilla) leaves, bamboo leaves, sansho pepper (a Japanese relative of Sichuan peppercorn), and other ingredients from the region. 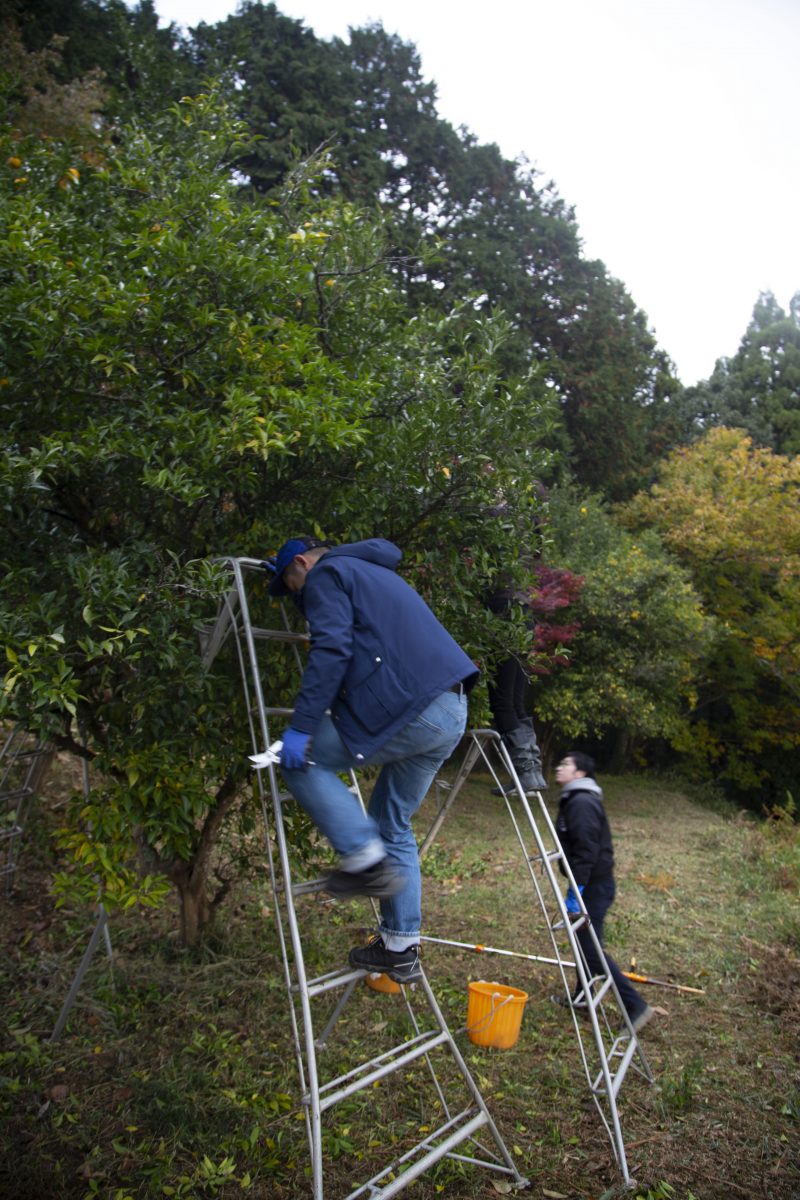 With the bolder members of the group high atop step ladders reaching for the fruit at the trees’ highest branches, the rest of us scrambled through the lower boughs collecting fallen citrus and avoiding the long, stinging thorns that cover the trees. The orchard owner offered his advice on harvesting the yuzu (including how best to avoid the thorns) and brought a handful of homegrown lemongrass for a volunteer who runs a handmade gelato store in Kyoto. Splitting the work between the 15 volunteers, the harvest progressed steadily, warmed by intervals of late autumn sunlight. By the end of the afternoon, plastic crates were overflowing with hundreds of citrus. 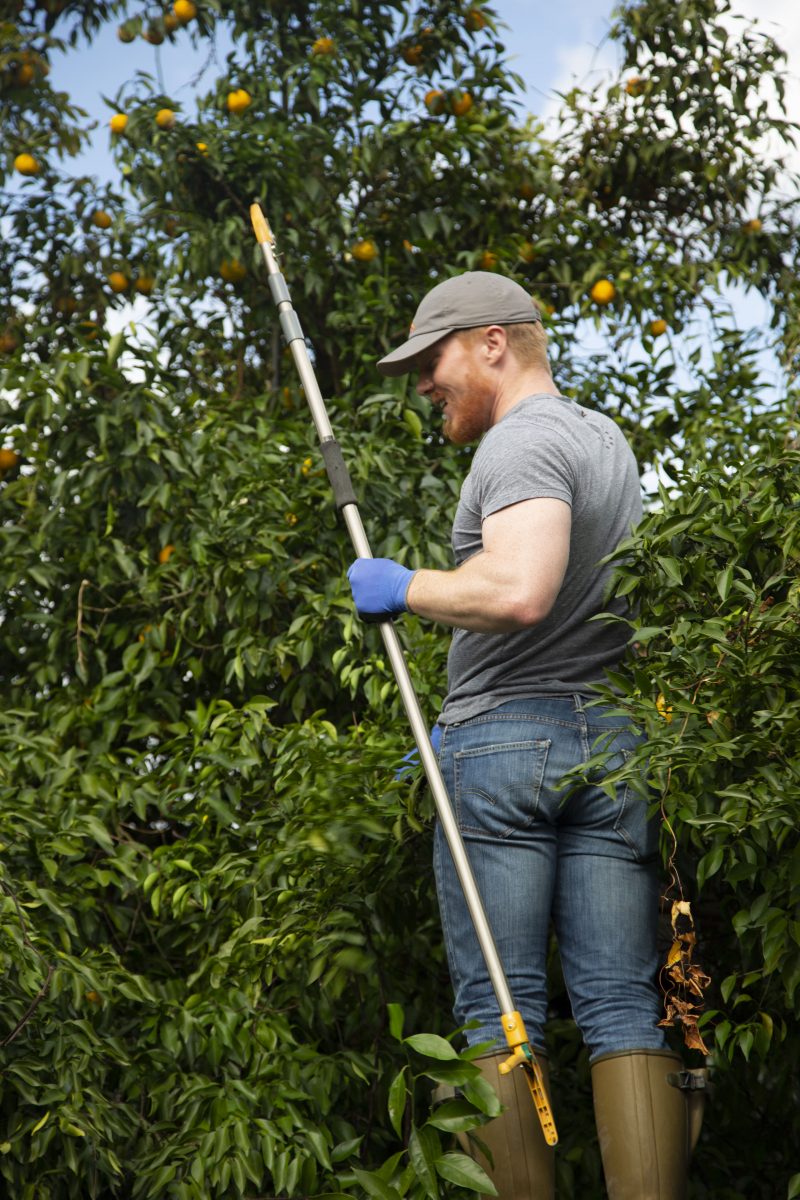 KI NO BI was first released in 2016 at the forefront of a wave of craft gin, a trend that has only increased in the last half decade. Gin has historically served as the less time-consuming alternative to whiskey, which can take 10 to 20 years to mature. With the boom in popularity of Japanese whiskies and a thirsty international market, producers have again turned to gin to fill the void left by diminished stock of aged whiskies. Though larger Japanese companies like Suntory and Nikka have begun to produce their own gin, Kyoto Distillery has the distinction of being the only distiller in the country that limits its production to gin alone.

KI NO Bi brewers distinguish themselves from a growing field of gin producers through a particular form of distilling. The majority of gin combines all ingredients during the distilling process, heating the spirit and rendering oils and flavor from the botanicals in a form of “one-shot” distilling. At Kyoto Distillery, each ingredient is separated and heated to a specific temperature which will optimize its particular flavor essence. This is a meticulous process, as the flavors derived from botanicals are oil based and will evaporate or denature if overheated. The drawback to this method is that it makes for a highly time- and energy-consuming distilling process but the benefit is that KI NO BI is blended out of spirits enriched with each flavor profile at its finest. 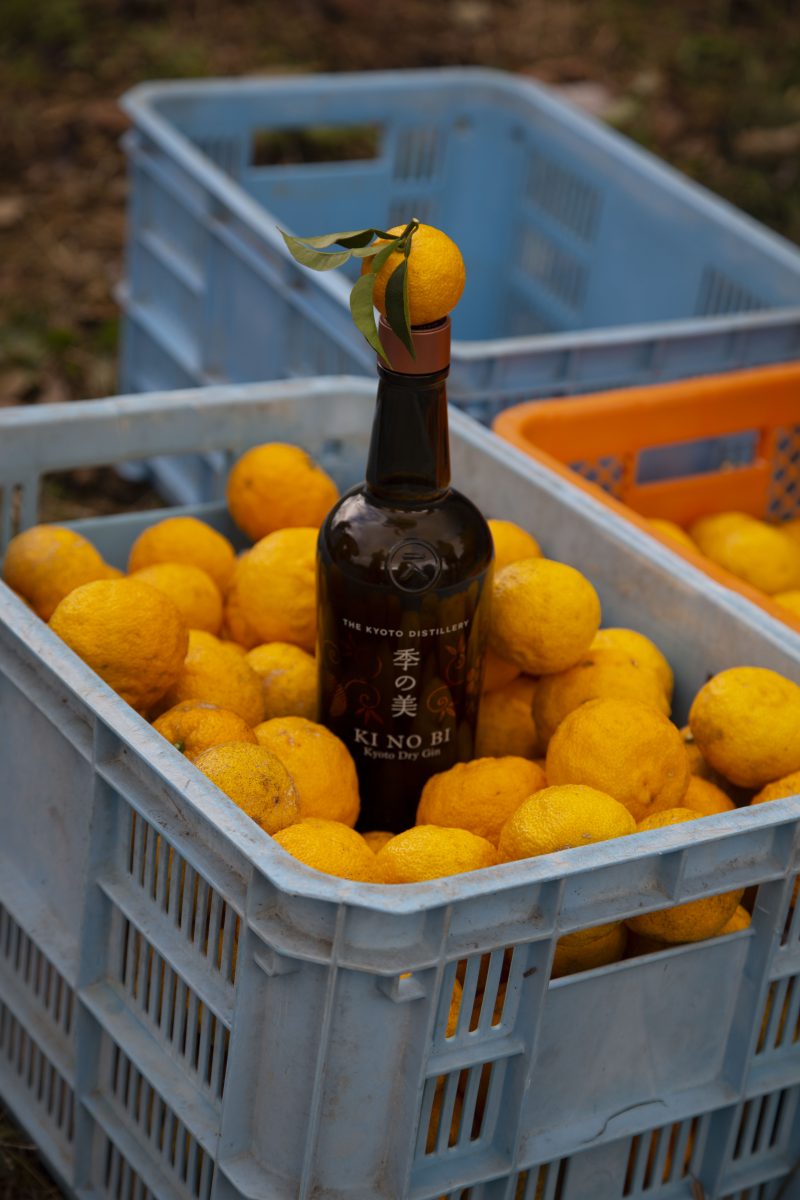 The distilling process concludes with the processed ingredients being returned to the orchards and fields in the form of mulch. The composted botanicals create a rich black soil which can again produce an abundant crop. Creating a sustainable cycle and eliminating waste, Kyoto Distillery also cultivates mutually beneficial relationships with local farmers.

Among the bartenders participating in the harvest, many ascribe to the school of classic cocktail craft that is popular in Japan today. Rather than following trends towards flashy drinks infused with molecular gastrological techniques, this classic approach develops skills in combining fresh ingredients with high quality spirits and liquors so that each flavor is heightened and refined. Gin, which has only recently become a standard liquor in Japanese bars, is still gaining momentum among bartenders who hope to create drinks that will appeal to a general public often unaccustomed to the botanical spirit. With this in mind, the Kyoto Distillery team worked with various bartenders in Japan and overseas to compile Classic KI NO BI Cocktails, a book of recipes spanning the gamut from introductory to involved preparations of gin-based refreshments (that was also produced by Kyoto Journal). 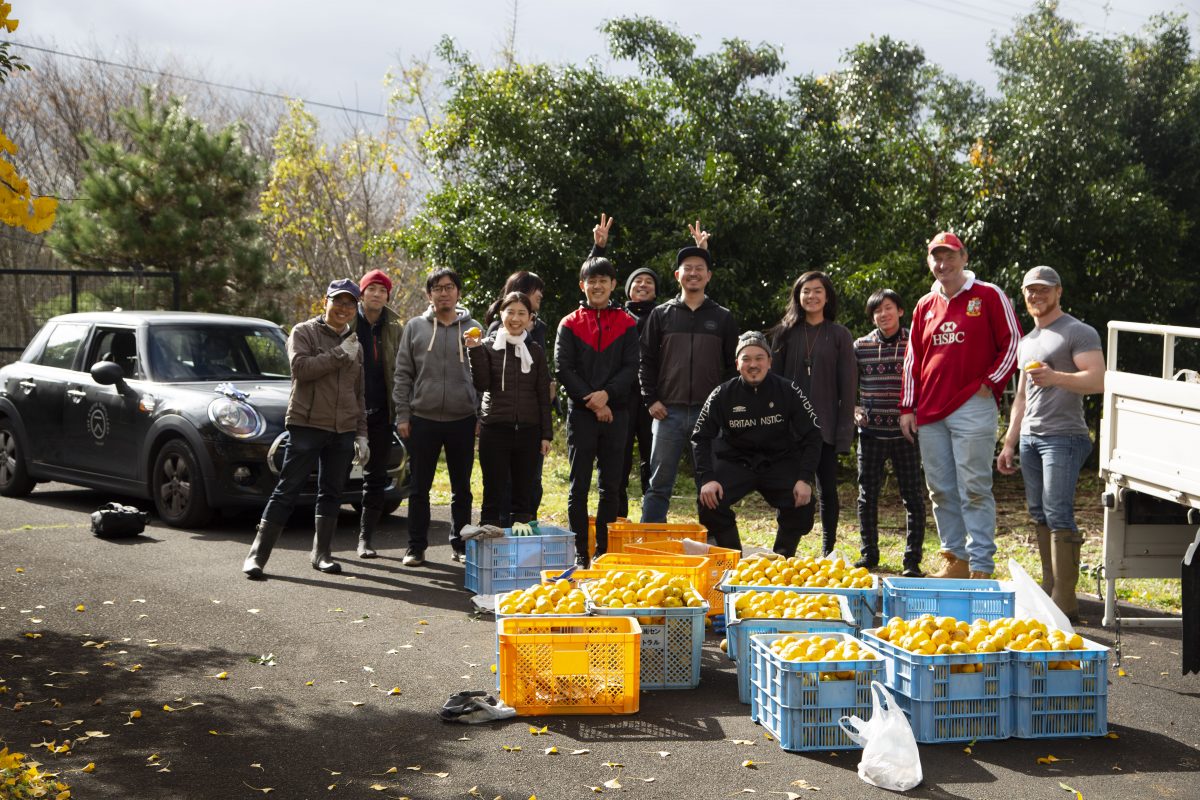 The number of local bartenders and food industry members who volunteered during the week-long yuzu harvest is evidence of the respect and popularity Kyoto Distillery has gained in such a short period of time. Along with a closer familiarity with the ingredients at the root of gin distillation, volunteers left with a bottle of KI NO BI gin in hand as a sign of thanks, feeling more connected to this growing, distinctly “Kyoto” community.

ORDER YOUR COPY OF THE CLASSIC KI NO BI COCKTAILS BOOK 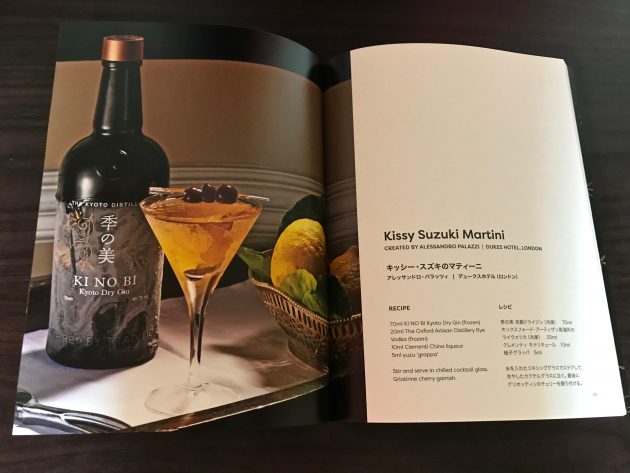 Ty is a editorial assistant at Kyoto Journal, having joined in January 2019.