KYOTOGRAPHIE was described recently by culturetrip.com as “The World’s Most Eclectic Photography Festival.” Its third edition, running from April 18 through May 10, 2015, features fourteen main exhibitions on the theme of “TRIBE,” spread across Kyoto in brilliantly-coordinated venues ranging from a sub-temple of the city’s first Zen monastery to traditional inner-city machiya with hidden moss-gardens to a temporary Shigeru Ban cardboard-columned pavilion in front of City Hall to “anti-fashionista” Rei Kawakubo’s local Comme Des Garcons concept store. A prolific series of related events provides opportunities to meet artists and curators through talks and dialog sessions, and even includes music. In addition, Kyotographie’s satellite event, KG+, fills up approximately fifty more venues throughout the city with a fascinating array of photographic visions.

The organizers of this immense enterprise, co-directors Lucille Reyboz and Nakanishi Yusuke (see KJ’s interview with Lucille and Yusuke HERE), this year chose the concept of TRIBE to underpin the festival with the perception that paradoxically, a new form of tribal thinking, based on sharing of identity, will and systems of value, may be what is needed now to subvert or transcend the currently dysfunctional identifiers of race and nationalism — “to see our place amidst the chaos of the era of information and help us acknowledge tribes of others” — and render war and discrimination irrelevant to the bigger picture of human existence in this era. They look to encourage the celebration of differences, and the unbound potential of creative imagination. 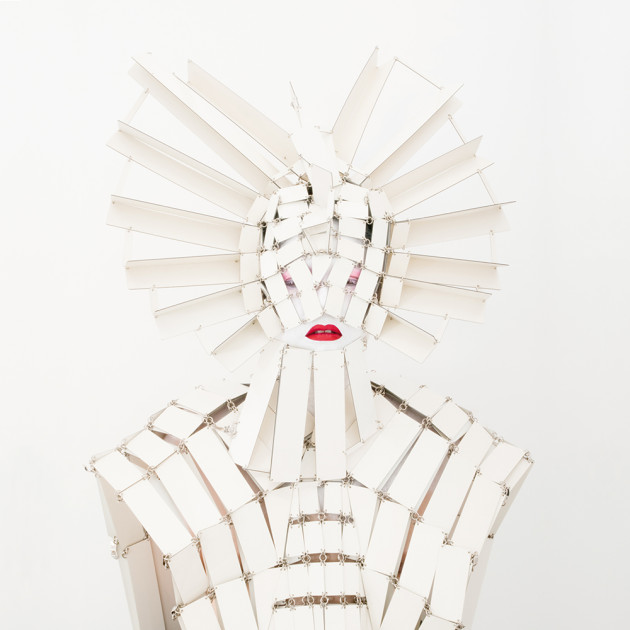 • Roger Ballen’s Shadowland 1969-2014, at the Horikawa Oike Gallery, his first show in Japan, an inspired South Africa-based 45-year retrospective (for a glimpse of his iconic black&white world, see his video “I Fink U Freeky,”which has scored over 63 million views on Youtube…) Also at Comme des Garcons. 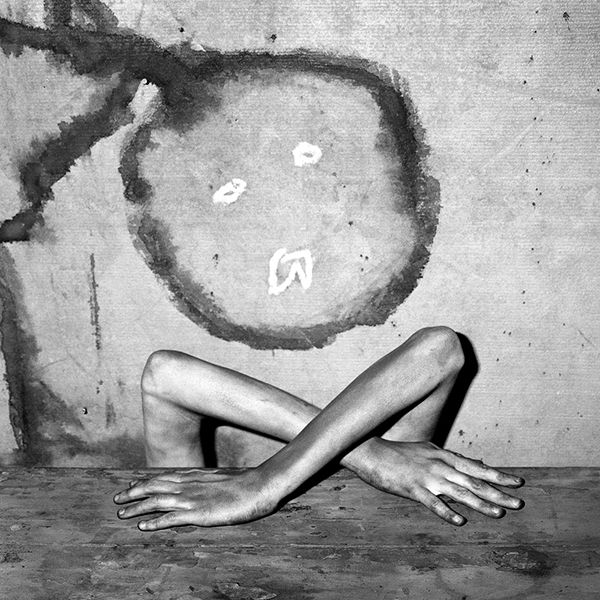 • Baudouin Mouanda, The Sapeurs of Bacongo (the all-male Society of Ambience Makers and Elegant People, strutting their sartorial splendor) — compellingly high-energy and superbly-composed yet somehow disconcerting full-color street photography out of central Africa, in a basement bar on Kiyamachi. 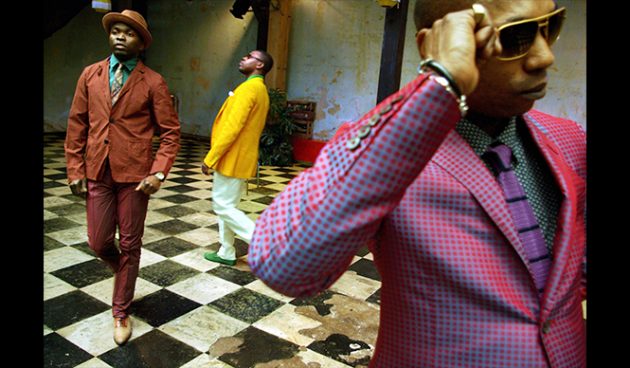 • Lucas Foglia, A Natural Order, documents the lives of people and communities living “off the grid” in the Appalachians — some longtime hippies from his parents’ generation, others new refugees from the recent U.S. recession, living much as the original pioneering settlers did, learning how to survive, dependent on the land. Showing in Yuuhisai Koudoukan, a superb oasis of Japanese sukiya (tea-house) style, the former residence of an influential Edo-period Confucian scholar, Minagawa Kien. 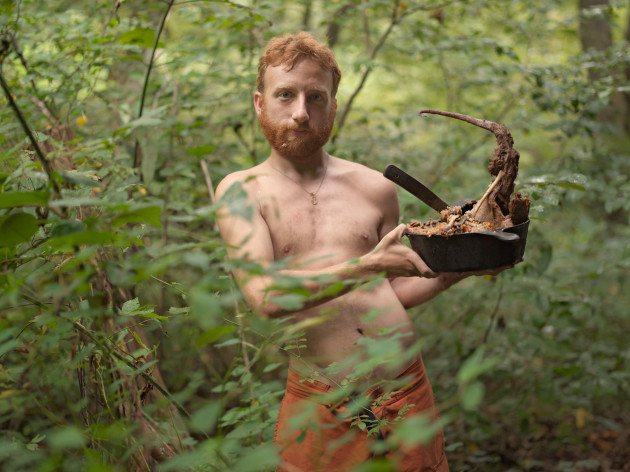 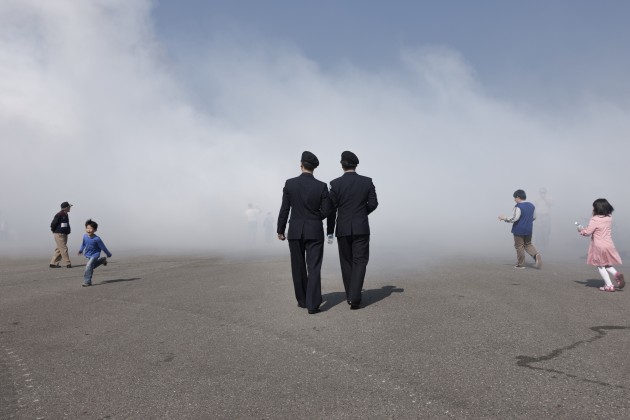 • Francis Wolff, A Vision of Jazz, at Shimadai Gallery, showing the classic images of Blue Note album covers that defined predominantly black modern jazz musicians as the essence of intellectual cool in the Selma–era U.S. The gallery features a cool and swinging Japanese garden, too. 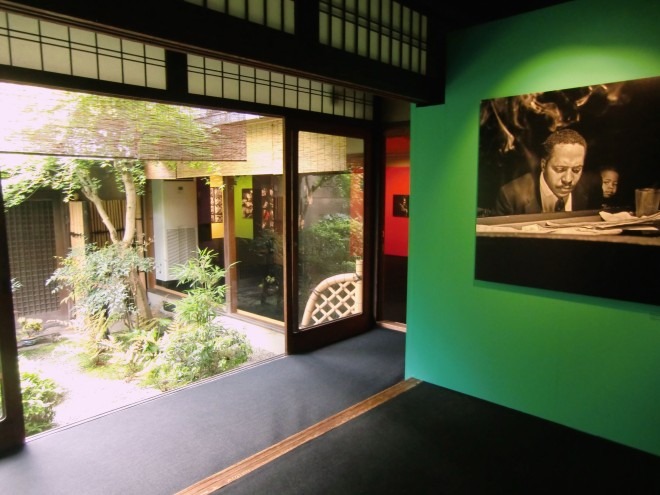 • The Guimet National Museum of Asian Arts, Last Samurais,First Photographs, at the Toraya Gallery, including images of the last shogun, Tokugawa Yoshinobu, revealing the disintegration of the “ancient” samurai ideal as Japan reinvented itself in the later 1800s. Toraya is a confectionery house that has operated out of the same premises since the 16th century… 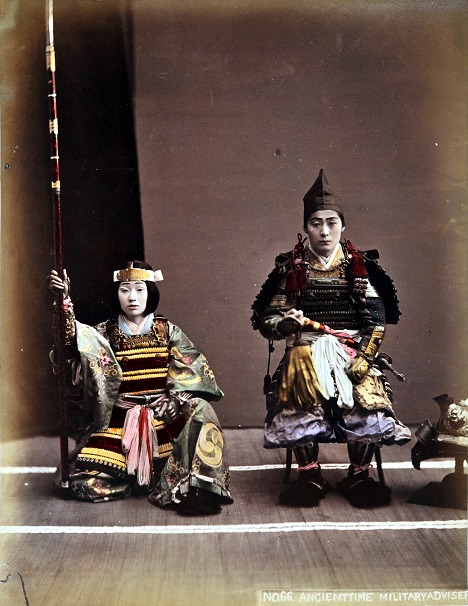 • Kimiko Yoshida, All That’s Not Me, extraordinarily-produced ethnographically-charged contemporary art images of a one-woman tribe, presented on traditional kakejiku hangings, byobu screens, and perspex in the Noguchi residence, a superb and long-established crafts house in Nishijin.

• Louis Jammes, Tchernobyl, at Sfera: multi-layered images from 1990-91, of people including children caught up in the horror of the world’s first major nuclear disaster —bringing new meaning to the photographic term “exposure.” A thought-provoking contrast to Kyoto/Milan-based Sfera’s “better lifestyle brand” housed in its distinctive Swedish-designed leaf-patterned perforated metal façade, on the edge of Gion’s antiques quarter. 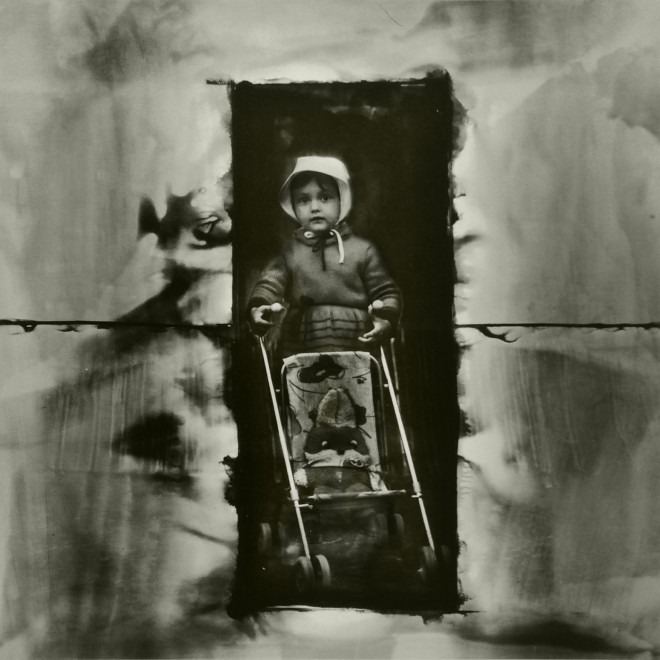 • Oliver Sieber, Imaginary Club, at the Asphodel building, documenting parallel-universe paradoxes of private identity and public individuality among club-goers in Europe and Japan, on three floors, the top room’s display reflected back in other-worldly photographic detail by a full-length mirror wall. 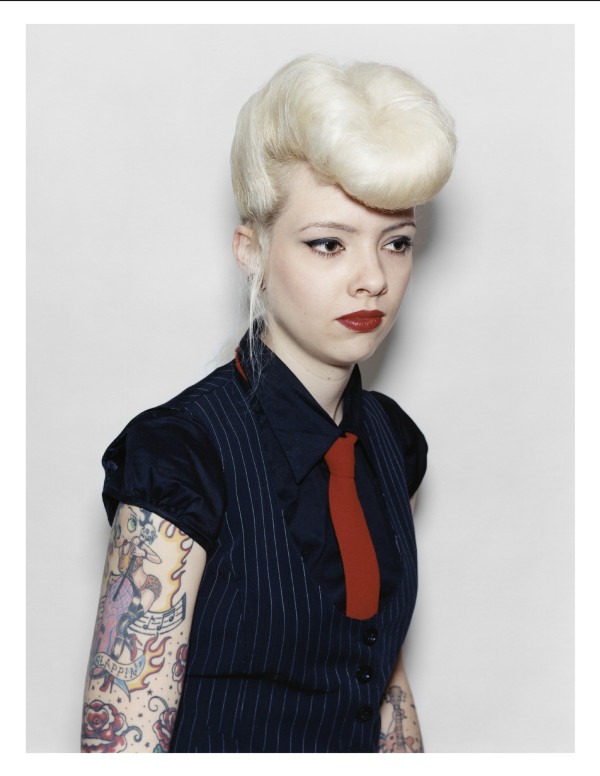 • Martin Gusinde, The Spirit of the Tierra del Fuego People, a haunting collection of photos taken between 1918 and 1924 of tribespeople and their rituals, by a German man trained as a priest, not a photographer, who far from attempting to convert his subjects, was transformed by his experience there, becoming a dedicated anthropologist — displayed in Shigeru Ban’s survival pavilion, a building style developed in response to the needs of post-disaster relief. 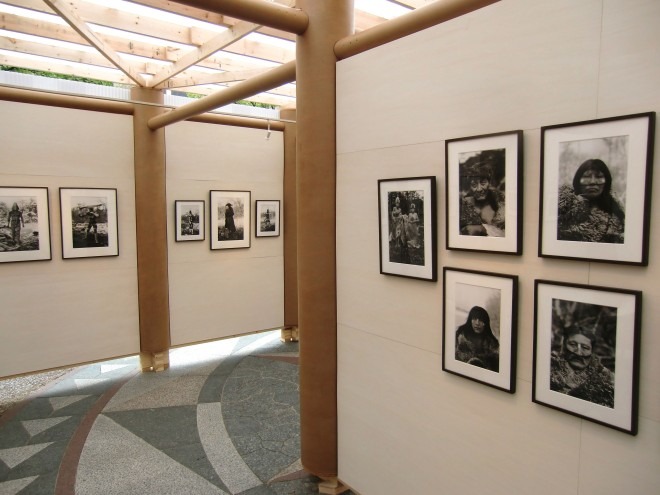 • Fosco Maraini “The Enchantment of the Women of the Sea” beside the stream of Gion Shinbashi: the ama divers of the islands off Noto Peninsula, photographed in 1954 using marvelous hand-built waterproof camera housings, shown upstairs in an old wooden house with an exquisite setting of fresh-scented split bamboo threaded wave-like through the rafters. 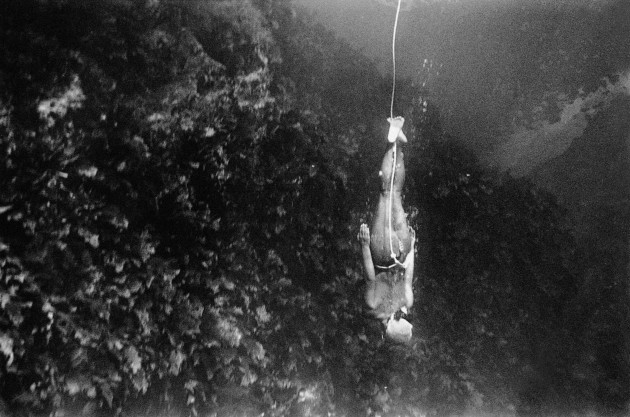 This energetic and dazzling new festival is a perfect illustration of the city of Kyoto’s “cultural crossroads” effect (which has also fueled KJ, for nearly 30 years). It provides wonderful opportunities to stroll the old and ever-new streets, enter fascinating buildings you might otherwise never have had access to, to see exceptional works in complex and rewarding interplay, and to appreciate Kyoto once again as a place that offers — and indeed demands — the highest levels of excellence. 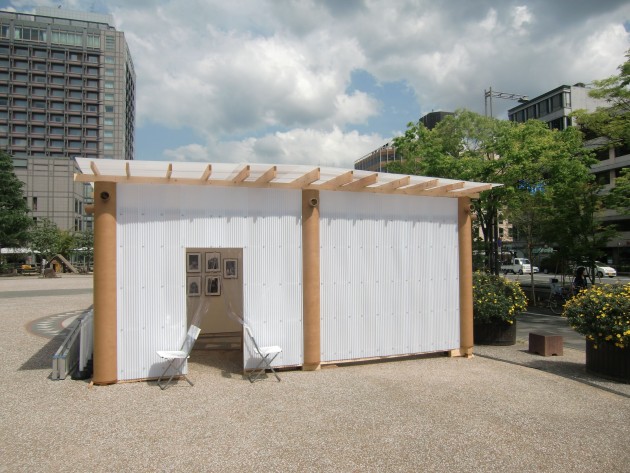 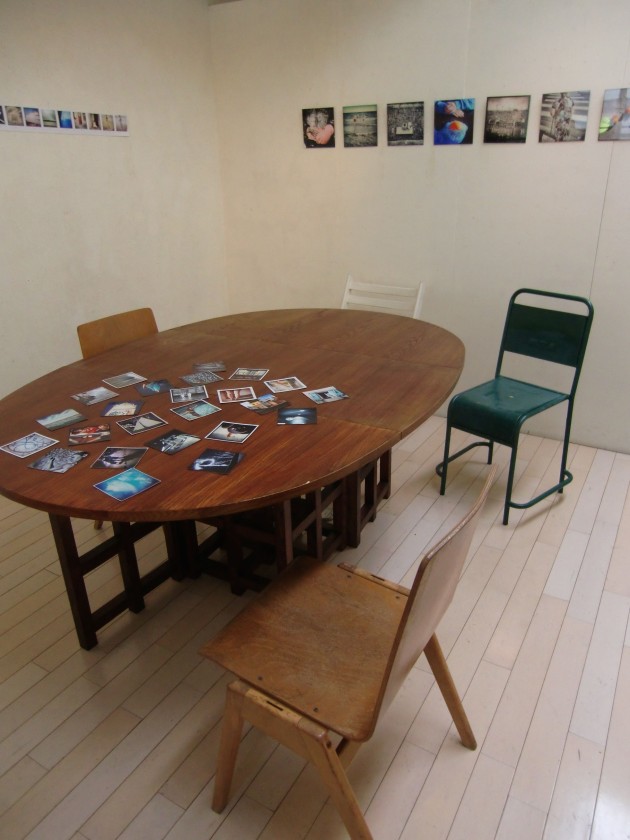 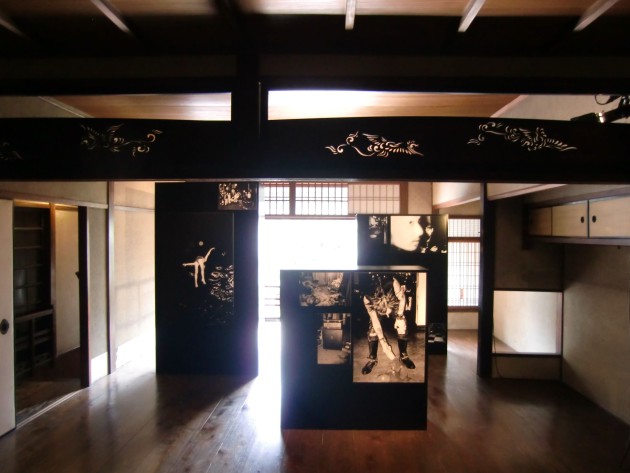 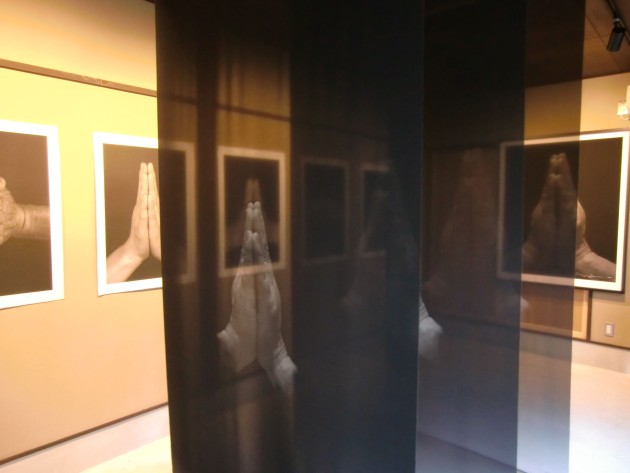 KG+ Yasu Suzuka at The Terminal 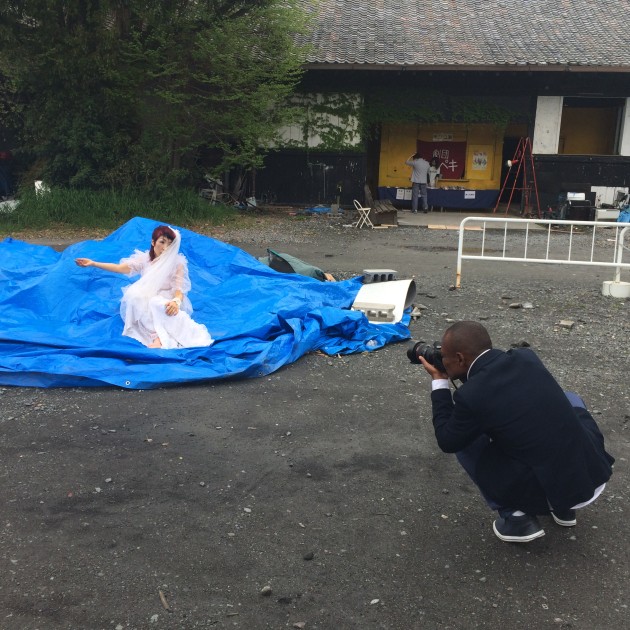 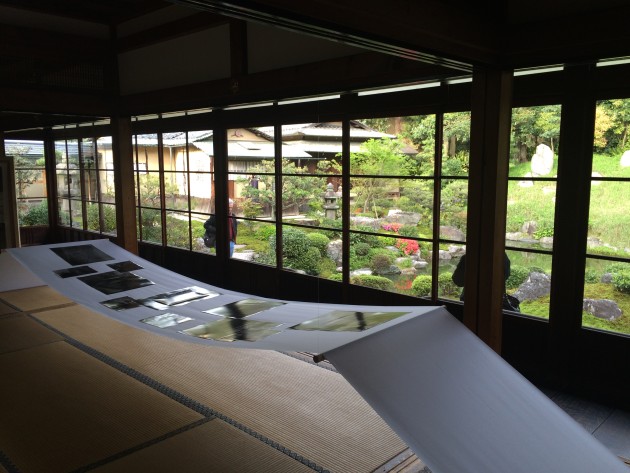 KG Passport, for entry to all main shows: 2,500 yen
Venue map
Special thanks to Kya Kim for extra photos