Mirka Rozmus is an Australian textile artist and master weaver whose first career was as a classical violinist. For 25 years she performed, toured and recorded professionally, enjoying success as a solo performer, as leader of the highly-recognized Elektra String Quartet, playing in the Australian Opera, and in film and television work, accompanying artists ranging from Barbra Streisand, Frank Sinatra and Liza Minnelli, to George Benson, John Denver, and Michael Hutchence.

Concurrently, Mirka developed a deep interest in complex traditional weaving techniques. In 1994 she opened her Design Studio in Sydney, and since 2002 she has devoted herself fulltime to creating superbly crafted original designs. Maintaining her musician’s passion for precision, discipline and beauty, her instrument of choice is now an eight-shaft, foot-powered hand loom. Utilizing long-established Western construction techniques, she specializes in Japanese hand-dyed Nishijin silk yarn, normally used to produce Kyoto’s finest kimono and obi — a lustrous traditional craft material she considers the best available.

As a virtuoso musician, the music that Mirka made transcended place and time, integrating past and present. Now, blending West and East in her meditative woven works, she aims to foster another kind of harmony — that of intercultural understanding and international awareness. Her work has been presented to royalty, and is represented in the collections of such prestigious museums as the Fashion Institute of Technology in New York, the National Gallery of Australia, the Victoria & Albert Museum, London and the Powerhouse Museum, Sydney. Mirka created a series of silk scarves entitled “Spirit of America” which were exhibited in the Powerhouse Museum in Sydney in 2008, one of which, “Equality,” will be presented to President Barack Obama. In 2009 she was commissioned by the Australian Government to create a special scarf for First Lady Michelle Obama as a companion piece. 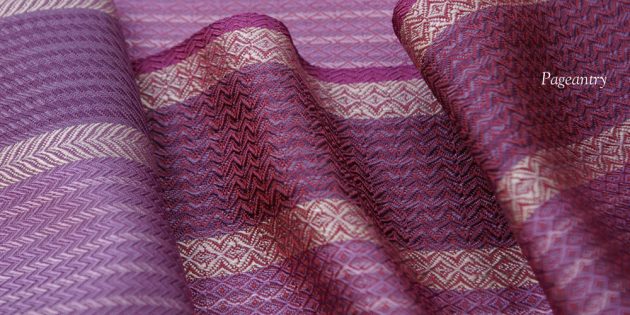 Rebecca Otowa: How did you begin to use silk?

Mirka: In Australia, in 1985, the stores from which one could purchase yarns did have a certain amount of silk. However, these shops were closing because very few people were still doing hand-weaving. The owner of one of these places in Melbourne asked me if I wanted to purchase all of her final job-lot of silks, including some very fine old Italian yarns. This is how I began to explore the realm of fine silk weaving. But the colors were very limited, and also the materials weren’t renewable, so I felt a great sense of frustration. Whilst on a trip to Japan to visit my sister and her husband in eastern Shiga Prefecture, I was expressing this frustration. I knew that their village had been a weaving village, or at least there were hand-weavers in the Japanese tradition who had lived there. So, my sister’s husband tried to find out if he could source some of the exquisite Nishijin traditional hand-dyed silk to me. His inquiries led to Mr. Komori, one of the curators at the Kawashima Textile Museum in Kyoto. They set up an appointment with all the requisite gifts and introductions and I took in some scarves I’d made from the Italian silk. Mr. Komori inspected these scarves at great length through his curator’s glass and finally he said he’d be willing to sell me the silk, but on the condition that it was to be used for my own personal work — I was not to sell the yarns. I was deeply honored. I think I purchased two or three kilos at that stage and took it home. Then, it sat in my cupboard for five years waiting for the time I would be able to take up courage and unwind these exquisite jewel-like skeins of yarn, because, as a Westerner, I had to invent and adapt my methods to accommodate these precious materials.

Can you elaborate on your interest in Japan from an aesthetic viewpoint?

I’ve always felt a great fascination with Japan. The incredible tradition of so many disciplines and so many art forms, from samurai sword-making to the exquisite textiles, the diversity, the complete aesthetic range, from earthiness to the purest delicacy in every art form — pottery, textiles, painting, literature. I feel that what personally resonates with me is the concept of mastery — the life-long discipline — in which one devotes oneself to study with a master, and to the purity of attaining the highest possible levels of one’s chosen art.

Your three watchwords are “precision, discipline and beauty.” What kind of precision and discipline is required in your work?

We probably don’t have time to elaborate on the incredible intricacies of the individual processes of the hand-weaving system. There are approx-imately fifteen to twenty separate processes between designing a piece and actualizing it as a scarf. Most people aren’t aware of the hidden processes. They look at someone weaving and see it as relaxing. The precision and discipline is an intrinsic part, right from the mathematical relationships of the textile which must be incorporated into the original design. The precision of threading each tiny eyelet in the loom in exactly the order chosen for the design continues right up to the final process of actually hand-finishing the scarves and twisting the fringes. Every single aspect is infinitely time consuming, repetitive and very tedious, involving 100% concentration, and therefore one must sustain an incredible level of discipline for weeks to actualize the design concept through to the finished pieces. Also, you have to be able to sustain repetitive movements until they become second nature. In music, they call it physical and muscular memory. Memorizing a concerto as a violinist, there’s a certain component of mental memory but most of the actual ability to memorize is a deeply ingrained physical memory, which comes only from repetition. I think it’s very similar in the weaving process.

I’ve noticed that the development and perfection of technique is of paramount importance in the actualization of artistic concepts. I’ve always been intrigued by the thought of mastery on every level — self-mastery, mastery of one’s emotions, mastery of one’s thought processes — mastery of one’s skills to use as a focus to purify oneself and to live well, to live happily, and to feel that one is living in a congruent and meaningful form. Discipline is very necessary to living in this way.

Your last watchword is “beauty.” What kind of role do these amazing colors play in your work?

The colors of the Nishijin silk are so awe-inspiring on every level. They are subtle and yet brilliant, and finely shaded in many gradations of color. I feel color is very healing and a very powerful conduit to human consciousness. I create with color in such a way as to inspire, elevate, heal and enrich, and these silks are a perfect vehicle for that. The incredible spectrum of these silk yarns is a constant source of inspiration to me. 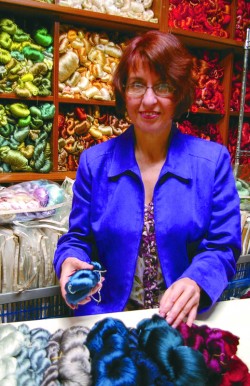 What’s your inspiration for the conceptual aspect of the scarves?

Each scarf is individually inspired. The eight-shaft loom that I use has been in use for hundreds of years, so the design possibilities are, in many ways, very limited. I like to think about how I can push or stretch classical Western textile structures. The resonance and power of traditional hand-weaving, and certainly of my work, comes from simple repetition in measured units.

There was one occasion where I participated in a breast cancer fund-raising event. I decided to design three scarves, symbolic of the process that a person with this disease would be going through. The first was entitled “Crusade” and had a blood-red theme in the weft. The second one, “Rainbow Warrior,” used 75 completely different colors, shaded in bands. On one side you’d see the colors and on the other you’d see the black and white of the warp that, to me, symbolized fighting the ‘Good Fight’ against cancer. And the third, “Poison,” utilized in-numerable subtle shadings blending from a sickly green through to a very powerful, potent green.

Very often in my travels, a place will inspire me to create a series using the colors of that place. I recently completed two such series. One was called “Spirit of Australia.” The subtitle was: “Terra Australis, Opal Series One.” I wove three scarves to capture the extraordinary vitality and rich ambience and diversity of the different opals — but also the earthy, direct and brilliant quality of the light in Australia. The other series is based around Kyoto, entitled “Miyabi Kyoto,” using the very beautiful ancient colors — the pea greens, soft mauves and oysters, deep purples and browns — evoking an ornamental spring garden glimpsed through fine latticework.

Where do you see this work going in the future?

The concept of textiles as treasure — this is what I seek to create, and this is a concept which resonates very strongly with Japanese culture. The unique aspect of my work incorporates not only the age-old traditions of Japan, in my use of their exquisite silk yarns, but also a new direction in using Western textile concepts in my own individual way as a contemporary artist. In the development of my international pro-file, I hope to build cultural bridges through the medium of my work, and to raise awareness of this fast-disappearing craft. If I can inspire a new generation of hand weavers to create their own textile treasures, I feel I will have accomplished my goal.