Bizen’s Past and Present at the Miho

With warm ochre blushes and the subtle textures of exposed clay, the ceramic style born out of Okayama prefecture’s Bizen is humble while retaining potential for visceral expression. The Fall show at the Miho Museum in Shiga prefecture, “Bizen: From Earth and Fire, Exquisite Forms,” running from September 14th through December 15th represents a rare occasion to view a diverse showing of Bizen ware representing ceramic work as it evolved from is cultural emergence in the Momoyama Period (1573-1615).

It is not without a certain amount of effort that visitors will arrive at the Miho Museum’s extensive collections of Japanese and Silk Road arts and artifacts. Leaving one of the several major cities in the area, visitors will pass through river valleys bordered by mountains sheathed in mist. Even from the comforts of the train or speeding along the modern Shin-Meishin Expressway, it is hard to avoid the impression that one is on a journey. It was with this sentiment that architect I. M. Pei labeled his designs for the museum “Shangri-La.” 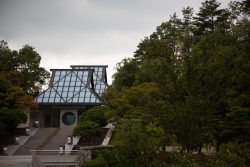 Approaching the exhibition space of the museum, visitors see the dual facades reminiscent of a Japanese farmhouse.

Upon ascending a winding road from the valley below, visitors pass through the mountain itself via a gently arching tunnel and cross a bridge to arrive at the museum’s front door. Pei, who passed away on the 16th of May this year, said that the structures were designed to be “comfortable in the natural landscape.” The majority of the exhibition spaces are underground, literally built into the mountaintop. The Miho, completed in 1997, is perhaps Pei’s most notable work in Japan. 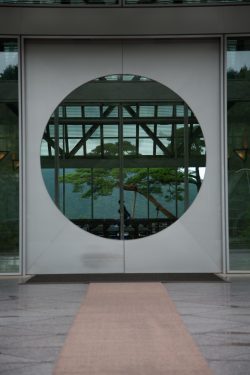 The front doors offer a captured landscape view of a pine tree and the surrounding mountains.

The Bizen exhibit is the result of the positive reaction to a 2014 exhibition on Celadon pottery held at the Craft Gallery of the National Museum of Modern Art, Tokyo. Respondents to curator Karasawa Masahiro’s survey asked for more exhibitions which covered not only a specific genre of pottery but also highlighted historical context and the development of style over time. This Bizen exhibition represents the second chapter in a shift of curatorial approach to a Japanese ceramic work.

The oldest of the exhibited pieces dated to are large storage jars, mortar bowls, and other functional ware which would service a broad population. Bizen ware, like many other Japanese ceramic work, underwent dramatic changes in style and function particularly as a result of patronage from tea ceremony institutions. In the Momoyama period, masters in tea ceremony began to commission Bizen potters spurring the development of variations of flower vases and water jars which would become emblematic of Bizen style. 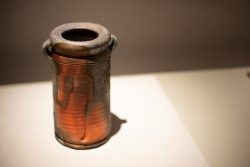 For those unfamiliar with Japanese ceramics, Bizen ware represents one of the great refinements of technique and style which has nothing to do with applied glaze. Far from the uniform flat tones you might find on your coffee mug, these ceramic works gain color and texture from the elements held within the clay and the firing of the wood kilns. One particularity of Bizen-yaki is that the clay is often dug out from beneath local rice paddies along with all the surrounding organic materials. As temperatures reach as high as 1350 degrees Celsius small particles in the wood fuel begin to melt and form a natural glaze on the pots. Chemical elements in the clay, particularly iron, also bring a variety of colors to the surface. 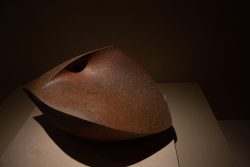 One feature of the Miho’s exhibition is the imitative practice that forms a thread of aesthetic lineage through generations of Bizen potters. The form of the mortar bowl, which has been a constant in Bizen back to the Kamakura period (1185 – 1333), can be sensed within a new bowl made by Mori Togaku, a well-known living potter. Mori is known for his own innovative forms but he is also dedicated to researching and preserving techniques which extend back into Bizen’s past. He has built several massive kilns which demonstrate some of the effects potters might have expected when the Japanese ceramic trade necessitated such dramatic scale. 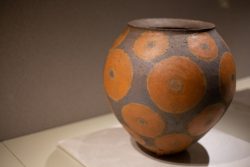 Beyond the functional forms of the tea ceremony, Bizen potters have recently been greatly influenced by the sculptural work of Kakurezaki Ryoichi. A native of Goto Island in Nagasaki Prefecture, Kakurezaki trained as a designed and then moved to Bizen to study under several established Bizen potters. After starting his own kiln, he developed a unique style outside of the local mainstream while still using Bizen firing techniques. His genius sculptural forms have opened the door for many young Bizen artists to work outside of conventional forms and develop new ways to highlight the beauty of local clays and techniques.

The Miho exhibition traces an excellent path between displaying modern and ancient masterworks and highlighting the techniques and aesthetics that define artistic work in Bizen.

Ty is a writer and editor concentrating on stories which concern the “Next Generations” of craft and culture in Japan.