On January 23rd, 2012, we entered the Year of the Yang (陽, pinyin: yáng, lit. “sun”; male element Yang) Water Dragon, which appears in a 62 year cycle. It is a year I have been awaiting for a long time. Its symbolism is closely related to East Asian calligraphy, and it also gives me the opportunity to explain my pen name.

Dragons in Far Eastern mythology are benevolent creatures; bearers of wisdom, power, and positive energy. Together with a phoenix, dragon’s Yin (陰, pinyin: yīn, lit. “shadow”; female element Yin) counterpart, they are seen as an auspicious omen. Dragons and their supernatural abilities often appeared in the history of Chinese calligraphy. There were many references made to certain calligraphers or their styles, connecting them to dragons (such as Wang Xizhi (王羲之, Wáng Xīzhī, 303–361) of the Jin Dynasty (晉朝, 265 – 420); more about it in this article). 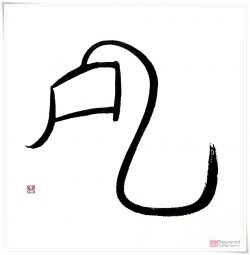 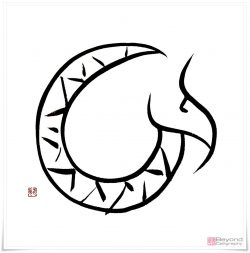 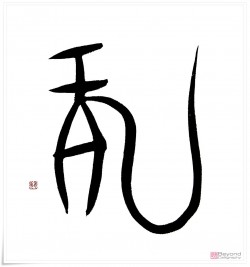 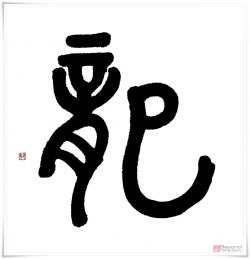 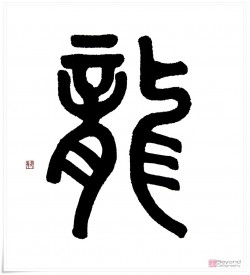 Over the gateway to the Chinese city of Lin’an (临安市; pinyin: Lín’ān Shì), it is said that there was a large sign that read “Conquest of the Southeast Country”, written by master calligrapher Tu Zhuo (屠倬, pinyin: Tú Zhuō, 1781-1828). The passing of time caused a part of the second out of four characters to fade, and it was in need of a touch up. Since Tu Zhuo could not be located, his student undertook the task. Officials of the county were more than satisfied with the final result. Sometime later, Wang Wenzhi, a senior court officer, was passing the gate and stopped to read the sign. These are his famous words:

The dead snake referred to the corrected character.

The moves of a Master calligrapher resemble those of a dragon in flight. The calligraphy is so alive and vigorous that it seems to contain a dragon’s spirit flowing in the brush strokes, as if the traces of ink were lit on the fire of motion, eluding us with its three dimensional reality, reaching our soul with its spiritual arms. 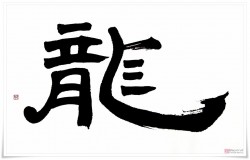 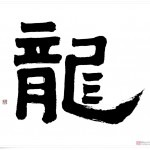 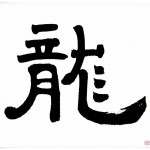 Calligraphy is the art of meditation. Devoting one’s entire life to one art wholeheartedly purifies the mind and blesses that person with a mythical aura of wisdom. The personality of the old masters I have met is defined by their calligraphy. It is so simple, yet so deep, so sensible and untouchable. For me they are the reincarnations of ancient dragons. They float above everyday desires, like clouds above over-heated summer ground, close enough to maintain eye contact, yet far enough away to hear nothing but the songs of void skies. Watching them write makes me wonder whether or not they really need a brush to write at all. They have become the art itself. 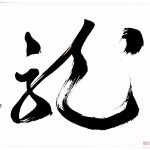 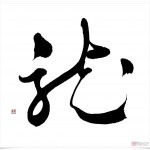 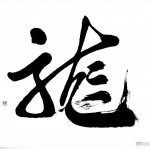 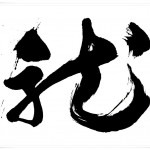 Many people ask me why I chose the pen name 龍涙 (りゅうるい, ryūrui, “Tears of the Dragon”). I believe that the following passage from my book (quoted above) should explain it very well:

“The dragon is the guardian of my soul, watcher of my ancient spirit. Its endless wisdom opens up many new paths in my life and lifts them up like a magical torch, leading me to a state of internal peace and spiritual tranquility, a place in time where surroundings and reality are not relevant but cease to exist, allowing me to submerge myself in ever-lasting legend.” 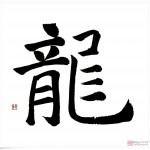 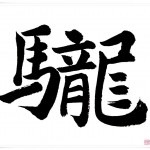 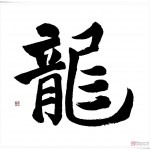 “Tears symbolise passion and a profound understanding of Sho (書, しょ, lit. “to write”; here: East Asian calligraphy), aesthetics through senses, curiosity, and the essence of the primordial values of the Universe. The shiny ink is the very tears being poured like waves of energy, raw feelings from the bottom of my soul barreling on wings of detached mind like a wild dragon, pure as a child’s dream. It is an echo of sudden eruption a thousand years old, an elusive form of appreciation of what is not changeable by human will, thrown subconsciously and with sacred appreciation onto paper, in a blink of time.”

“Tears of the dragon” become the ink of the soul. Ink is a Yang element of calligraphy, being soft, supple and warm, and it contrasts with the Yin element, paper. Together they bring harmony. Since the ink is a fluid, and to make it one requires water, it is strongly connected to the water element in the Chinese theory of the Five Elements (五行, pinyin: Wǔ Xíng). These are: Wood (木, pinyin: mù), Fire (火, pinyin: huǒ), Earth (土, pinyin: tǔ), Metal (金, pinyin: jīn), and Water (水, pinyin: shuǐ). To read more about the interactions between those elements, please see my article here. 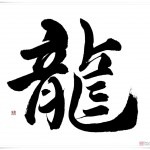 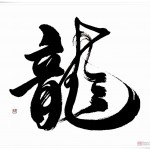 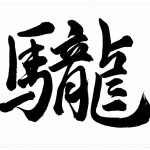 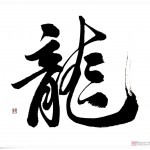 For calligraphers, this year is very special. The Water Dragon’s spirit lives in the ink. Its wisdom is its deep colour, its spirit is the flowing energy (行気, pinyin: xín qì, lit. “moving spirit”), its power and momentum is the kasure (掠れ,かすれ, i.e. “streaks of white paper piercing through the ink strokes”), and its immortality is the fact that calligraphy, be it on paper or in the hearts of people, lives on, remaining as mythical as the dragons, revealing its most cherished secrets only to those who live by it. Some people do not believe in the existence of dragons. I have heard that dragons mourn the existence of such people.

On the day of the 31st of December, I wrote the calligraphy of the character for dragon (龍, pinyin: lóng) in five major calligraphy scripts. I treated oracle bone script (甲骨文, こうこつぶん, kōkotsubun) separately, although, in a broad sense, it is a part of the Seal Script family. Each of the scripts has its separate video (the first movie above combines both oracle bone script and small seal script examples). I hope that you will enjoy watching them as much as I enjoyed writing the character.