The Tale of Genji, the world’s first great novel, was written in the early eleventh century by Murasaki Shikibu, a lady-in-waiting in the imperial court in Kyoto. The original text of the tale is now extremely difficult to read, but it has been translated many times into modern Japanese, as well as into various foreign languages, and the work has retained remarkable popularity. Time magazine in late 2001 commented on the current “Genji boom,” citing the release of a major new movie version in Japan, with a former Takarazuka actress performing the role of the Shining Prince.

After eight years of work, Royall Tyler recently published a new, complete English translation (The Tale of Genji [2 vols.], New York: Viking, 2001). He wrote the following essay for this issue of Kyoto Journal. 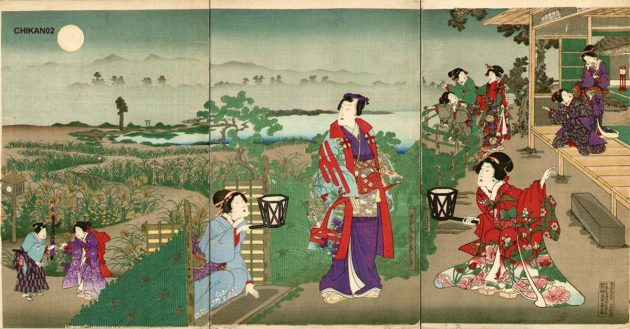 Transience is a theme often associated with The Tale of Genji, thanks especially to Motoori Norinaga’s (1730-1801) famous insistence that the great motif of the tale is mono no aware (“the pathos of things”).  There is much to be said for this view, especially since it encourages a reading sensitive to intimate human experience and intentionally shuns the sort of moralistic approach that was well established by Norinaga’s time and which flourishes even today.  Still, the notion of mono no aware remains largely Norinaga’s invention.  The expression does not occur in the tale; nor does the tale’s author, Murasaki Shikibu, clearly flag the idea as a guiding principle for her work.  So what does the book itself suggest about sensitivity to the fleeting nature of human existence?

Murasaki Shikibu comes closest to evoking Norinaga’s notion of mono no aware in chapter 25 (Hotaru, “The Fireflies”).  The speech belongs ostensibly to her hero, Genji, but readers have long heard her voice through his.  A young woman of great interest to Genji, one known to readers as Tamakazura, is whiling away the boredom of the rainy season by reading and copying tales (monogatari, “fiction”).  One day, finding her enthralled by works like these, which lay scattered about everywhere, Genji exclaimed, “Oh no, this will never do!  Women are obviously born to be duped without a murmur of protest.  There is hardly a word of truth in all this, as you know perfectly well, but there you are caught up in fables, taking them quite seriously and writing away without a thought for your tangled hair in this stiflingly warm rain!”  He laughed but then went on, “Without stories like these about the old days, though, how would we ever pass the time when there is nothing else to do?  Besides, among these lies there certainly are some plausibly touching scenes, convincingly told; and, yes, we know they are fictions, but even so, we are moved and half drawn for no real reason to the pretty, suffering heroine.  We may disbelieve the blatantly impossible but still be amazed by magnificently contrived wonders, and although these pall on quiet, second hearing, some remain fascinating…

“[Tales] record what has gone on ever since the Age of the Gods.  The Chronicles of Japan and so on give only a part of the story.  It is tales that contain the truly rewarding particulars!”  He laughed.  “Not that tales accurately describe any particular person; rather, the telling begins when all those things the teller longs to have pass on to future generations—whatever there is about the way people live their lives, for better or worse, that is a sight to see or a wonder to hear—overflow the teller’s heart.”

(This passage, like the others below, is from my translation of The Tale of Genji, New York: Viking, 2001.)  Here, Murasaki Shikibu makes clear not only her own sensitivity to the fleeting character of existence but her resolve as a writer to preserve for all time something of what she herself has seen, heard, and felt.

As the great French novelist Céline wrote in Voyage au bout de nuit (“Journey to the End of Night”), “All of us, in our own way, lament the passage of time.”  Murasaki Shikibu’s way of lamenting it seems to have been writing her tale.  Céline also echoed Genji’s contention that tales convey a valuable truth.  “[Tales],” Genji declared, “record what has gone on ever since the Age of the Gods.  The Chronicles of Japan and so on give only a part of the story.  It is tales that contain the truly rewarding particulars!”  The Chronicles of Japan (Nihon shoki, 720 A.D.) are a formal history of Japan, written in Chinese.  Such a work indeed tells only a part of the story, because it is tales—fiction—that convey the secret movements and motives of the heart.  As Céline wrote, “Yes, everything of genuine interest goes on in the shadows.  One knows nothing of the true history of men.”  Murasaki Shikibu, who seems to have known not only The Chronicles of Japan but also The Records of the Historian (Shiji, the great history of China completed by Sima Qian in 91 B.C.), may have meant her evocation of what “goes on in the shadows” to point to the realities of “true history.”

In Japan, a famous emblem of transience is the falling cherry petal, of which The Tale of Genji has its share.  A poignant instance occurs in chapter 41 (Maboroshi, “The Seer”).  Murasaki, Genji’s great love and the tale’s single most important heroine, has died recently after leaving her house to a little boy: her adoptive grandson, later known to readers as Niou.  Beside the house, a beautiful cherry tree is now in bloom.  “There are flowers on my cherry tree!” the little boy exclaims proudly.  “I will not let them fall, ever!  We must put up a curtain all round them—that way the wind will not get at them!”  He, too, knows in his childish way that cherry blossoms cannot last.  The reader thinks of Murasaki, who is gone, and of Genji himself, who after this chapter will never be seen again.

The other great emblem of transience, one even more common than cherry petals, is the drop of dew.  It lives nowhere more fully in Japanese literature than in chapter 40 (Minori, “The Law”), which narrates Murasaki’s death.

At dusk a dreary wind had just begun to blow, and Murasaki was leaning on an armrest looking out into the garden, when Genji came in.  “You managed to stay up very nicely today!” he said.  “Her Majesty’s visit seems to have done you so much good!”

With a pang she saw how happy her little reprieve had made him, and she grieved to imagine him soon in despair.

“Alas, not for long will you see what you do now: any breath of wind

may spill from a hagi frond the last trembling drop of dew.”

Dewy hagi fronds tossing in the wind figure prominently in the Genji monogatari emaki (mid-12th c.) illustration of this scene.  Inside the house, Genji contemplates Murasaki’s recumbent figure; and one also glimpses, behind a curtain, the empress, who has also come to be with Murasaki.  The narrative continues:

It was true, her image fitted all too well: no dew could linger on such tossing fronds.  The thought was unbearable.  He answered while he gazed out into the garden,

“When all life is dew and at any touch may go, one drop then the next,

how I pray that you and I may leave nearly together!”

He wiped the tears from his eyes.

“In this fleeting world where no dewdrop can linger in the autumn wind,

why imagine us to be unlike the bending grasses?”

One hears in the distances of memory the words of Brahms’ A German Requiem; Den alles fleisches is wie gras (“Then all things of the flesh are as grass”).

They made a perfect picture as they talked, one well worth seeing, but the moment could not last, as Genji well knew, although he wished that it might endure a thousand years.  He mourned that nothing could detain someone destined to go.

“Please leave me,” she said.  “I feel very, very ill.  Oh, forgive me for being so rude, however reduced I may be!”  She drew her standing curtain closer and lay down, obviously in greater danger than ever before.

“What is the matter?”  Her Majesty took her hand and watched her, weeping.  She really did look like a dewdrop that would vanish soon.  Countless messengers clattered off to order more scripture readings.  She had been like this before and still revived, and Genji, who suspected a spirit, spent the night ordering every measure against it; but in vain.  She died with the coming of day.

So the dewdrop spills from the leaf.

But remember too, when reading the tale, the next words in A German Requiem : und alle herrlichkeit des menschens ist wie grasses blumen (“and all man’s glory is like the grass’s flower”).  Glory is Genji’s province, not Murasaki’s, and the scattering of his glory like blossoms on the wind is all but accomplished when Murasaki dies.  The process has taken more than ten years.  Dewdrops and flying petals or leaves may be familiar from countless short poems that lament transience in their own way, but that does not mean that so vast a tale evokes transience only in small, telling images.  The whole middle section of the book, starting with chapter 34 (Wakana 1, “Spring Shoots, Part One”) is a prolonged, tragic demonstration that all beauty and glory pass.

In chapter 34, Genji, who already has everything, reaches for the last, vain ornament to his glory: Retired Emperor Suzaku’s favorite daughter, the Third Princess (Onna Sannomiya).  In accepting to marry her he commits a fatal error that will play itself out over hundreds of pages, during which Murasaki falls ill; Kashiwagi dies after violating the Third Princess; the Third Princess becomes a nun (thus proclaiming Genji’s failure to all); and, finally, death claims Murasaki herself, thus leaving Genji no more than the empty shell of what he used to be.  Then Genji himself disappears at the age of about 53 or 54.  This is transience on a grand scale indeed—one worthy of the greatest Greek tragedy, however little it may resemble such tragedy in form.  Chapter 52 (Niou Miya, “The Fragrant Prince”) begins, “Now that his light was gone, none among his many descendants could compare to what he had been.”  Transience in The Tale of Genji is no haiku leaf or petal, no fleeting tear.  It is the passing of a great man and his world.

This article was published in Issue KJ50: Transience.