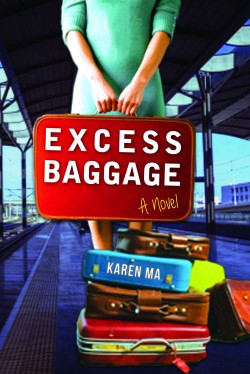 When Pei arrived at Tombo late in the afternoon the following day, Mr. Ogawa was already waiting. He was eager to show her to the kitchen hidden behind the high counter. Although small, the kitchen was neat and well organized. At one end there was a stove. Nearby, on a low end table, a dozen pots and pans were stacked up in three piles. In the middle and right behind the counter laid a long chopping board for cutting vegetables and meat.

Directly behind the counter against a wall was a cupboard filled with dishes and plates in every shape and size imaginable— square dishes, round dishes, rectangular ones, and even fan-shaped ones, in hues of blue, white, brown, and light green. In the rear of the kitchen, a small washroom held two sinks and a couple of towel racks. This, Pei soon discovered, was where she’d be spending most of her time, washing and cleaning dishes.

After showing Pei the kitchen, Mr. Ogawa handed her a Japanese-style wrap-around apron and set her to work. Her first assignment was to help Mr. Hayashi, the chef, cut up two large bowls of white radishes. Mr. Hayashi, who looked to be in his mid-fifties, told Pei that the white daikon radish was an essential garnish for a variety of Japanese dishes.

Plump and light-hearted, the round-faced chef appeared to approach his work with a sense of joy. While cooking, he was always humming old Japanese love songs and making jokes, even though Pei couldn’t understand most of the lyrics. He was kind to her, taking time to show her how to do her job properly.

“Wait, Cho-san,” he said, addressing Pei as Miss Cho—Cho being the Japanese reading of her surname, Zhang—“you cut the radish like this to make the slices thinner,” he told her. “There, don’t they look much better that way, like the waves of the sea?”

After the radishes, Mr. Hayashi gave Pei some cucumber and carrots to cut. With the help of a vegetable cutter, which looked very much like a cookie cutter, Pei was instructed to turn the carrots into shapes of maple leaves and plum blossoms. She’d never seen vegetables cut in such delicate, dainty shapes. In China, carrots were usually sculpted into shapes of exotic birds or trees. Small, think small. Japanese have a love for things miniature; Pei suddenly remembered this tidbit she’d read somewhere about the Japanese culture. So that’s what they were talking about!

Things got more hectic toward evening, and Pei was kept so busy washing dishes in the back that she didn’t even have time to go to the toilet. By the end of the night, she felt as though she’d learned a great deal about the Japanese food culture. Mr. Hayashi even taught her that there was a front view for every type of container served. For a half-moon plate, for example, the straight side was the front. All in all, it wasn’t a bad start for a first day. Or so she thought.
“One second, Cho-san!”

Just as Pei was about to leave Tombo, having already changed into her street clothes and punched her time card, Mr. Ogawa came rushing from behind the cash register where he’d been sitting.

“I saw you signing out after you’d changed into your street clothes. That’s company time, even if it’s just a couple of minutes.” Mr. Ogawa blocked her way with his folded arms, an irritated look on his face. “I don’t know what you do in your country, but here in Japan you always change clothes on your own time. Is that clear?”

“It’s her first day, Ogawa-san. I’m sure she didn’t mean any harm,” Mr. Hayashi said from the back kitchen, popping his head out.

“This doesn’t concern you, Hayashi-kun. Go back to work.” Mr. Ogawa waved the chef back into the kitchen before turning back to Pei. “Another thing: I noticed you came in ten minutes late today. In Japan, when you work for someone, you must arrive at least five minutes before work is to begin. Otherwise, you’ll inconvenience others and make a nuisance of yourself. This is something you must avoid at all costs. Do you understand?”

“Uh … hai.” Pei nodded. She felt her cheeks burning. She wanted to defend herself, but her imperfect Japanese failed her. She stood frozen by the restaurant door, as if waiting for permission to be dismissed.

“Take these rules to heart. Now that you’re in Japan, you must do what the Japanese do. Otherwise, it would be meaningless for you to have come here.”

“Hai, I understand!” Pei made a quick half bow and dashed out of the restaurant, her heart still pounding when she was out on the street.

On the train home, the restaurant scene replayed itself in her head over and over again. She wasn’t used to being chided at work, especially over something that seemed so trivial. The more Pei thought about it, the angrier she became. In China, if she were ten, fifteen minutes late to work, nobody would bat an eye. And what was the fuss about changing into the uniform before punching in the time card? Why begrudge the two minutes it took to change one’s clothes? How petty and small-minded! Pei had never liked her prickly former boss, Lao Wang, at the Number One Department Store. But compared to Mr. Ogawa, he seemed positively noble and generous.”

This is an excerpt. Karen Ma’s novel Excess Baggage is available from Amazon in Kindle and print formats.