David Jenkins, a longterm resident of Kyoto, translated medieval Japanese poetry (with his co-translator, Yasuhiko Moriguchi) — and made it timeless. He passed away on April 10th, 2000, surrounded by fully-blooming sakura; is still missed by friends and colleagues here at KJ. 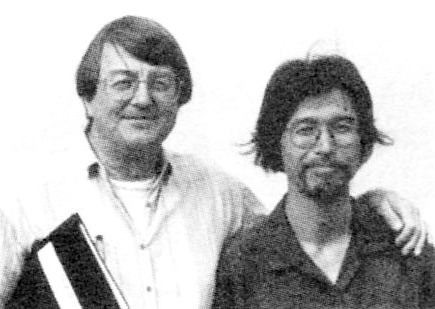 This poem is by Gregory Dunne, KJ Associate Poetry Editor:

For David Jenkins in memoriam
& for Mary & Shinko

In Noh drama the actor indicates a journey, even a lengthy
journey, by standing in one spot and turning himself in a
full circle. Thus we see in this simplest of gestures, that points
of departure and of arrival are one and the same.

– David Jenkins,
From The Gates of Night, Six Songs from the NOH

Taking Emi to school and glad –
The privilege you said it would be,
You who cherished walking
Mary to school each day.
Easy to remember the two of you
Walking passed the house –
Mornings you splashed through puddles
And spoke the words
She loved to say:
Galoshes, pinhead & nincompoop.

You were forty-seven
When fatherhood arrived –
The best thing
In all the world to happen.
I was thirty-seven
Scared and far from sure
When you talked to me
Late into a night
In spring ¬– made me
See the singular beauty of its joy.

Mary didn’t look at us.
She stood and left the café – left
As soon as she heard
We planned to use
The recording of you
Reading your translations.

She slipped away in school uniform
With her book of manga
Pressed to her chest –
She went outside and sat
On a broken stool and leaned
Her head against the glass.

You would have enjoyed
Seeing the way the book
Brought her a smile –
The way her breath
Fogged the window
Into the shape of a dancer.

Of her book and blossoms.

Translating in collaboration with Yasuhiko Moriguchi since 1981 (and with sumi-e artist Michael Hofmann), David Jenkins contributed greatly to Kyoto Journal with classic selections of poems from the Ryojin-Hisho in KJ 12, the Kanginshu in KJ 12 (review below), the Hojoki in KJ 30 (after the Kobe earthquake) — all from fine books published separately — and Noh songs in our Word bookzine (29). (The poem beginning “How pure the coming paradise,” featured as the cover of KJ 12).

“The Kaiser’s Navy” appeared in KJ 44. David is also remembered for his readings at the Kyoto Connection and elsewhere in Kyoto (often in collaboration with musician Preston Houser), where medieval classics (and classical shakuhachi) became absolutely contemporary, and then timeless. Kyoto was, and remains, a richer place for David’s presence here.

David also collaborated with sumie artist Michael Hofman, whose images drawn from the Hojoki and Kanginshu graced publications and exhibitions, particularly one memorable show with “Why not just get crazy?” performance at Hakuso-sonso garden, recorded in their video “Simmering Away.”