A selection from thirty-three ostrich cadenzas by John Gohorry

Adventures and fates of seven birds freed in the town of Okuma, Japan, following the Daiichi nuclear reactor meltdown in Fukushima, 11 March 2011 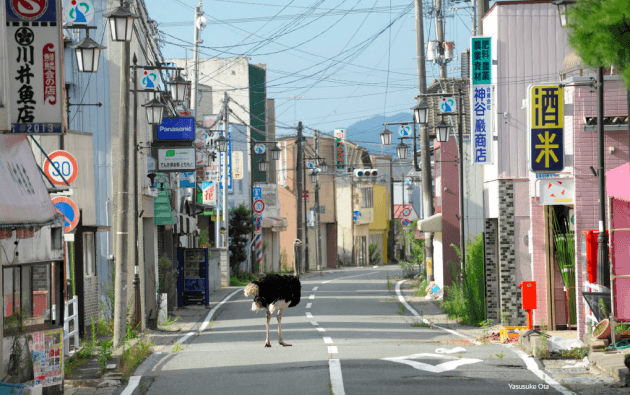 The reactor plant logo was ostrich;
The power of a strong bird
eating ore to ensure survival,

a paradigm of digestion, quirk,
a bird that stood out. The ostrich
was nuclear fission, taming one

and the other the same thing.
Yet the ostrich defies containment,
appropriation, prediction;

surreal, omnivorous, it ranges.
It devours the subjunctive,
embodies everything possible.

After the quake, the tsunami;
in the tsunami, seals shattered
that kept the reactors safe;

twenty thousand lives lost
and the cities abandoned
to their becquerel saturations.

Reprieve for unslaughtered birds
as the ostrich farm gates, torn down,
confer freedom to scavenge;

imagination as always skeined
by the limits of circumstnace
searching for food in the ruins.

Imagination is omnivore.
It digest timber, iron, concrete,
the nuts and bolts of existence.

It devours tragic, comic,
the grotesque, the absurd;
nothing is alien to it.

It runs unhampered
through the boulevards of the mind
discovering, salvaging, pulling apart.

It skulks, sprints, lashes out;
stop lights can’t hold it back.
It dreams what may happen.

Alban and Bounder
have discovered a sushi bar.
It’s a change after stones,

or not in due course.
A TV is blathering somewhere.
Alban kicks over a bar stool;

there’s iron in seaweed.
Technically, this is theft,
but Food first, then ethics.

APRIL 12, 2011
Dagger’s back on the block.
He appeared out of nowhere,
stood in the sushi bar doorframe,

and thrust in, as Captains do,
eyes steady, cold, full of menace.
Cloak followed, a few steps behind.

He split the town into districts,
each run by a Brother Bird,
made Fantail his First Lieutenant,

Einstein his Counsellor.
The Autonomous Ostrich Republic
is in place, open for business.

The Great Japanese Dictionary wants
the best word for a cohort of ostriches.
A flock, suggests Alban, while Bounder

proposes a pride. Groupie suggests
an adventure, Einstein an exploration.
No ostrich tolerates a containment,

none favours a rapture. Cloak wants
a concealment, Fantail a reinforcement
but Dagger is Major Bird and it’s his call.

An endurance? a disaffection? They bury
their heads in semantics; from now on
two or more ostriches are a survival.

SEPTEMBER, 2011
Einstein has spent the night humping Groupe
in the back of Haruto’s Bookstore. It’s dawn now,
and time to persue the bookshelves.

There’s black slime on the floor, seaweed
clogging the poetry section, and no sign anywhere
of an ostrich haiku. Was there ever one?

Sludge clings to their feet. Nibbling Kelp,
they take in a few lines of Basho—aubergines,
cucumbers, a frog. Einstein drags one foot

through the floor sludge. An ostrich must dream
of the infinite, wait for the blue wind’s coming.
This is the truth; Takamura’s book says it. 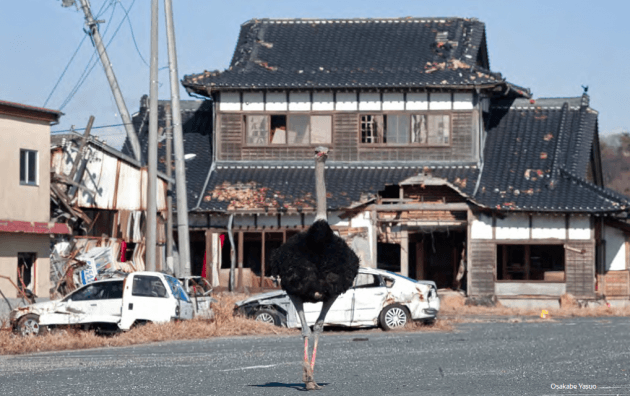 London-based John Gohorry is Poet in Residence at David’s Bookshop, Letchworth, Garden City. His thirty-three Ostrich Cadenzas were published by Shoestring Press in 2017.