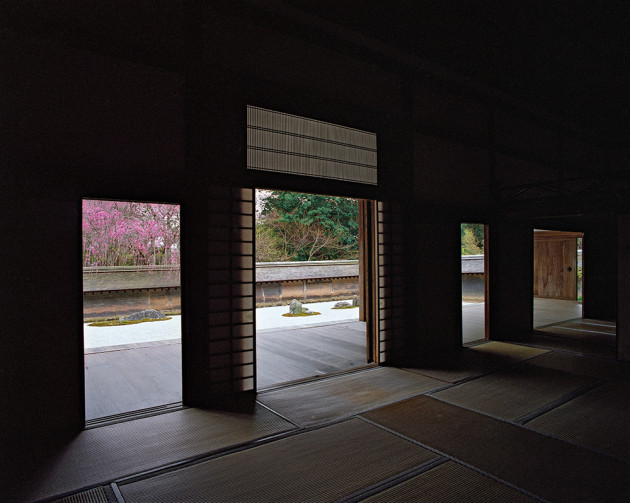 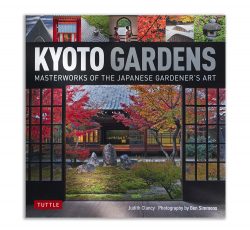 Where Western gardens engage and delight the senses, the Japanese garden, at least the more accomplished ones, provide the secondary and tertiary effects of being both thought provoking and aids to restoring our faith in nature.

Kyoto, described by photographer Ben Simmons in Kyoto Gardens as, “a unique treasure of concentrated beauty and spirit found nowhere else,” is a good place to start an exploration of the Japanese garden. Breaking away from the customary practice among garden photographers of excluding people from images, he shows us instead all the clumsy inelegance of visitors, with their cameras, handbags, personal effects, and at the Shisen-do villa garden, a woman in rubber boots carrying a plastic tub up the steps. Such images lend human touches, moments of interaction between formal landscape and onlooker, order and disorder.

Author Judith Clancy’s has lived in Kyoto for over 40 years; her credentials are unimpeachable. She divides Kyoto Gardens into four main chapters based on geographical divisions, a task made easy in a city where geomancy and town planning were synonymous. The book features many of the best known Kyoto gardens, such as Ryoan-ji and Kinkaku-ji, but includes one or two surprises, like the Mimuroto-ji paradise garden in the southern reaches of the city, and the often overlooked Toji-in. In the process of previewing Kyoto gardens we also learn about the history of the city, its religious sects and denominations, the text reminding us that it is not possible to fully appreciate many of these gardens without a basic knowledge of Buddhist principles. 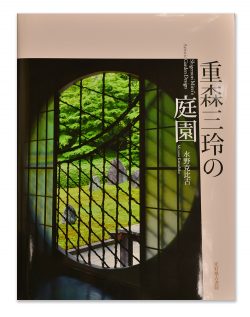 Much has been written and said about Mirei Shigemori (1896-1975), his experimental garden designs and controversial use of such materials as contemporary tiling, colored gravel, concrete, and large rocks that function as rivets, holding down and interlocking garden sections. Before visiting the gardens themselves, we can begin to form our judgments by glancing at Shigemori Mirei’s Artistic Garden Design, an illustrative work with text in Japanese that will appeal to more serious students of Japanese landscaping. Mizuno Katsuhiko is one of the hardest working garden photographers in Kyoto. He has largely confined himself to the old imperial city and has produced a body of work that is difficult to ignore. It is fitting that his life work on the gardens of Kyoto should lead him to a late-career appreciation of Shigemori’s work. This has drawn him out into the provinces, where he has photographed Shigemori designs at such sites as Mount Koya, and, in the case of the garden at Sekizo-ji temple, the fastness of rural Fukuchiyama.

Few members of the Japanese public appear to be aware of Shigemori’s name, but in garden circles his work continues to inspire an extraordinary amount of both loyalty and rejection. Studying Mizuno’s images, printed in fashionably bleached out, uneven tones reminiscent of old Polaroids, provide insight into why his work is so divisive. Now in his mid-seventies, Mizuno remains a vigorous force in the garden photo world. 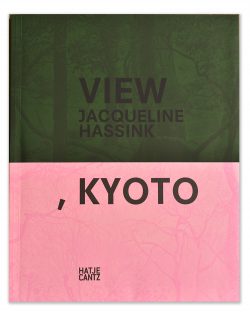 Where Japanese stroll gardens often contain elements designed to stimulate recognition of famous sites in Japan and China, or to stimulate the senses with what are sometimes over elaborate ornamentation that can on occasion result in a fair ground effect, the more circumspect temple gardens of Kyoto are aligned more closely with art. Adding to highly considered design and intent, many of the temple gardens of Kyoto are correlates of religious concepts not immediately apparent to the layman. It is, therefore, befitting that if, as philosophy professor Mara Miller maintains, Japanese gardens are a “subspecies of art,” an artist of Jacqueline Hassink’s stature has undertaken a visual inquiry into the unique compositional aspects of these designs.

If Persian pleasure gardens were meant to be observed from the shade of arbors, visitors to temple gardens are usually confined to viewing decks that define, and to some degree limit, perspective. Hassink’s images take us into the recesses of rooms used by the priesthood of each temple, thereby demonstrating the convergence of gardens and architecture. Given permission in two instances to rearrange the usual perspective by altering the interior panels of temple chambers, she was able to reorganize existing visual schemata into new settings, subtly expanding our way of observing architecture and arranged nature. Photographed from within, elements such as pillars, eaves and doors become framing devises.

To look for any length of time at these large photo plates is to enter into something akin to a trance state, to share a sensory experience of managed time and space. We shiver in a cold, open room at Shoden-ji, a temple located on a slight forested elevation in the northwest of the city, dab our faces of perspiration at Jikko-in, its exposed rocks scorching in the June sun, practically hear the cicadas beyond the boundary hedge at Entsu-ji, sense a breeze relieving the dark rafters and beams of Eikan-do’s partitioned rooms, smell, or imagine we inhale, the oil-stained clay walls of Ryoan-ji, feel our feet pass like socked phantoms over the polished hardwood floors of Shunko-in.

The gardens may have relatively low walls, but surmounting the more vertiginous barriers to penetration was challenging. “Kyoto, and in particular Zen Buddhist Kyoto,” Hassink notes, is a very closed world.” The fact that she was able to gain permission to enter some of these inner sanctums is a tribute not only to good connections, helpful facilitators and introductions, but also determination. Serious intentions count for a lot in Kyoto. A respectful approach and a good deal of perseverance resulted, among other rare opportunities, in Hassink gaining admittance to the interior of the main temple at Myoshin-ji and permission to spend an entire two weeks studying architecture at Shunko-in temple.

The project also involved interviews with head monks, representing three distinct religious schools: the Soto, Tendai and Rinzai sects. Touching on gardens and the practice of faith, these are voices worth hearing, some of the priesthood Hassink spoke with having spent much of their life in the proximity of these gardens, observing minute changes in growth, decay, light and form. The head priest at Renge-ji tells the author its landscape is a “not-garden,” an object of worship, a Buddhist altar, the loggia separating the divine and human realms. The latter section of the book contains a mutually interrogative conversation with brain scientist and Kyoto resident Gert van Tonder, who has a special interest in the perceptual effects of Japanese stone gardens. One imagines that, aside from providing valuable material, these encounters were also an intriguing learning process for Hassink.

The examination of Japanese gardens, like garden design itself, has been dominated by male writers and photographers. In the light of this, it is interesting to note that the first serious books in English on Kyoto gardens were written in the 1930s by American, Loraine E. Kuck. It may be nothing more than a felicitous coincidence, but in View, Kyoto we come full circle with a work of illustrative scholarship from another woman, one that will stand as a milestone in the slender field of innovative garden books.