Christmas in Tohoku with OGA for AID

What one child called a “dark wall” rising from the sea crashed down on Minami-Sanriku, destroying the city hall, and washing away everyone and everything in its path. People’s lives were turned upside down. Relatives and friends died. Houses were torn apart. Businesses and employment floated out to sea.

Following the destruction of the 3.11 tsunami, an inflow of humanitarian concern brought food and water to traumatized survivors, many of whom had witnessed death, and brushed close by it themselves.

As humans, we naturally empathize. We donate funds to relief and recovery organizations like the Red Cross. We give our clothes and canned goods. We volunteer if we can. We remove mud, rebuild homes, put objects in their proper places. But those swept away by the tsunami won’t return. The emotional recovery of survivors will take years, as will the economic recovery of their communities. 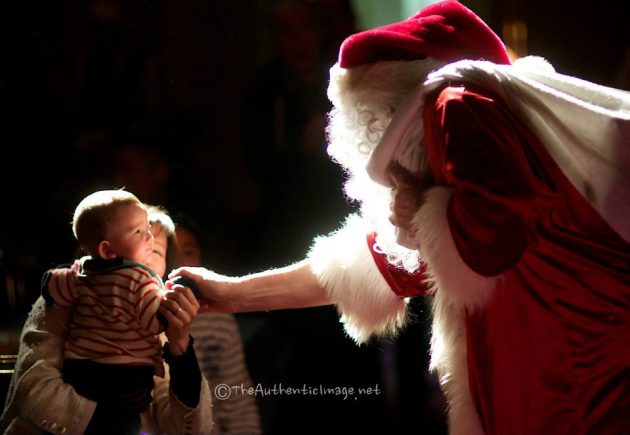 OGA for Aid has been one of the key organizations in Minami-Sanriku working to empower survivors. Angela Ortiz, her family and friends made it their mission to deliver supplies directly to individuals and communities isolated with no access to food and water. Immediately after the disaster, most survivors huddled together in emergency shelters, which naturally became the destination point for those trucking in supplies. Some, reluctant to relinquish their privacy in a cramped gymnasium, chose to rough it and constructed makeshift huts with scraps salvaged from the rubble. Others stayed in their still-intact homes, with no running water. Initially, red tape rendered them ineligible for aid. Even with that obstacle removed, visiting the emergency shelter on foot was a trek.

When Angela first drove down to Minami-Sanriku from Aomori, she thought she would just make a couple of supply runs. But recognizing the need for a supply distribution system, she stayed and created one.  Disaster relief became her driving passion, leading to a career change and the formation of her own organization, OGA for AID (named after her parents’ international school) capable of responding to whatever need was seen on the ground.

Now, three and a half years after the tsunami and earthquake struck, great strides have been made in Tohoku’s reconstruction. Recovery, however, is uneven, with some towns and areas further along than others.

“At every step of recovery there are always some survivors who end up falling through the cracks. People are still struggling in Tohoku – it’s just a little bit harder to find them. It’s not as obvious anymore,” says Angela. 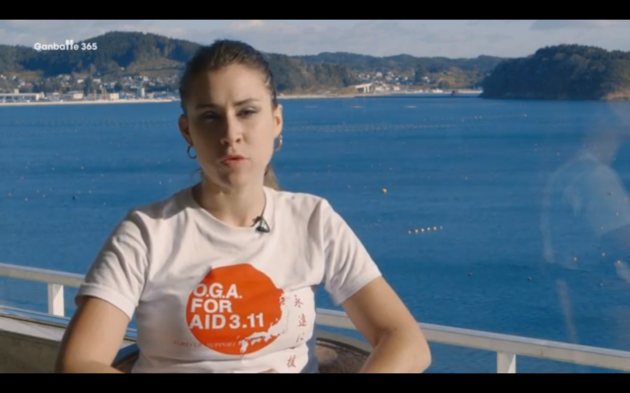 Born in California, Angela moved to Saitama with her family at the age of four when her Texan mother and Columbian father decided to pursue careers as English teachers in Japan. She and her ten siblings have spent most of, if not all, of their lives in Japan. In her early teens, her family relocated to Aomori where her parents opened their own international school, Ortiz Global Academy (OGA).

On 3.11 Angela was in Tokyo with her daughter when the disaster struck. Within days she returned to Aomori to support the relief efforts already set in motion by her family. Her father was organizing the logistics of truck rentals and her mother and siblings were transforming their school into a collection center for food, water and clothing donations.

“Japan is like family to us. So when the disaster happened we felt we had to help. It’s like the feeling you have when a relative is in need,” says Angela.

In the early morning of March 19th, 2011, Angela, her father and brothers caravanned three trucks packed with supplies to Minami-Sanriku. Theyarrived to see seaweed and clothes hanging from trees, cars strewn about, trucks on top of buildings, and ships washed far inland.   While her brothers unloaded the trucks, Angela and her father searched for a friend of a friend, employed at the Hotel Kanyo. Incredibly they found him and the hotel mostly unscathed.

Returning to Aomori that night, Angela and her family quickly set about planning their next trip. The local TV station informed viewers that OGA was a collection center and the school set up a PayPal account. Abe Noriko, the Hotel Kanyo’s owner, agreed to provide a home base and a van and driver to distribute supplies around the town. To develop OGA’s supply delivery system, survivors whose homes were still standing offered their houses as distribution points.

Still residing in temporary housing units, many survivors continue to face an array of problems and challenges. Tight-knit communities were torn apart when units were allocated by lottery system. The cramped units make for little privacy and tough living conditions. Larger recovery housing  is being built to remedy the situation but construction is in its initial phase with very few of the houses completed.  Furthermore, the rent and utility charges are not affordable for many elderly supported only by their pension.

Creating play spaces has not been high on the priority list and finding available land for them is not an easy task. While youth in their teens or twenties might take the forty-minute bus ride to Kessenuma to go bowling or sing karaoke, there are few parks or playgrounds for children to ride their bikes to or places for family activities. Some children live far from schools. Elementary school students in Togura, for example, lost their school in the tsunami and now ride a bus for an hour and a half every day to the school in Shizugawa.

Events and gatherings are instrumental in reunifying communities and giving kids a chance to just be kids. Addressing this need, OGA for AID every year organizes Christmas parties for the community. Around 175 survivors attended the first party in 2011. Nishimachi International Middle School in Tokyo ran a present drive, U.S. military personnel from Misawa volunteered, and a choir band from Aomori performed. Seeing the importance of community gatherings OGA for Aid resolved to organize more events with an international flavor, including an Irish Day and International Food Festival in the spring and a summer cherry-picking day in Yamagata.

In 2012 survivors actively participated in the planning and organization of the next Christmas party. Community leaders formed a small association to help send out invitations and prepare the food and gifts. “Seeing the local people develop ownership of that event convinced me more than anything that this event is really important and worth doing again,” says Angela.

Attendance climbed to 400 in 2012, including the mayor and city officials. OGA for Aid shuttled people to and from the party since the city’s bus system was not yet running. Due to lack of space in the temporary housing and lack of transportation many friends and family members would not have otherwise been able to celebrate the holidays together. The Christmas party, now the city’s largest annual event, still plays an important role in bringing people together at the end of the year when Japanese customarily gather for end of the year parties (bounenkai) and New Year’s Celebrations. 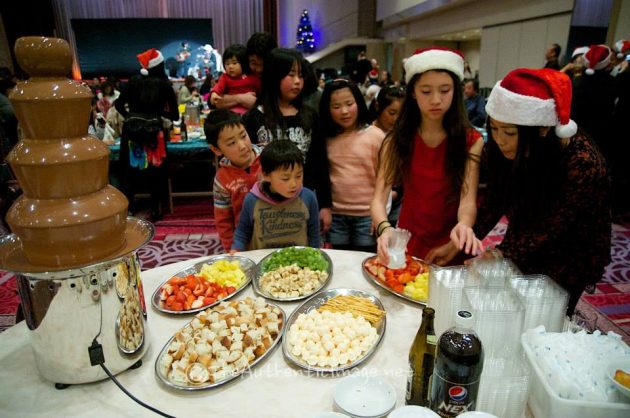 Last year, the party was held just a month after another disaster wrought havoc in Asia. Typhoon Haiyan slammed into the Philippines on November 8th killing over six thousand people and bring catastrophic destruction to the Visayan islands.  A hat was passed around the Christmas party as the tsunami survivors empathized with the Filipino victims.

Angela has fond memories of her own family’s holiday celebrations: “Christmas is one of my favorite holidays, because my parents just do it so well. I just wanted to recreate that for some of the survivors we’ve been working with and have an evening where we just laughed, and danced and ate and drank and had a great time.”

Right now OGA for Aid and supporters are gearing up for this year’s party scheduled for December 13th. Nishimachi International School is holding their annual present drive.  Around three hundred collected presents were distributed to kids in Minami-Sanriku last year.   Plans are even more ambitious this year as a Santa Bus (complete with the Santa Claus!) will deliver gifts to children in other parts of Tohoku the day after the party. “When some foreigners came dressed as Santa Claus, the kids’ eyes lit up, thinking that the real Santa had come,” says Abe.

“It’s been really hard for the kids in the Tohoku region. There are growing numbers of students who just don’t come to school anymore. The rate of truancy has increased and the kids just need something to look forward to. The present drive is one little bright spot that we can support. And they get so excited about it! It brings us joy to see their happiness. In a way, the OGA Christmas party uplifts all of us. It’s something that we believe in and want to continue supporting,” says Nishimachi International Middle School principal, Erin Robinson.

Christmas festivities are not the only thing in store for Santa Bus passengers (expat Tokyoites). By taking a tour of the region and hearing survivors’ stories, participants will see and learn about the reconstruction firsthand.  They’ll also have a chance to relax and take in Tohoku’s natural beauty when visiting tourist attractions.

Among the volunteers will be degree and exchange students from Sophia University. Every year Sophia students have lent a helping hand. “It’s a really great opportunity for the students to support survivors,” says anthropology professor David Slater. 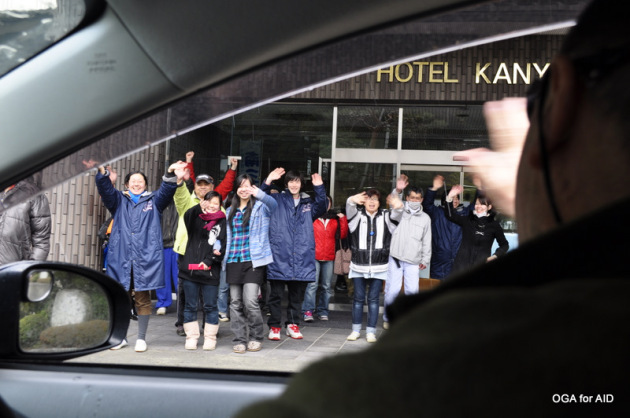 OGA for AID continues to connect the world to Tohoku’s realities. Angela Ortiz might be one of the last disaster aid workers to leave Tohoku. To honor her, the city recently named her an Ambassador of Minami-Sanriku.   She remains committed to seeing the recovery through to its finish.

“OGA for AID has won the confidence of the people in this area. Please continue to support them. Their presence gives us energy and aids our recovery efforts,” says Abe.