Afuru Nagatome is the co-owner of Mugen, a traditional Kyoto’s townhouse renovated with contemporary comforts, and thoughtful spaces that inspire interaction. 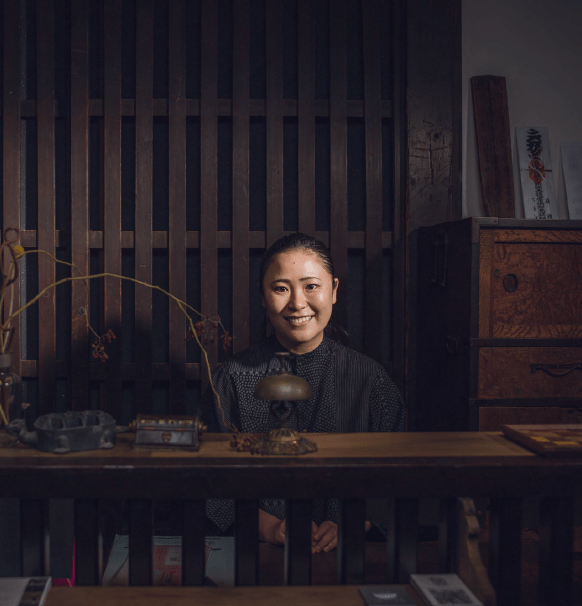 When long-time nomads Afuru Nagatome and her husband Kazuya arrived in Kyoto they were on a quest to find their ‘sui no suika’,(place to live out rest of lives) somewhere so special that it would entice them to finally put down roots. The young couple had already been on the road in their outfitted camper van for one year. Having travelled through Hokkaido and the Niigata ski fields, they thought they would merely make another pit-stop. “While we were working, mostly fruit picking in Kita-ku and in eateries, we connected with a community of like-minded locals,” recalled Afuru. “These amazing friendships were what made us feel we wanted to stay on a bit longer, and see what living in the area would be like.”

Afuru grew up in Kagoshima, were her grandparents ran a ryokan, but had visited Kyoto as a high school student. “That was so long ago that when I came her it really felt like the first time,” she explained. “While Kyoto may not be the biggest city, we felt that the atmosphere here was unique, it’s such a deeply rich place.”

She soon came across a 160-year-old machiya in Kyoto City’s inner north west that was once slated for demolition. Three years on, and the transformation that has occurred at the dedicated hands of Afuru and Kazuya is astounding. Open since August, their two-storey guesthouse accommodates a maximum of eight people, yet they still welcomed 500 guests in the first three months of business.

Prior to their trip around Japan, the pair had worked and travelled throughout Australia for two years. “We would move from place to place, in line with the picking seasons, and we also managed a guesthouse on the Gold Coast for some time,” Afuru recalled. “Many accommodations there had an underlying sense of fun and sometimes it was these places, where we were meeting people from all different backgrounds, that we enjoyed most!”

While it’s becoming increasingly popular to renovate traditional Kyoto homes into guesthouses, and capitalise on the tourism boom, Afuru’s methods and motivations are lesson common. “First we invited a lot of people from the neighbourhood to come together to help us talk about how we could make this old kimono store more liveable, while still keep its essence and charm,” she said. Honouring traditional elements, for example keeping the original mud walls, Afuru then installed a larger staircase, in-floor heating and modern bathrooms for guest comfort.

Many of the creative friends the pair met upon first arriving to Kyoto contributed designs and details to the guesthouse. Other notable elements include original interior lattice work repaired in the gilded ‘kintsugi’ technique, ceramics hand-crafted from earth excavated in the renovation, and a stone implement from the Edo Period that has been utilised as a feature in the garden.

Afuru didn’t set out to simply create a comfortable, authentic space, she wants to bring the people staying in her guesthouse together, as well as introduce them to the locals of the area, who often pop in to chat or drop off some produce. In addition to the welcoming communal kitchen and dining areas, the rear storage building has been converted into a bar for mingling too. “It’s been soundproofed, so that people may enjoy themselves into the late hours but, not disturb our lovely neighbours,” beamed Afuru. “By opening this place we have created our own space to have so many new encounters!”