On Genji Monogatari: A Conversation with Setouchi Jakucho

Born in 1922, Setouchi Jakucho has lived passionately and uncompromisingly, achieving success and fame in an often controversial career as a novelist spanning more than 50 years. In 1973, she renounced the world to become a Buddhist nun, and for 20 years served as head priest of Tendai-ji Temple in Iwate. Since 2007, she has headed Zenkobo, a sub-temple of Enryakuji, the Tendai sect headquarters on Mt Hiei. A committed pacifist, she carried out week-long hunger strikes to protest Japan’s involvement in the Gulf War in 1991 and the attack on Afghanistan after 9/11. More recently, she has visited Iraq to donate aid for children.

As an author, her focus is on deep aspects of women’s experience; she is also particularly well-known for her best-selling translation of The Tale of Genji into modern Japanese, completed in 1998. In 1997 she received a Japanese government award for her contributions to culture, and in 2006 she was awarded the Order of Culture by the emperor. Her regular public lectures are today so extremely popular, especially among women, that audience members have to be selected by lottery.

This interview was conducted at Jaku-an, her hermitage in Kyoto, which she built using the royalties from her books. 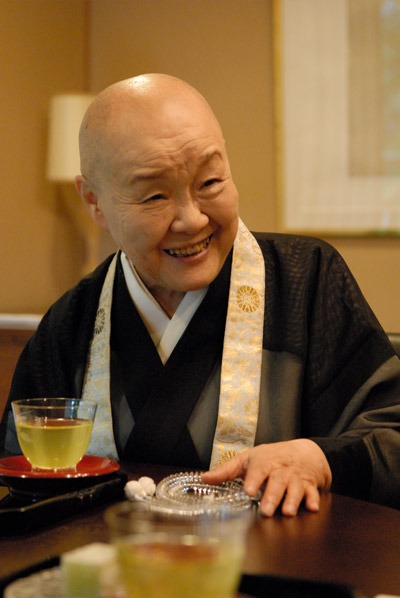 “I am now 86 years old, a very old woman, though I am the most active for my age in Japan. I started translating The Tale of Genji after turning seventy, though I had well prepared to start for many years by then. The day I went to sell my idea to Kodansha International — it was the only time in my life that I pounded the pavement to sell my work — an executive director came out, who had known me since I was still fresh in my career as a writer. As he also had come up the ranks, starting as a mere junior editor, we knew each other well, and he said to me very frankly, “It is an honor that you now offer us this great project; however, you are now already seventy years old, aren’t you? Will you still be alive long enough to complete translating all fifty-four chapters?” (Laughter) And I said, “I don’t know how much longer I can live. But, I will bet my life on it.” He said, “Then, we will too.” So, we made a contract with each other. But, look, they have made lots of money since then from the series. (Laughter).

TOYOSHIMA: In fact, I have a feeling that few Japanese read The Tale of Genji to the end.

SETOUCHI: You are very right. Isn’t it a real shame that so few Japanese have read a novel that is the nation’s and the world’s pride? After completing the translation, I was invited to the foreign press club. One reporter told me that he was called to his superior’s office before coming to Japan and was told, “If you are to work in Japan, read The Tale of Genji. You cannot understand the Japanese sensibility or way of thinking without it.” What was most impressive is that the other reporters agreed with him. They had all read Waley’s English translation before coming to Japan. They were surprised that their Japanese colleagues, you know, who were intelligent and supposed to be well educated, hadn’t read it. Without exception, whenever they tried to talk about Genji, the Japanese replied, laughing, “Oh, no, no, I never read that kind of stuff!” So, when I was questioned about this you can imagine how embarrassed I was.

What do you think is the reason?

Well, first of all, The Tale of Genji is a story of scandals within the royal family. Before the end of the WWII, no one wrote about or even mentioned such matters. However, the book was too authentic a Japanese classic to ignore, and so was printed in school textbooks. Only some excerpted lines of the most vague description were printed and so it was boring. In addition, compared to The Pillow Book of Sei Shonagon, which was written around the same time, Genji seems rambling and longwinded. I think that this made it look too difficult for general Japanese readers. But actually you can capture the meaning once you understand the rules concerning honorific expressions and you can tell whether it is now the Emperor and Empress or their retainers who are speaking. Today’s readers cannot even tell whether it is man and woman or two men who are sleeping together now. (Laughter) Therefore, the text style was not really suitable for a school textbook.

That is due to the influence of Confucianism on samurai society during the Edo period (1603-1867). In ancient Japan, there was freedom in love, but only for aristocratic men and commoners. Noblewomen were educated to serve the Imperial Court from birth. When a noblewoman received a love letter, it is not she who replied. First, her nurse or the court ladies would research the social class of the writer, and then they exchanged letters with him, impersonating the princess. After some time, the princess would be given a real ‘candidate’ to write back to in her own handwriting under supervision of the experienced ladies. There was no freedom for her. If she happened to fall in love with someone outside of the court, she would have been forced to separate from him. If the Emperor did not love her, she would be miserable. Even if she happened to be loved by the Emperor, she would still be miserable if she could not produce a male heir, as with Princess Masako in our times. And even if she were blessed with a baby boy, it would not only be she who was loved by the Emperor at that time…

As you know, the last ten chapters of Genji are often said to be different from the preceding chapters. Some even say that these chapters were written by someone else. Almost three-quarters of the women characters become nuns. The last one is Ukifune. The scene of her shaving her head is so detailed and real. Before Ukifune, whenever a woman character renounced the world, it was simply described with the words, “she renounced the world” and “Genji wept” and that’s all. With Ukifune, there are descriptions such as, “the lead priest told her to bow to the Buddha,” “face this direction” and “express your thanks to your mother and father.” The words, the sutras, and the order of the process are exactly the same as those I used! Then I understood: aha! Lady Murasaki herself had renounced the world when she wrote these final chapters.