In the center of Maruyama Park there is a very large cherry tree. Come the first week of April much of Kyoto gathers to enjoy the sight of its ‘weeping’ style branches at night, clothed in pink. It was cultivated by the grandfather of Sano Tōemon, the sixteenth generation of a line of Sagano gardeners. In addition to a career of landscape design, Sano has published books about Japanese nature, of which the most recent is a monumental photograph collection, Sakura Taikan (Shikensha, 1990). Last spring Sano took part in an exchange of trees between Kyoto and Rostock, a village in eastern Germany. A firm believer in hard work, he was on the job on the day of the imperial enthronement, when we went to meet him. 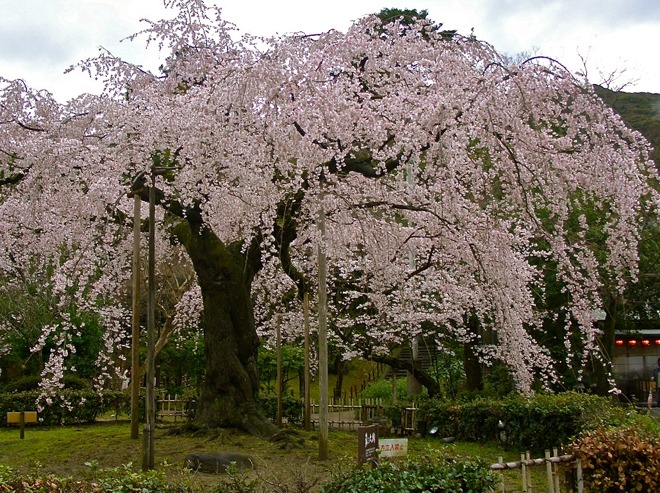 The works of my ancestors are gone. You can have seen many of our gardens in Kyoto before the war, but with the new era came the end of the big conglomerates, Mitsui and others. Their lands were subdivided and apartment buildings quickly went up where the gardens had been. Very basic thing have changed in how gardens are made. You design primarily to fit the site, and you have to make something appropriate to the era, too. We have to take into account things like air conditioning, and the fact that modern people wear modern, Western shoes. An entrance approach of the past would have been smooth flagstones or ‘tossed’ stepping stones; modern approaches are usually in concerte. Where stone expanses are still called for, the fine stone joinery of the past is gone. People want larger stones so they can save money on cutters and joiners. Vertical stones, which used to be very important, are Buddhist symbols. Now that religion is peripheral to the lives of most people, there is no standard for designing with stones. People choose stones because they think they are inherently attractive, not ‘correct.’

What constitutes the education of a gardener?

An oral tradition, if possible, and long observation. The children of gardeners are sent to live with their grandparents, so as to learn from them while the intermediate generation is busy at work. My four-year-old grandson already spends time gardening with me and with my own father, who is still alive. When he comes of age, he will be working with plants that were planted when he was born. We used to have that custom in Japan, planting seeds at news of a birth. When a girl was born a palownia sapling was planted, so that she could have a tansu chest of its wood for her trousseau. When I was born the seed for the next tree in Maruyama Park was planted.

How would a non-relative start out?

I would have a novice indulge himself in as much fun as he could bear, enjoying the nights while working days in the field. At most of Kyoto’s small drinking places you’ll see that all of the bottle are arranged on shelves behind the counter. I would tell the novice: look at those bottles and think about why they are arranged in that way, because there is always a reason, and drink while thinking about it. I would say: ponder the form of a woman, not simply the shape of her body, but the clothing and jewellery she chooses for herself. And her perfume. When you can fathom these things a plot of land is not so daunting.

Of course I am all for the conventional ways of learning. Visit many gardens, study Buddhist sculpture carefully, drink deep of history and all forms of traditional culture, and read, read, read. But don’t forget drinking. When you wander through town. When you wander through town under the influence you become aware of all sorts of things in traditional construction that you couldn’t see before. They were meant to be discovered with the aid of sake.

What are the sexual stone figures around your office?

Those? They were ordered by the owners of a hot spring in Ishikawa. At the site, which is a natural rock pool, we placed a large stone carved in the shape of the female organ at the top of the fall: the hot water flows through it and cascades down onto an upright granite phallus. There are more phalluses elsewhere in the pool. They are sized so that you can sit comfortably on the scrotum, with your back resting against the shaft. The ones here are prototypes, leftovers.

What did you bring from Germany, in exchange for the cherry trees you took with you?

I brought back a hundred saplings of linden, a species of bodaiju (lime). Like Indian bodhi trees, but more slender. They will be planting in a commemorative park. Another hundred will come, possibly more. The cherries we gave are being planted in a large park around a swan pond. There will be some Japanese details, but it’s not a Japanese garden. I don’t think think there’s a point to designing a Japanese garden in another country. Gardening appropriate to the site is the central point of Japanese landscaping, so a ‘Japanese’ garden on foreign soil would be a living lie. They rarely work, because the unspoken contract between the designer and the viewer is missing; the understanding that one party is being appraised for his mastery of the symbols whose significance the other understands.

Most foreigners like Japanese gardens, but can they appreciate them?

Of course. It takes a little time, though, to understand what they are looking at. To understand the culture of a place you have to stay until you can absorb three things: the hogen [dialect], the aji [taste] and the matsuri [festivals]. I really think that these days there are foreigners who know more about Japanese landscaping than Japanese. I’ve had a number of foreigners put in some time with my staff, from Belgium, the U.S., New Zealand… Usually they stay about a year, so as to see the full cycle of seasons. The first months are almost always difficult, but when they’re alright with the language I take them out drinking, and things are fine. Always have to nudge them to that first drink, though. Foreigners don’t seem to like drinking, and things are fine.

I’m interested in the work they’ve done in their countries. It might be cliché to say that Europeans are more academic, or that America is a culture of excess, but you can see it in their parks and gardens.

What does that say of Japanese, in foreign eyes?

You hear lots of talk about international harmony, sharing of culture and so forth, but there are elements basic to one culture that are, frankly, unpalatable to the people of another culture, even in gardening. Part of my relationship to a pine tree is pruning it, and plucking what are to me unsightly needles around the cone. Every Japanese gardener thinks it is cosmetically appealing, and it benefits the tree. When the Germans saw this very standard Japanese practice they got angry. To them beauty is nature left untouched. I can understand that, although it seems inflexible in a way. But working in Germany did open my eyes to something important. When it comes to building within the environment, the Germans, and Americans, are ahead of Japan. I was most impressed with new houses I saw built in woodlands. In Japan the developers would have ripped up the whole forest before they laid the foundations, and paved the river too. I know that in those countries some of the sensitivity to the natural environment is a reaction against past mistakes. But Japan is still two or three generations from its wake-up call. After the war the Japanese decided to ape the Americans, and of course they got it wrong. They wound up with the worst of American and missed the good points.

There have been ups and downs in Japanese history. Isn’t this just another wave?

Ha! The stupidity of this generation is the worst wave that ever happened. It’s a huge wave, capable of destroying everything.

Do you worry about whether your grandson will have gardens to build?

No, because whatever else happens, Japan is a rice-planting tribe. Everything that Japanese think and do can be traced back to the act of planting a rice shoot in a paddy, whether they know it or not. There’ll always be gardens.

One of the great things about Kyoto used to be that a lot of the gardens were not even visible. Every machiya [row house] had a naka niwa [central courtyard garden] that was tended and treasured as much as any of the rooms. Acres and acres of greenery in the city, all of it private. The machiya have gone now, but even the most unappealing modern buildings, if they can, leave space for some kind of a tsubo niwa [‘point’ garden]. Of course there are plot ratio laws for building, but if you look at the way developers treat that mandatory square of open space you’ll see that there is some attempt to get back to the origins of Japanese landscaping.

Will some new features enter the emerging history of landscape?

You know the open spaces with greenery gathered so as to feature placed objéts? There is a lot of that these days, that’s a new thing. The whole area around the International Conference Center — it could never have come out that way at any other stage in history, yet to me it is still quite Japanese. Tile is used a lot in landscaping; that’s a major change. The more successful modern stuff, the landscaping of major new architecture, is very angular, mechanical, with waterfalls slicing water into geometric planes. It’s the right landscape for that architecture.

If you were asked to introduce someone to the pleasures of the traditional garden, which places would you take them to?

None, actually, until they understood that traditional gardens were intrinsic to four distinct types of architecture — the palaces and mansions, the temples, the castles, and the minka country homes.

How would you guide a visitor who already knows gardens?

I would ask them to describe the kind of woman that appeals to them, then go to a garden, and have them find what aspects of it are like that woman. No guided tours. It is a mistake to praise the exemplary shakkei (‘borrowed scenery’) of Entsuji, for example, because the original gardener didn’t ‘design’ it. Mount Hiei was always there in the distance. He couldn’t possibly do it another way. His fine sense of shakkei is why we consider him a master. It is also why he should not be praised.