Beneath the auditory fragments diffused like industrial soundbites that ricochet between alleys designated as street is the insistent shuttle clack rhythm of the looms stitching out a skin of silk to wrap around the bodily frame. The ears feel the pulse of their patterned cadence buried under layers of bird chirps, the twing of bicycle bells and the roaring breath of traffic speedstopping as vehicles weave and crawl through the paved veins of the city trying to find an eventual destination. This is the heartbeat of Nishijin, Kyoto’s traditional fabric district where the manufacture of silk is unrelenting and the demand continuous.

The boarding house that I am staying at throbs with the constant shuttle of looms obeying their masters. Even in the owner’s living room, his grandmother and I face a wall filled with an assortment of colored threads neatly stored in coils. I am learning the ancient art of tea ceremony from this kindly old lady for the first time. After the initial demonstration and encouragement to try it for myself, the woman becomes engrossed in the afternoon drama of “Pro Wrestling” eminating from a console elevated above the tatami mat in the corner. The announcer can hardly hold his alarm as he screams “Giant Baba groggy desuyo! Abunai abunai, Baba groggy desu.” What I see beyond the bamboo whisk trembling in my hand is a gaunt, tall giant of a Japanese man with a horse-like face grimacing under a short crop of crewcut black hair sprinkled with gray. A stocky hairy Gaijin  wrestler of unknown, supposedly Middle Eastern origins, had just applied a submission hold known as the “camel clutch” on our hapless Japanese victim after singeing off his eyebrows with a blowtorch for a mouth. This rival wrestler is simply known as “The Sheikh” and is never seen without his headdress on. I sense any questions I have on the tea ceremony will have to wait as grandmother scrunches up closer to the screen cajoling her countryman to wake up. “Abunai,” she screams at his drowsy face as I slip out the shoji door unnoticed.

My roommate moonlights as a desk clerk at a guest house for foreigners and cuts most of his classes so he is seldom home. Most of the other boarders spend evenings in each other’s rooms screaming and jostling each other amid the familiar click and clatter of mahjong pieces being scrambled across a kotatsu table. This is there last fling at wasting time before the responsibilities of company employment and family beckon after graduation. The lone exception is a thin shy boy down the hall with a morose face who tells me he likes Ralph Ellison’s “Invisible Man.” He later drops out of the university. When a friend picks up his books to sell for him at a used book store, I’m told he now works on a road construction crew digging ditches.

When my roommate does return to the boarding house for an occasional stay, he wants to talk. He tells me he’s infatuated with a tall Australian journalist staying at the guest house but finds himself too shy to ask her out. Instead of turning his dreams to reality, he acts out his fantasy with me as an unwilling partner. Feigning sleep he begins to move his hand under the futon reaching out to stroke my legs. It’s been a curse to be born with little hair either on my legs or chest. My roommate later confesses as I yell at him to stop, “your legs are so smooth like a woman’s that I can’t help touching them.” His lovesickness for his foreign guest later takes the form of heartbreak when an older American guest, who calls himself a professor, takes her out to dinner. I later help him compose a letter to her in Australia expressing his true feelings that goes unanswered.

All of the rooms on the second floor of this rooming house become an icebox in the winter. The cold that descends upon this city surrounded by mountains chills the bones, seeping through the thin wood walls of our building. The only toilet we have access to is located on the ground floor at the foot of the stairs. In the morning our bladders ache and it is a real hazard for us to descend the creaky wood stairs with eyes half closed. One morning my roommate opens his curtain and starts screaming out the window at his neighbor. “Fukuda! Fukuda! Dame desuyo!” Across the gray roof we see the figure of Fukuda arching over his open window, his piss adding to the steady deluge of rain pouring off the tiles. A sleepy sheepish grin appears on his face as he tucks in the flap of his patchee (long johns) and crawls back under his futon. We can soon hear him fast asleep and snoring away.

The first legitimate lodging I have of my own is secured through the help of a Japanese girlfriend. She helps me read the notices of rooms available written on a sheet of ricepaper pasted in the window of a realtor’s office near Demachi  Yanagi market. It turns out to be a 3½-mat room in Shimogamo with one tiny window the size of a rectangular slot held up with a stick. The second floor of this old storehouse has been crudely divided into rooms using thin wood panelling. When a roommate who resembles a dwarf with a gimp farts, I can feel the sound of his blast resonate under the tatami like the rumble of an earthquake’s early tremor. A kitchen downstairs consists of two simple gas burners caked with grease and the haphazard toss of extinguished matchsticks strewn around the concrete counter. In summer, cockroaches own the place, whizzing and fluttering past our faces when we pull the string of the harsh fluorescent light.

The nicest room downstairs is taken up by a music student who dreams of Vienna and plays her Ashkenazy records for me over cups of British tea. A piano takes up most of the room.

When it rains, the backyard outside my window turns to mud. The owner’s pet dog barks shivering in the rain, chafing at his chain until his owner’s sons come out with sticks to beat him into temporary silence. His cries are dulled to a tentative whine the rest of the night.

Once, when the landlord sees my girlfriend visit, he stands at the foot of the stairs and bellows with one tiny finger held in the air “Onanokoakan! Wakaremasuka?” just so I understand she is not to stay the night. The neighbor ladies view me suspiciously behind formal smiles and bows on the street. Sometimes I can hear gossip about me in the lane below outside my window. “He doesn’t like a foreigner but he doesn’t act Japanese.”

Twenty years later I will walk these same streets with my Japanese wife and find this flimsy boarding house gone. The chalk-like stone of a Western-style mansion condominium fills the same location with more sleek authority. As we walk down the street heading towards the Kamogawa, a storehouse of memories wells up inside forcing my face to break out into a smile. 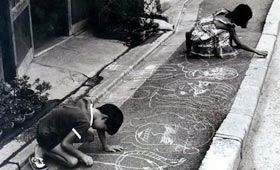