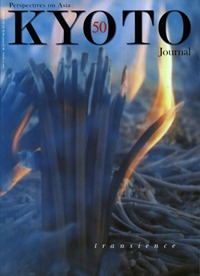 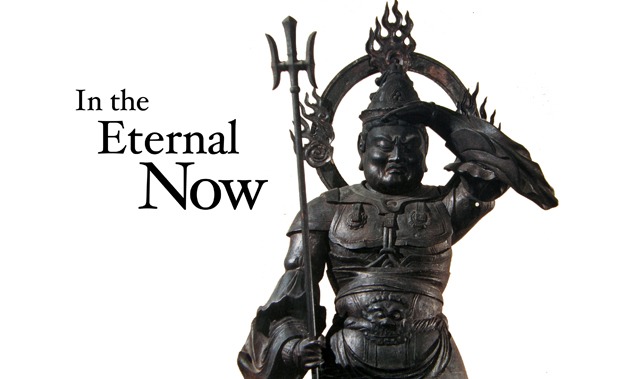 Overlooking Kyoto from his sacred mountain — one hand shading his eyes against the southern sun — the Bishamonten of Kurama has seen it all. Purple dawns, golden sunsets, the habitual arcs of moon and planets, seasons of rice-plantings, harvests, fire festivals, bamboo-cutting; typhoons, floods, earthquakes, unimaginable change. Eternally fresh hopes, lost opportunities, triumphs, grief, every human passion. Through the reigns of 75 Japanese emperors, he has been a witness to the slow cyclic flowering of successive generations of exquisite cultures, and their destruction in flames, in civil war, new enthusiasms, neglect.

One of the Four Heavenly Kings who protect the universe from evil, this Buddhist guardian figure was seen in a vision by the priest Gantei, who founded the Kurama temple in 770, and carved by an unknown sculptor in the flamboyant Chinese-derived style of that era. The Bishamonten is plainly no lotus-somnolent “gone beyond” Tathagata Buddha. His breastplate — once radiant, centuries ago — bears an implacable visage capable of downfacing malevolence in any form, and his outer robes swirl in a wind seemingly generated by his own concentrated energy; frozen in time. But it’s the intensity in his face that compels you to enter his long moment of stillness, and look more closely. 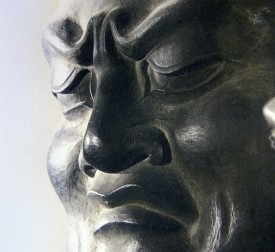 Over nearly two decades I’ve hiked up to visit this National Treasure sculpture more times than I can remember. At first, I saw only the stylized theatricality of the genre, strikingly manifested in a companion trio of dynamic celestial warriors, all gravely preoccupied in crushing recalcitrant demons underfoot. But there was something else, an element I couldn’t quite identify. I was drawn back, again and again. One day, without thinking, I tried to mold my own face to mirror the Bishamonten’s absorbed expression. — and couldn’t do it. None of the parts matched. That’s how I discovered the genius of that anonymous Heian master sculptor, who combined so precisely more contradictory emotions than any human countenance could ever express in a single instant.

Sometimes the Kurama Bishamonten seems about to burst into raucous laughter; is simultaneously just a blink away from bitter tears. Devastatingly fierce; achingly gentle. Enraptured; profoundly bored. Appears to listen, brow clenched in a migraine slash; lips as lightly relaxed as a sleeping baby’s. Tireless energy; and bone-weariness. Selfless humility, yes; and righteous rage. All in absolute focus. So many states of mind all at once, in that one face, one diamond-faceted consciousness.

Our everyday human emotions? As simple as elementary math — mere addition and subtraction. Dualities and polarities, in the face of complexities beyond our comprehension. Yet somehow the 8th-century sculptor of the Bishamonten perceived a sophistication of mind that could accommodate multiple realities without contradiction, and finessed that vastness into one simply carved block of wood.

Face to face with the Kurama Bishamonten, you can begin to feel what it would be like to find yourself in the presence of a living guardian deity embodying complete understanding of the complex human heart — and thereby, an infinite compassion — in the eternal now.