[P]arallel paths near Kyoto’s Silver Pavilion flank a narrow canal that flows from the vicinity of Nanzenji, a late 13th century Buddhist temple. To the north is Mount Hiei, to the west Kyoto University and the Kamo River, and to the east Higashiyama, literally the “Eastern Mountains.” You are on Philosopher’s Walk — tetsugaku no michi — a short walk in any direction to a tumultuous and glorious past. 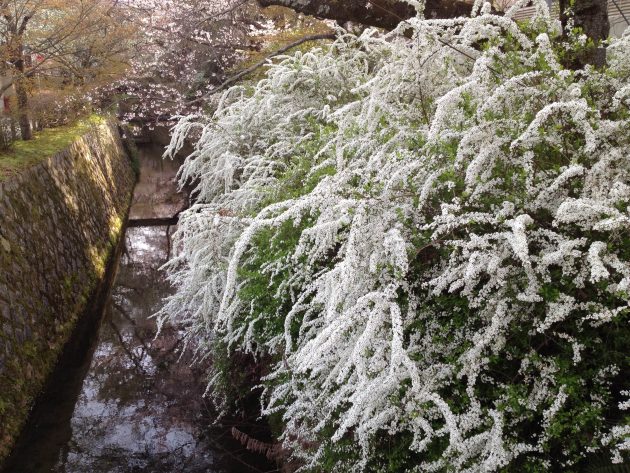 In the late fifteenth century, when the shogun Yoshimasa had retreated from power to build what would become a monument to the Japanese aesthetic, he chose a quiet spot on the outskirts of Kyoto at the foot of Mount Daimonji, in the Higashiyama. He would call it Ginkakuji — the Temple of the Silver Pavilion — a humbler version of his grandfather’s luminous Kinkakuji, or Golden Pavilion, a few miles to the west. Doubtless the “borrowed scenery” of the wooded Higashiyama provided an equally contemplative setting for Nanzenji, often destroyed and often rebuilt.

Not long after Nishida Kitaro was appointed to the philosophy faculty at Kyoto Imperial University (now Kyoto University), he “discovered,” writes his biographer Michiko Yusa in Zen and Philosophy , “that taking a daily walk helped him to switch his mood. He therefore began a daily routine, walking not only to the Silver Pavilion (Ginkakuji) but to the Honen’in and Nanzenji area, where the scenery is exquisite.” 1 That was in 1910, and until his retirement in 1928 Nishida literally wore the path that came to be known as tetsugaku no michi. Present-day guidebooks and maps most commonly render this as “Philosopher’s Walk” or “The Path of Philosophy” — each rich with suggestion.

For Nishida was not just aphilosopher; in some senses he was thephilosopher. The leading light of what came to be called the Kyoto School, Nishida is by general consent Japan’s greatest philosopher. As a public intellectual, he was ultimately drawn uneasily into the nationalist politics of wartime Japan. A cadre of Japanese students in Germany in the twenties and thirties had brought Nishida’s work to the attention of leading philosophers like Edmund Husserl and Martin Heidegger. But the taint of nationalism, Nishida’s notoriously difficult language and concepts, and the sloth-like pace of translating his prolific output into European languages contributed to the tardiness of his recognition beyond Japan as a philosopher of the first order.

It is fitting, too, to say that Nishida walked “The Path of Philosophy,” for he absorbed Western philosophy from the ancient Greeks to his European contemporaries. Not content to merely interpret Western philosophy to students and colleagues, he truly integrated it into Japanese philosophy, which sprouted in his case from the fertile soil of Chinese and Japanese classics and the practice of Zen. Nishida was something of a Renaissance man, devouring the biographies of great thinkers before him and always interested in the latest scientific theories. He found comfort in calligraphy and in writing waka , a traditional poetic form.

Nishitani Keiji, himself one of the Kyoto School’s leading thinkers, remembered Nishida in a book-length tribute to his teacher2:

In our day he always appeared in class wearing a kimono and low-cut shoes. Having never seen such a combination before, we found it strange. (Later on, he switched to straw sandals.) The first thing to strike one about him was his incomparably high forehead. I had never seen such a high forehead on anyone else. It looked almost as if it did not belong to his face at all but had an independent existence all its own.

The image is suggestive but does not entirely bear the scrutiny of contemporary photographs. More revealing is his style of lecturing. A “round-shouldered” forward-bending posture, writes Nishitani,made one feel that this was just his body’s way of holding itself together and in balance around its own center of gravity. To see him walk confirmed the impression. Every part of him moved briskly, his shoulders relaxing so that his arms could swing freely in time with his brusque gait. The whole of his body seemed to work in perfect harmony, and never more than when he was pacing to and fro on the dais during his lectures. This physical vigor seemed to lend special vitality to his words.

For his special lectures, to which Nishida usually arrived thirty minutes late:

He stood on the platform, mumbled for a while in a low voice, and then began to walk to and fro. When he grew excited about the subject, he became quite oblivious of his pace, gestures, and facial expression. The words flowed out of him as if charged with electricity and occasionally erupted into flashes of lightning…. To me it felt like listening to a great piece of music—at times feeling struck by something in my innermost being, at times wafted into flight as on the wings of a bird. His lectures truly touched the spirit.

The intensity of Nishida’s intellectual endeavors, complicated by conflicting desires to make a name for himself and to honor the Buddhist ideal of “letting go the things of this world” may have contributed to a certain distance from his family. Four of his eight children and his first wife, after a protracted illness, preceded him in death. Surely Nishida’s brisk walks among the pines and ancient temples provided some measure of solace.

Since the ancient Greeks, philosophers have found walking uniquely conducive to productive thinking. In Raphael’s famous and fanciful painting “The School of Athens,” Plato and Aristotle almost alone are imagined “in stride.” Aristotle’s followers were known as Peripatetics — literally “those walking about” —in reference most likely to Aristotle’s practice of walking with his students while they philosophized or to the Lyceum’s public walk, their frequent route. Immanuel Kant was famous for the clocklike regularity of his walks in late 18th-century Königsberg. Jean-Jacques Rousseau and Henry David Thoreau penned entire volumes on the art of walking.

except when he specifically went out for a walk with his friends or colleagues. The primary purpose of these walks—some inner restlessness, which is characteristic of Nishida, combined with the need to stretch his legs and take in fresh air and relax his mind. He also appears to have done a lot of thinking while taking a walk.

Nishida’s walks, according to Professor Yusa, would extend for two hours or more. Disclaiming knowledge of a specific or typical route, she cites in an e-mail the tetsugaku no michi,

which is supposed to be based on Nishida’s route. I think he liked this route because it was quiet, the path was in a wooded area, and in those days there must have been very little traffic. Also, there were famous temples along the way, such as Honen’in, Nanzen-ji, Ginkaku-ji. I think …the path was for Nishida both familiar and interesting.

But perhaps not too interesting. According to Ken Mogi, of Sony Computer Science Laboratories in Tokyo, Nishida may have been “bored into creativity” by the familiarity of his almost daily walks. Mogi, himself a veteran of Philosopher’s Walk, suggests that every person’s Philosopher’s Walk “is the path that they frequent in their daily life. You don’t have to go all the way to Kyoto to have an inspiration.”

Walking and other forms of exercise pump blood to the brain, surely a boon to creative thought, provided that too much concentration is not required for the activity itself. Nishida’s walks were “of course good for his health,” says Professor Nishitani,

but clearly these walks were also meant as a kind of retreat in the midst of activity, as a time of meditative exercise or kinshin. No doubt, too, these walks gave him new ideas, the sort of ideas that the body grasps better than the brain.

Professor Nishitani records an early instance of a Nishida walk stimulating a profound idea, one which would become the starting point for all of Nishida’s later work: pure, direct experience working outward.

I remember Nishida once telling me how, on a walk in Kanazawa, a bee or gadfly buzzed near his ear, and that noise suddenly awakened in him an awareness of the standpoint of pure experience. It is the moment of direct hearing, before one has time to discriminate between oneself and any thing.

The views—and their deeper meanings—along Philosopher’s Walk and its nearby temples can still inspire awe and wonder. Nishida would no doubt feel in familiar surroundings glimpsing the upper story of the Silver Pavilion above the trees or walking among the graves at Honen-in. Even hugging a bank of the narrow canal flanking tetsugaku no michi, the philosopher might at a certain time of day or in a certain season feel at home, despite the shops and houses that have sprung up. Whether he would choose to do his deepest thinking here is a matter of speculation, but Nishida’s own words, etched (in Japanese) on a low stone along the Walk are perhaps a clue:

Let others do as they will,
I am who I am.
At any rate I will walk the way
That I make my own.