This is an excerpt from KJ contributing editor (and garden expert) Marc Peter Keane’s new book, dear cloud, a series of letters home by a long-distance traveler with the rare empathetic gift of being able to fluidly enter other existences — of people, animal or plant species — and to merge even with the essence of particular places. 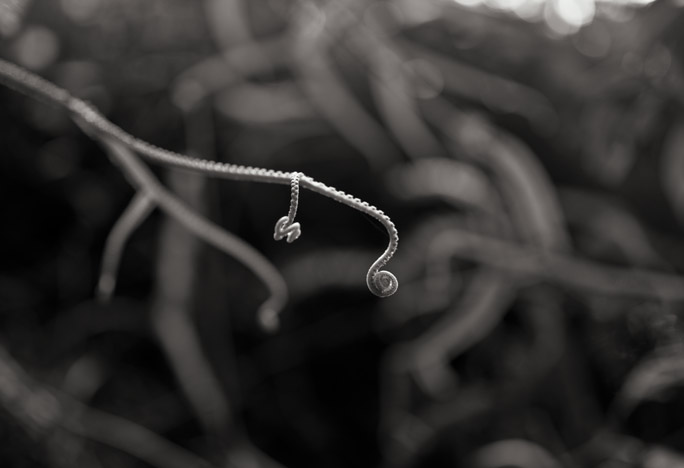 i have been a fern unfolding.
in a forest of deep slanting shadows, close to the ground with its many tiny scratchings and slitherings, surrounded by the steady rumble and rush of a waterfall, i was a fern. in the early spring, as the frozen ground melted and water wicked up through the deep soil with the sputtering sucking sounds that springwater makes, as the sun streamed through jagged webs of naked branches casting thousands of black lines across the mossy ground, as hundreds of tiny creatures scurried about with their busy preparations, calling awake!, awake! with their many little noises, i lifted my furled head from the forest floor, slowly, slowly, a coil of life unwinding toward light.

the motion was so graceful. this rising and outward rolling, expanding and opening, beginning as a clasped inward thing and ending fine and frail and stretched out to the sky like an opened palm.

summer came and i hardened and thickened, autumn tinged the edges of my leaves with bronze and russet, and as winter set its frigid nights upon us, i withered, my stalk weakening until i bent, curling up on the ground, brown and dry.

i have been a fern.

i have been a kangaroo pup, just born and twined around a teat in my mother’s pouch

i have been a spider, dried by desert winds, tucked behind a rock on a high stony plain, pulling slowly into myself, balling up to die and be blown like tumbleweed from stony pocket to stony pocket

i have been an infant snake, wrapped around itself twenty times inside an egg, unreeling through a hole in the soft shell

i have been a jacamar chick that fell from its nest and broke on the ground, my wings folding ever tightly around myself with my final breaths.

i have been many things. around here, you begin curled. uncurl. and curl again at the end.

it is the way of things.

The book is available online, also as an eBook.