Being chased they hide themselves

Around the end of June, when the summer nights begin to resemble a damp wool blanket thrown over our house and the rainy season pounds relentlessly onward, my husband and I like to drive out to a village in the nearby mountains called Oroshi. We park on one of the slender roads that run between sunken rice fields, turn off the engine, and let our eyes adjust to the heavy darkness. In a minute or two, pinpoints of yellowish light begin to swarm up the grassy banks towards us. Fireflies! The omnivorous beetles use their flashing rear ends to flirt with potential mates. What attraction we with our dull shadowy skin hold for them I don’t know, but every year without fail, they come. 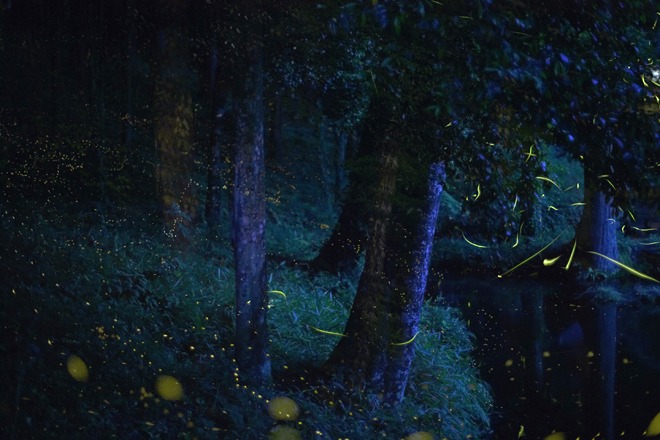 My husband and I are only the most recent generation in a nation of legendary firefly enthusiasts. At least as early as the Heian era (794-1185), noblemen and women enjoyed nighttime firefly-viewing excursions to the countryside. For the ancient Japanese the firefly was a symbol of both love and war. It was the quintessential sign of summer in endless poems and children’s songs, the motif of lacquer objects and sword furnishings, and the centerpiece of a charming episode in the world’s first novel, The Tale of Genji, in which the hero provides his brother a glimpse of a beautiful woman’s face by releasing a bagful  of fireflies in her bedchamber. In other legends, they were said to be the spirits of warriors who fell in the monumental 12th-century battle between the Minamoto and Taira clans.

More recently the firefly has become a symbol of Japan’s bygone rural landscape.  Along country roads one sees painted wooden signs advertising the local “firefly village,” that idyllic if increasingly rare place where the rivers run clean, the lights aren’t too bright, and the banks are still grassy (three requirements of firefly life). Apparently, the once ubiquitous insect has entered a global decline. Details of this unfolding tragedy remain hazy, but some blame bright lights for interfering with the insect’s ability to send its mating messages.  Others point to water pollution and still others to the over-development of riverside environments. Whatever the cause, one more piece of what makes the world an enchanting and mysterious place is slipping away.

And so we environmentalists find ourselves concocting reasons to save a creature we have long been satisfied simply to love. Fireflies are indicator species, we entreat, ambassadors for dark nights and pure streams, without which they (and quite likely we too) will slowly fade to black.  They are the potential source of medicines and biomimetic inspiration and who knows what else.  Yet in the end these arguments, like all piecemeal cases for conserving biodiversity, are nothing compared to the pure glory of a glowing, flying creature that predates Lite-Brites by 50 million years. If fireflies have a meaning, it is that the world is beautiful to us, that we are part of it and our hearts were made to love it. That, for me, is reason enough to fight for fireflies and all the other magnificent diversity of life on earth.