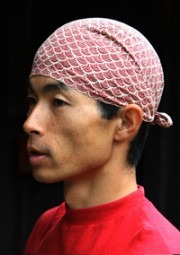 North of Kyoto city, in an extensive area of Kyoto prefecture recently incorporated into the new city of Nantan, lie the satellite communities that make up the country town or cho known as Miyama — famed for its thatched houses, and home to thatcher Nishio Haruo.

A nomadic childhood bound up in his father’s far-flung domestic business postings meant that school was always an unsettling affair. It was only when Nishio discovered a passion for philosophy in his second year of high school that he found some enjoyment in school life. Philosophy became his major at Kyoto’s Otani University. Graduating in 1994, he stumbled across a job ad for apprentice thatchers needed to salvage the under-manned craft in Miyama. Smiling wryly, he recalls, “I was thinking this is interesting, but I could not even read the Chinese character for kaya (miscanthus) — the very thatch material now at the heart of my life!” So, with no more than a hastily sought dictionary definition and a vague sense of righteousness in setting out to fill the shoes of retiring (and expiring) thatchers, Nishio leapt at the job offer, and has never looked back — noting that Miyama is very much his hometown, as he has never remained longer elsewhere.

He survived the initial shocks that came with the parochial aspects of country life and the rigors of manual labour. Clinging to the belief that his was somehow a worthy cause, he persevered and set about becoming a professional thatcher. On the way, he has researched his craft in the UK and earned qualifications as a realtor and grade-2 architect. Nishio now thatches all over Japan, networking with other thatchers, participating in thatching workshops and conferences, and learning different regional techniques, which he puts into practice wherever possible. In doing all this, Nishio has laid aside some of the traditional customs and techniques of his craft to evolve into a resourceful pioneer, not afraid to pick up new ideas and new tools if they make thatching more viable.

Although pragmatically contemporary in his approach, Nishio also eruditely expounds the ancient socioreligious elements that he sees in thatching. “Miscanthus roofs,” he asserts, “are not just derived from the ancient need for a roofing material but have, over the millennia, taken on subliminally religious connotations. These were far more tangible to the ancients, but they are still vaguely palpable today. Ise-Jingu has had thatched shrine buildings for well over a thousand years. Miscanthus has been the roofing material of choice there at each twenty-year renewal because it is regarded as a pleasing symbol of perpetual nature to the shrine deity. My observations lead me to believe that the present-day insistence on using miscanthus stems in part from a subconscious upholding of ancient beliefs in which shrines were emulated to please the gods and weave into structures a sense of permanence as represented by miscanthus, a hardy grass growing deep in the past, growing today and surely growing in distant tomorrows — in other words, an eternal source.”

Turning the subject to the present day, this normally laconic thatcher talks enthusiastically about his desire to ad-minister all aspects of saving thatched properties, by not only rethatching them but also by planning and overseeing refurbishment, inside and out, so that they retain their traditional ambience but offer greater comfort. By keeping costs down, he hopes to make such all-inclusive restoration projects attractive to would-be customers who otherwise would have roofs shrouded in cladding or have entire houses demolished to make way for new and often incongruous ones.

According to Nishio’s own survey in 2006, there are approximately 600 thatched properties in Miyama (population 5000). Of these, some 200 are buildings where the thatch is visible, the rest being concealed, clad in various roofing materials. “Corrugated metal cladding,” he explains, “emerged nationwide in the 1960s, and it now includes several materials, often dressed up to look like ceramic roof tiles. Even in Miyama — a region that boasts the pristine, tourist-teeming thatched village of Kitamura, a national preservation site — there is an alarming surge in roof cladding.” Nishio puts this down to not only the excessive cost and maintenance concerns involved in rethatching but also to the lack of local policies, regulations and funds for areas other than the famed Kitamura.

Nevertheless, Nishio sees these clad roofs as an opportunity to win back a number of thatched houses: “An unintentional consequence of cladding is the preservation of the original thatch underneath. And older clad properties are in dire need of renewal. Therefore, if owners can be persuaded to unclad, to repair and rethatch, then the rapidly disappearing vista of thatched hamlets dotted up and down the many valleys of Miyama could become a common sight again, without building afresh.” Warming to his subject in brainstorming fashion, Nishio enthuses, “If this were the case, and other environmental issues taken care of, Miyama could realistically seek approval as a World Heritage Site.” Heady words, but not unbelievable if the rusting shrouds could be lifted.

Nishio knows that for this vision to come true there would have to be a radical rural rethink — a change in local mindset that sees the demise of the thatched roof as the inevitable price of progress. More comprehensive grants and incentives would be needed for homeowners, as well as stringent town planning and much greater use of Japanese heritage protection schemes such as “listed building registration” (toroku-yukei-bunkazaiken-zobutsu). Nishio, who at heart is a social entrepreneur, avidly advocates this, saying, “Registration not only assures elementary preservation of older properties but also raises awareness and brings in central government funds specifically for preservation work, which in turn empowers local homeowners who are lobbying for better town planning.”

Nishio concludes that while the picture in rural Kyoto prefecture is not yet optimistic, the struggle to keep thatched roofs visible goes on. He himself will do his utmost to preserve and increase the thatched landscape of Miyama and other locales, while also exploring the feasibility of building and thatching traditional Japanese houses and tea arbors overseas as a means of stimulating international interest in traditional Japanese architectural aesthetics.