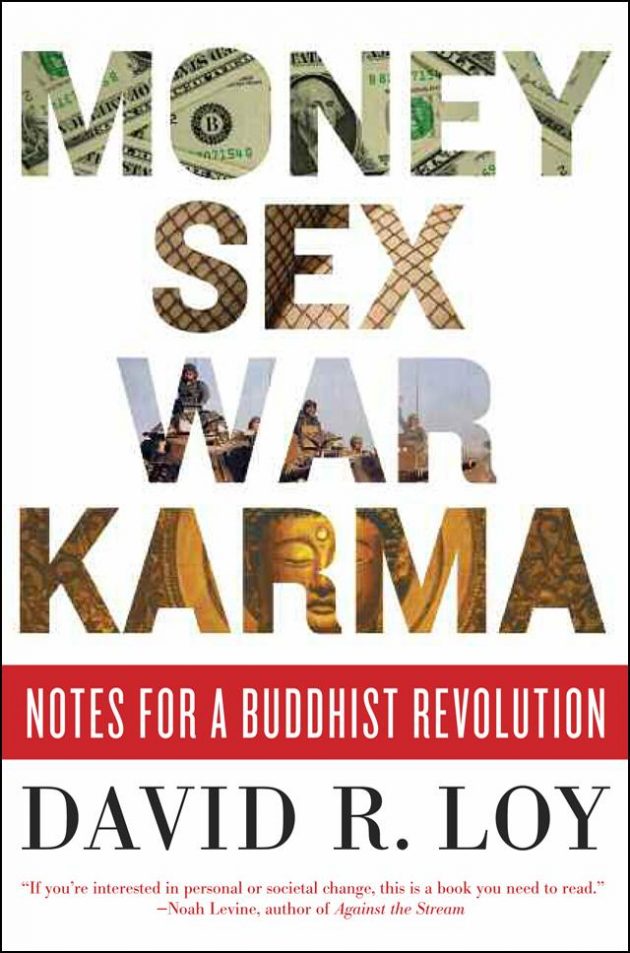 Central to the thought of Buddhist philosopher David R. Loy is the notion of “lack.” “The sense of self,” Loy explains, “is shadowed by a sense of lack that we feel but do not understand, so we usually try to resolve it in ways that make things worse.” Foremost among these ways that make things worse are the relentless hungers some come to feel for money, fame, sex, and even for war. With each of these, Loy suggests, we attempt “to resolve a spiritual problem — our ‘emptiness’ — by identifying with something outside ourselves, which can never confer the sense of reality we crave.” Buddhist teachings, Loy believes, can help us to understand the true nature of lack and the havoc it causes, and because they can perform this necessary function, he feels it is important that Buddhism remain vital in the twenty-first century.

Thus Loy appears to have written his Notes for a Buddhist Revolution with two aims in mind. First, he wants to make us aware of lack, and of the problems that arise from attempting to mask our lack in ways that only make things worse. Second, he hopes to convince us that, because Buddhism offers wisdom that will allow us to understand lack and its consequences, it would be a tragedy if it disappeared. The odd thing about this double-pronged approach is that it means his book is aimed at two audiences — groups of readers between whom, one guesses, there will be little overlap. First, particularly in the early chapters of the book, Loy seems to target those whose life on earth is filled with suffering: pain occasioned by the “lack” that defines their being and which they believe they can assuage by getting more money, or fame, or sex, or something. The other audience Loy appears to be addressing — and clearly they are the ones with whom Loy is most concerned — are those with an investment in Buddhism, those who would be bereft if, in the twenty-first century, Buddhism withered away and died, and so want to find a way to keep it relevant to our times.

The groups are unlikely to overlap because few of those wannabe Warren Buffetts and Britney Spearses would even notice if Buddhism disappeared, just as few of those with well-worn meditation cushions, those who purchase books such as this one, will be obsessed with money, fame, or sex. Surely even aspirants who have progressed only a step or two on the path will (like many of those not on the path at all) have things on their minds other than getting rich and famous, or even getting laid.

Loy’s book will be a stimulating read, however, even for those who are neither Buddhist nor suffering from some supposed lack. It will be stimulating — at least for those who don’t share Loy’s basic worldview (he is a Zen teacher in the lineage of Koun Yamada) — because so many of Loy’s assumptions seem, on their face, to be untenable. That a thinker of Loy’s caliber champions such notions, though, makes one stop and reconsider. As one questions Loy, one is forced to question oneself, and therein (for non-Buddhist non-sufferers anyway) lies the prime value of his book.

One finds oneself in fruitful argument with Loy — and perhaps with Buddhist dogma — as early as the second page of his first chapter. Dukkha, Loy explains, is best understood as “a basic dissatisfaction, a dis-ease which continually festers,” and can be divided into three categories. The second of these is impermanence. “Knowing that death is inevitable casts a shadow that usually hinders our ability to live fully now,” Loy writes, and one wonders how he can believe this. Surely, especially for those of us who have the comfort of being non-religious and thus entertain no fantasies of an afterlife, it is our certain extinction which compels us to savor every day. Loy believes there are people whose “[knowledge] that death is inevitable casts a shadow that… hinders [their] ability to live fully now,” but there must be just as many who are only able to live fully now because of their knowledge that death is inevitable.

The third type of dukkha has to do with the understanding that “there is no unconditioned self within our constructed sense of self,” an idea accepted not only by Buddhists, but also by most secular intellectuals. That one’s self is merely an aggregation of one’s experiences, habits, and memories (though genes must come into it, too), is, according to Loy, “the source of . . . our worst anguish,” but once again, it is difficult to understand why this easily grasped reality should give rise to such misery. Those wedded to the notion that there are ghosts living in our bodies that will continue to exist even when our corpses have been digested by worms may be troubled by the insubstantiality (if they can be brought to believe in it) of the self/soul, but it is difficult to understand why the rest of us should be.

If we fail to see why the gimcrack nature of the self should give rise to intense anguish it may also be difficult to accept that the insubstantiality of the self is the reason that people develop pathological obsessions with money, fame, sex, and the other symptoms of lack Loy discusses. It is undeniable, however, that some people do develop these pathologies, and that the actions of some of those afflicted are having a catastrophic effect on the world. One may doubt that the awareness of death or the flimsiness of the self should actually cause much suffering, but there can be no doubt that greed and lack of loving-kindness (to borrow Loy’s Buddhist terminology) cause a great deal of misery, especially for those not cushioned by first-world affluence.

Can Buddhism, even in the “engaged” version that informs Loy’s thought, help us to do the work necessary to end the humiliation of the poor, to stop the destruction of the environment, to rein in the warmongers? Buddhism might, in its teaching that we are one with all that we exploit, help some to understand that they can never be separate from the earth and everything that lives on it, and thus must tread carefully. It may help some to see that the poor are not other, that their pain is real pain, and it may help some to grasp that the enemy is not evil, or anyway, no more evil than we are. “I suspect,” Loy sums up, “that Buddhism has little distinctive to offer in the short run, except for emphasizing less dualistic ways of thinking as an alternative to the worldviews that got us into this mess.”

Less dualistic ways of thinking are probably essential to our survival, but such thinking is not exclusively Buddhist, nor even necessarily religious. The late Richard Rorty, for example, one of the preeminent secular philosophers of our age, writes powerfully of the need to acquire “the ability to think of people wildly different from ourselves as included in the range of ‘us.’”1 The only thing that all human beings have in common, Rorty argues, is the ability to feel pain.2 We must come to understand that “their” pain is as real as “our” pain, and it is not, he writes, “philosophical or religious treatises” which will bring us this necessary understanding, but “detailed descriptions of particular varieties of pain (in, e.g., novels or ethnographies).”3

Loy never goes so far as to suggest that Buddhist practice is the only way to see beyond the illusion of separateness that has divided us from each other and from the earth; that a secular thinker such as Rorty is able to arrive at similar conclusions with the aid of Buddenbrooks4 rather than Buddhism demonstrates that it is not. Those of us who value the engagement of engaged Buddhists more than their Buddhism, who see that Buddhism may be helpful, but is not necessary, and who, like Rorty, understand the power of art and narrative, won’t much miss Buddhism if Loy’s project fails and Buddhism, along with the illusions it seeks to eradicate, vanishes.