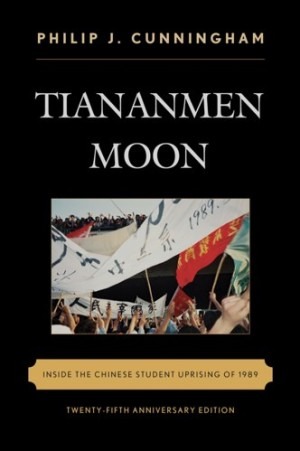 Memories have inevitably faded during the 25 years that have passed since the tragic end of the 1989 Tiananmen student protests, and for the younger generation in China, it’s hardly even a blip in the country’s historical flow to present-day prosperity. At the time, the Chinese government branded participants as treasonous counter-revolutionaries, and has never acknowledged the extent of its crackdown; historical accounts of the hunger strike and subsequent full-blown occupation of Tiananmen Square, including the iconic images of the gleaming white 10-meter Goddess of Democracy displayed in the People’s Square, and a man armed only with two shopping bags halting a column of army tanks after the bloodshed, are undoubtedly blocked by online censorship. Even in the West, those images are most likely the extent of any casual observer’s recollections.

For anyone interested in gaining an insight into how it felt to be there, for the entire four weeks of the protest up to the darkest night of the month, when the movement was crushed in a small-hours massacre, KJ contributor Philip J. Cunningham’s Tiananmen Moon provides a uniquely informed inside view. Enrolled as a foreign graduate student in Beijing Normal University, and already functionally fluent in Chinese, Cunningham was drawn into the demonstrations by the enthusiasm of his student friends (as described in “The Road to Tiananmen Square,” a chapter published in our Street issue, KJ 55, back in 2003). But not without some misgivings:

“The mood is buoyant, cheerful; the air full of familiar shouts, earthy Beijing greetings, and boisterous sing-alongs. … Standing on the perimeter of the swirling, excited pack of protesters, I am hit with a pang of self-consciousness. Not because I am over six feet tall, a 190-pound blond man in a sea of black hair and thin physiques; this is a political rally in a country where foreigners live in separate buildings, eat in different restaurants, and shop in different stores using different money from local people. Everywhere I go, thousands of curious and sometimes resentful eyes observe my every move. Any lapse of judgment on my part will be magnified many times over because of the stigma of difference.”

While his initial self-consciousness never completely disappears, he is quickly propelled deeper into the action, hired by overseas news teams (including the BBC) as a fixer, interpreter and interviewer, a role that brings him into direct personal contact with many of the student leaders. Most notably, he records a shocking “last testament” video interview with the fugitive 23-year-old “commander-in-chief” Chai Ling, one of the original hunger-strikers, in which she tearfully and unexpectedly reveals the stakes involved, admitting the leadership’s ultimate intention to provoke violence that will solidify wider support for the cause. “What we are looking for is, it’s bloodshed. In the end, the government will use the butcher’s knife against the people. Only when Tiananmen Square is washed in a river of blood will the whole country wake up. But how can I say this to my fellow-students?”

History — in progress — is messy, contradictory, grievously unpredictable. (And extremely difficult to grasp and report on in real time, as shown by the hapless antics of various professional news teams grappling with the chaotic circumstances). Cunningham describes his book as “a testament to the beauty and wonder of a popular uprising that went better than anyone had a right to expect before tragically going awry.” However, knowing in advance the apparently inevitable outcome, the reader is always in a position to second-guess the narrator’s optimism — and is simultaneously aware of the intense emotions that fuel the retelling. In the form of an almost uninterrupted memory stream, Cunningham convincingly depicts a period of swirling confusion, uncertainty and unexpected successes, of factional conflicts and improvised decision-making at all levels.

“After a month of unexpected freedom, we were finally faced with the sort of ironfisted response to peaceful political protest that I feared from the start
when I joined Bright, Lily, Jenny and friends as they stepped out of the gate of the university and marched through the streets of Beijing earlier in the
spring. Some sort of crackdown had been expected from the start; when that did not materialize, it became a game of testing limits. We broke the law
demonstrating on campus and nothing happened. We broke the law taking to the streets, day after day, for over a month and nothing happened. We took
over the Square and slept on the Square and nothing happened. Soon the numbers swelled to a million and then martial law was declared. We broke
martial law by talking to one another, activists and media alike. We broke martial law with our daily pilgrimages to the Square, activists and media
alike. The people were getting ideas; they started to act as if they owned the Square, and they guarded it with an almost proprietary sense of belonging.”

His sympathy for the students’ democratic (and deeply patriotic) cause is obvious, but day by day, as events unfold, he is forced to question their initial idealism. A few hours before the massacre, he instinctively joins a desperately improvised collective effort to block an armored personnel carrier by physically dragging a traffic dividing barrier into position, and joining those at the barricade:

“Before I knew what I was doing, the rock left my hand and joined the barrage of homely missiles hurled at the armored vehicle. In an instant too
ephemeral and fleeting for rational thought, I had been transformed into a member of a tribe, a complete and utter partisan for the movement.”

However, within minutes, he realizes that less than idealistic forces, presumably provocateurs, have entered the equation, and is forced to reevaluate:

“The May Fourth spirit was gone, replaced by something murky and malevolent. There was a new element I hadn’t noticed much of before,
young punks decidedly less than student-like in behavior and appearance. In the place of headbands and signed shirts with university pins they wore
cheap, ill-fitting polyester clothes and loose windbreakers. Under our lights, eyes gleaming with mischief, they brazenly revealed Molotov cocktails hidden under their jackets.”

He and the news crew strategically relocate to his temporarily-rented room at the Beijing Hotel, with a balcony affording a distant view of the Square, where they wait out the mayhem of the ensuing military assault on the student encampment, until daylight:

The unsettled dawn of June 4 brought not hope but more despair as the vestiges of a night of horror became evident. Blood on the street, bodies being rushed to the hospital on bikes and trishaws, civilians taunting soldiers, soldiers bullying civilians, buses burning, barricades smashed to bits under the weight of the mighty column of tanks that had passed in front of our hotel. The people’s square had been reduced to a military outpost, defended with long lines of helmeted soldiers, tanks, and guns.

This 25th anniversary edition of Tiananmen Moon is itself a valuable historical document, containing a new prologue that reviews post-crackdown developments, and the subsequent lives of many of the activists involved. The spirit of Tiananmen is not confined to China, or the late 80s. It is present anywhere that citizens take a stand to challenge a corrupt political status quo, by whatever means come to hand, and whatever the result.