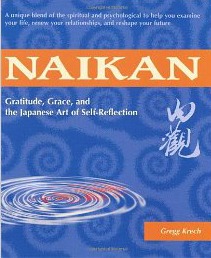 Years ago I sat watching a man being tried in court for armed robbery. Evidence was piling up against him. The judge called for a short recess, but asked the jury to remain seated. One juror, a middle-aged woman, pulled out a book to read. The title: I’m OK, You’re OK. Turning from her to the grim defendant, I pondered how simpleminded self-help books can be.

Not so with Naikan Gregg Krech’s book, like the profoundly reflective practice it details, only appears simple on the surface. Naikan, which means “introspection” in Japanese, actually implores us to look not merely within but beyond ourselves by routinely asking a set of three questions:

Unlike much of Western psychotherapy, Naikan, developed in the 1940s by Yoshimoto Ishin, a Pure Land Buddhist, is not concerned with examining the troubles others have caused us. As a species, the author explains, we are already so prone to finding fault (often self-deceptively) as to need no further training or encouragement. Moreover, dwelling upon tribulations only amplifies unhappiness. Consider how the cult of victimhood flourishes today. By contrast, Naikan argues that in placing our attention on blaming others or feeling self-pity, we are blinded to the plentiful everyday grace — life’s countless overlooked gifts — for which we would otherwise feel deeply grateful. Misdirecting our attention, we likewise ignore the guilt we must rightfully face as “a likely outcome of any effort to examine our lives.”

Naikan’s third question is emphasized most, yet there is no pre-ordained moral standard against which to measure our conduct. One simply considers ways one may have caused “trouble, harm, difficulty, suffering or inconvenience to others.”

With regular practice, Naikan’s trio of queries retrains the mind to open up to the world-as-it-is, an acute awareness that leads to a factual (if often less flattering) self-understanding and a far richer appreciation of the world around us. Instead of sinking into disappointment, resentment, or a sense of entitlement, we begin to perceive that “even within the context of our suffering, compassion, care and support are our close companions.” Contemplating how very much we receive, we are not only filled with gratitude, but begin to express it openly, and feel a sincere desire to give something back to the world.

Krech’s gift is an illuminating, enjoyable blend of observations, anecdotes, poetry, quotations and practical exercises. He has a rare talent for revealing how even everyday objects can teach us lessons of gratitude. Meditating on a pair of socks, Krech muses: “What are socks anyway? Are they anything less than the life efforts of the plants and people who made them? A cotton plant’s life is the source of these socks. Farmers, factory workers, delivery people, and others gave moments of their lives to make these socks. These socks are full of life! . . . It is true that they do not have a heartbeat. But they serve me just the same.”

For more on Japanese Psychology see The Todo Institute