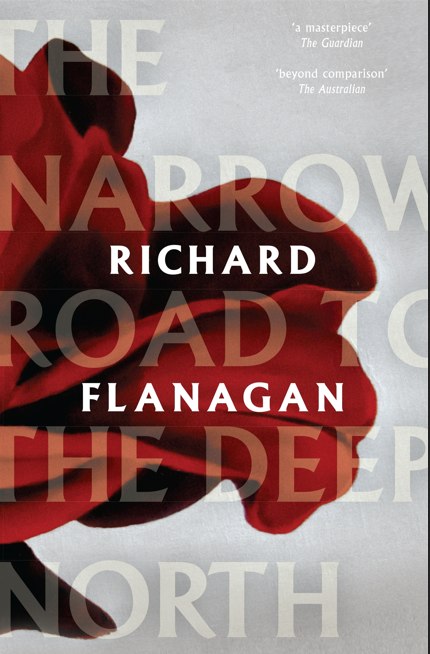 The Narrow Road to the Deep North
by Richard Flanagan

Richard Flanagan gained an international reputation for his orbis tertius novel Gould’s Book of Fish, a mythic revisualization of the early history of Van Diemen’s Land (Tasmania) as a penal colony, during its Black Wars which virtually eliminated the indigenous population. His most recent book, twelve years and five total rewrites in the making (including one in renga-style linked verse), is The Narrow Road to the Deep North. This title references the WW2 Thai-Burma “Death Railway,” on which his father worked as a POW forced-laborer, and of course the Japanese haiku poet Basho’s classic haibun travel journal.

Despite this deliberate juxtaposition of Japanese culture’s worst and best aspects, Flanagan takes pains to avoid presenting his protagonist, Dorrigo Evans, modeled on prison-camp doctor ‘Weary’ Dunlop, as a saint, and likewise avoids demonizing the POWs’ tormentors, the Japanese officers and guards. The novel hinges on Rashomon-like multiple takes on the hellish circumstances in which one individual prisoner was beaten to death — an effective writing strategy for coming to grips with the context of an almost incomprehensibly vast act of inhumanity: a war in which even the horror of the “Death Railway” was merely one episode.

Construction of the 415 km railroad began in June 1942, and was completed in October 1943, at an unthinkable cost in human lives. In an ABC-LNL interview, Flanagan commented: “More people died on the Death Railway than died at Hiroshima, than died in the Dresden fire-bombing. There is no moral equivalence in suffering and death, but it’s so terribly sad that this great crime against humanity is almost forgotten. …About a quarter of a million to 300,000 slave laborers took part. Estimates of the number of dead are vague because there are no real records other than those of the military services, but the number is somewhere between 100,000 and 200,000.”

It’s said that one person died for every wooden sleeper laid on the track. More than the number of words in this 480-page book… Of around 61,000 Allied prisoners who worked on the construction, close to 13,000 died. Even so, Archie Flanagan taught his sons not to hate, and even stated that he considered the prisoners lucky because “all we had to do was suffer” — unlike others whose wartime role was expressly to cause suffering.

According to Flanagan, his father spent the rest of his surprisingly long life distilling his experience, eliminating the poison of hate. Finally he remembered only the best in those who shared that hell. [KJ 56 featured “Return to Kanburi,” a Noh play by Sears Eldridge, based on the story of a British forced-laborer, Alan Lomax, who similarly resolved his experience — as also portrayed in the recent movie, The Railway Man].

While writing his book, Richard Flanagan visited Japan, even meeting some of the former guards who had perpetrated horrific violence at the camp. One, nicknamed “The Lizard,” had been sentenced to death after the war. His sentence was commuted; later he was released in an amnesty. Flanagan asked him to re-enact how he used to slap prisoners, and something happened then that he admits could never be credibly written into fiction: the room (and all of Tokyo) shook wildly under the impact of a 7.5–scale earthquake.

Clearly, the consequences of early-mid 20th century ultra-nationalist militarism still resound. Some opine that overseas, liberated from the rigorous social conventions of home, the Japanese army ran simply amok; others point to a harsh military culture that turned ordinary men into monsters. Treating non-Japanese as less than human resulted in the invaders themselves being characterized as inhuman. By 1945 the “civilized” world was ready to view the nuclear atrocities dealt to the civilian populations of Hiroshima and Nagasaki as a kind of primitive justice — likewise perhaps the post-war internment of approximately 600,000 Japanese soldiers of the defeated Kwantung Army in Manchuria for forced labor in Siberia (200,000 of whom worked on the Baikal-Amur railway line, built on permafrost). In total, 50,000 Japanese died during this detainment; the last survivors were repatriated in 1956. (In overall bigger picture perspective, the USSR made use of over four million POW forced laborers in total, after the loss of over 30 million of its citizens in WW2; estimates of total deaths worldwide throughout the war, including military and civilians, range from 60 to 85 million…)

Following Japan’s defeat, the Allies moved in to occupy Japan, with conflicting objectives and policies. Australia sought to maintain Commonwealth prestige, and to stake out political influence as a post-war player in Asia. The official aim was “to demilitarize and democratize” — but without fraternization. For Travels in Nuclear Sunshine*, Prof. Robin Gerster (from Australia’s Monash University, visiting professor in Australian Studies at the University of Tokyo 1996-98) researched the deployment of the British Commonwealth Occupation Force (BCOF), a total of 40,000 troops including British, Indians, Australians, and New Zealanders, focusing on the Australian contingent of around 12,000 men sent to Hiroshima Prefecture. (The Aussies were apparently delighted to find that a nearby brewery had survived unscathed, and that the A-bomb had left plenty of unobstructed land suitable for football; clean-up crews were not informed of the dangers of residual radioactivity in the debris).

Gerster too incorporates diverse first-hand accounts and points of view in building a comprehensive and critical account of the successive stages of occupation, from wary under-equipped arrival through the worst of opportunism, black-marketeering and other neo-colonial excesses, to gradual development of interest (among some, at least) in deeper aspects of Japan, during this first sustained encounter by Australians (representing a brash, recently-transplanted national identity) with a long-evolved Asian culture. Predictably, interactions between the troops and Japanese women are a recurrent topic. “Assisting the police with their investigation of the rape of a woman in her own home by an Australian soldier, Clifton is ‘amazed and shocked’ to be confronted by a tall, handsome ‘lad’ aged 21 or 22, such as one might see at home ‘in flannels on a cricket field or at tennis in any middle-class suburb; the pride of doting parents and the quarry of pretty women’.”

One story is particularly haunting. John Henderson, a young survivor of the “Death Railway,” had been shipped to Japan to work in a Kyushu coalmine where he was befriended by a guard. Liberated and repatriated, he later returned to Japan with the BCOF to reestablish contact, and in early 1948 married his friend’s sister in a clandestine Shinto ceremony — “a punishable breach of discipline.” White Australia’s immigration minister had proclaimed that out of consideration for relatives of those who had suffered at the hands of the Japanese “it would be the grossest act of public indecency to permit a Japanese of either sex to pollute Australian shores.” Within days Henderson was confined, distraught, in the brig of a homebound ship: his pregnant wife never saw him again. Other such couples suicided. However, by 1952 the prejudice had softened; some 650 Japanese war brides were eventually allowed into Australia. Conversely, some acculturated occupiers never left Japan.

History is essentially experienced by individuals, not nations. Individuals have the capacity to process their experience, and learn from it; nations, it seems, not so much. Writers and scholars such as Flanagan and Gerster play a vital and often-underappreciated role in ensuring that what has been learned is not forgotten.

* “Travels in Nuclear Sunshine” refers to an episode in 1946, when the US General Courtney Whitney delivered the hastily written new US-composed Japanese Constitution to the Japanese cabinet. “The Americans then repaired to the gardens of the foreign minister’s residence, basking in their serenity. … After about an hour, one of the flustered Japanese appeared in the garden, apologizing for keeping the visitors waiting. ‘Not at all,’ said Whitney. ‘We have been enjoying your nuclear sunshine.’”