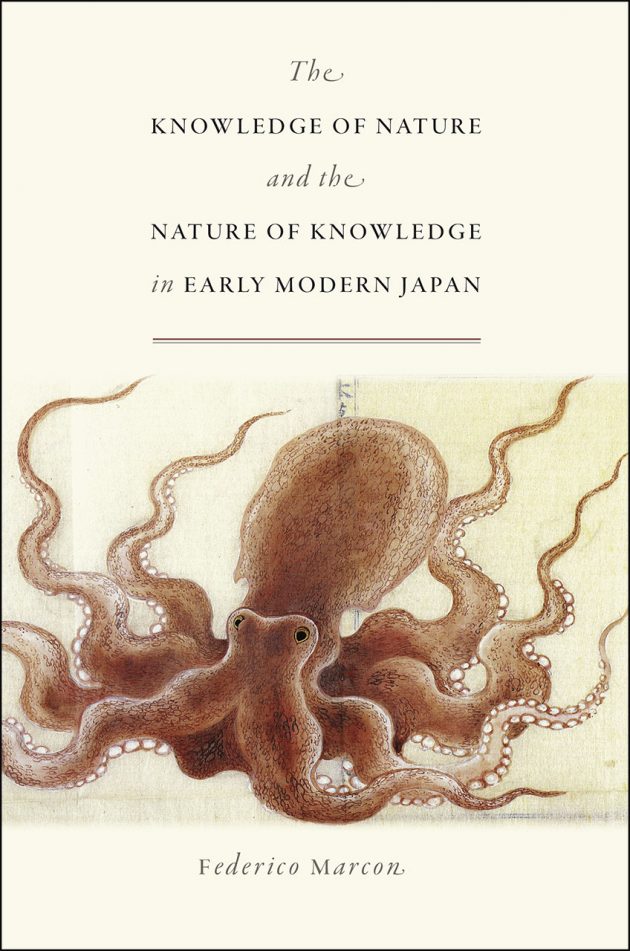 The Knowledge of Nature and the Nature of Knowledge in Early Modern Japan by Federico Marcon. Chicago: University of Chicago Press, 392 pp., $45.00 (cloth).

The inhabitants of ancient Japan had no word for what we call “nature,” but they had a precise mental map of it. Nature was a wild and alien realm beyond the border of the village, inhabited by magical foxes, water goblins, and long-nosed demons, as well as by the kami of Shinto religion. Humans were not welcome in these sacred forests; if they wanted to cut the trees or kill the animals within them, they had to first pacify the spirits of nature by conducting religious rituals. The pre-modern Japanese were not, of course, innocent of environmental exploitation—they razed many mountainsides and turned many fields after reciting the requisite prayers—but they understood their relationship to the environment in a radically different way than modern Japanese do. Inevitably, different understandings lead to different actions. When spirituality gave way to science starting in the 1600s, it became possible to plunder the natural world in a more commercialized and methodical manner than ever before.

The story of how that transformation occurred unfolds in historian Federico Marcon’s new book, The Knowledge of Nature and the Nature of Knowledge in Early Modern Japan. Marcon convincingly counters the idea that traditional worldviews crumbled only after Western science flooded Japan following the Meiji Restoration of 1868. Instead, he traces the emergence of the field of natural history to the early Edo period, and carefully documents how it scraped away nature’s sacred patina over the next two-and-a-half centuries. Nature study was first the pursuit of independent scholars, then a state-sponsored project, and finally a popular pastime for the masses. By the early 1800s, Marcon writes, “the natural environment was explicitly conceptualized as a limitless reservoir of resources for the prosperity of the state.”  Japan, in other words, had engineered its own disenchantment.

The man who sparked this change was a sixteenth-century Chinese doctor and naturalist named Li Shizhen (this pairing of occupations was not so unusual in the days when medicine was derived directly from plants and animals). Li spent three decades traveling to the drug-producing provinces of the Ming Empire and writing an encyclopedia of the pharmacological substances he found there, called the Bencau gangmu. Unfortunately, Marcon does not delve into the particulars of Li’s journey through China. Here and elsewhere, he seems more interested in extracting meaning from history than in recounting the quirky tales that lie tantalizingly beneath the surface of his analysis—a preference that makes his book quite a bit drier than it might otherwise have been.

The Bencau gangmu was published in 1596 and arrived in Japan about a decade later, when retired shogun Tokugawa Ieyasu asked his advisor Hayashi Razan to bring him a copy of it. Razan not only did that, but also compiled a digest version listing the Chinese encyclopedia entries alongside their Japanese translations. This, according to Marcon, marked the beginning of natural history research in Japan. A spate of revisions and reprints followed. By the 1700s, naturalists were tramping to the far corners of Japan to draw up lists of native plants and animals for publication in original encyclopedias (beautiful illustrations extracted from these publications are a highlight of Marcon’s book, although they are unfortunately not reproduced in color). As time went on, the government began paying for these expeditions, perhaps because leaders realized that knowledge of “natural resources” could enhance their power and wealth.  Among the more colorful examples of crossover between scholarly study and political service was Uemura Masakatsu (known as Saheiji), who used his 86 expeditions to collect not only medicinal herbs, but also the state secrets of outlying provinces, which he reported back to the capital.

The late Edo era was the “heyday period” of natural history. Commoners played games to see who could name the most plants, teahouses displayed exotic animals and other curiosities, gardens flourished, and men gathered in private salons to discuss the natural world.  Owning nature—or even knowing about it—“came to represent a powerful source of prestige,” Marcon writes. Creatures including a huge blue whale, “an octopus so large that it occupied a three-tatami room,” and a flock of European sheep were paraded through city streets. The flurry of exhibitions peaked in 1762 with a Tokyo show featuring 1,300 rare plants, animals, and minerals from throughout Japan.

The significance of all this, Marcon argues, is that it changed the way people related to nature. As scholars penetrated the furthest reaches of wilderness, they demystified the sacred realm beyond the edge of the village. When they catalogued and classified what they found there, they transformed individual plants and animals into examples of constructed categories called species. And when ordinary people began treating the natural world as a source of entertainment, they furthered its objectification. Through this process, Marcon writes, “plants and animals became a particular kind of material and intellectual commodity: they could be accumulated and collected, ordered and exchanged, transformed and deconstructed, and displaced and experimented with.” They were now ready to take their place in Japan’s burgeoning industrial economy.