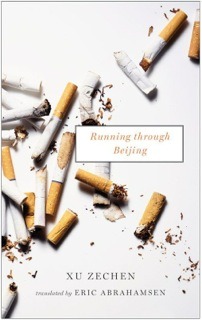 In China’s major cities there is an elite one percent or so that drive nice cars, eat in nice restaurants, and generally live pleasant lives. They do so thanks in large part to the ninety-nine percent, among whom are the migrants from the country who’ve moved to cities in search of their big breaks, and who are willing to work two, three, four jobs or more to survive and maybe, just maybe, realize the dreams that kept them awake back on the farm.

Of course some of these new urbanites turn to petty crime: hawking pirated DVDs and fake IDs, theft, prostitution. Xu Zechen’s novel, Running Through Beijing, is a sympathetic look at this hustling underclass, and follows one of them, Dunhuang, on his Beijing rounds selling DVDs, dodging cops, and navigating relationships with women who are similarly engaged. The novel, like its protagonist, runs though Beijing, and leaves in its wake a tale that can only be called picaresque, and that makes us wonder why that fictional template is not more often used. Different times call for different literary forms, and in an age during which more and more people are leaving the security and poverty of the country for the insecurity and poverty—but also possibility—of the city one suspects we will see more picaros—engaging underclass rogues—in the novels that define our time.

Posted in Reviews and tagged China economy, Running in Beijing