The Science of Satoyama 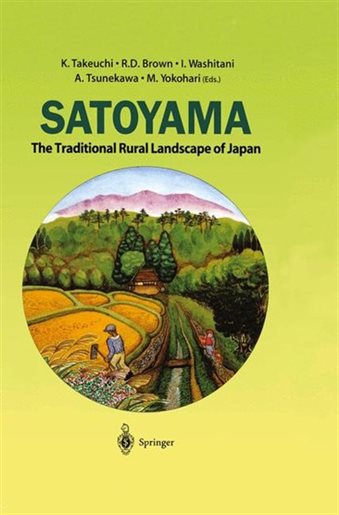 Japan’s traditional rural landscape, comprised of villages bordered by fields and tended woodlands, is known as “satoyama.” A volume such as this one, although a bit on the dry side, can motivate the adventurous reader to further discover these rich socio-environmental cultures. Drawing on science and sociology, the authors state that deeply-held cultural patterns in the fabric of traditional life in the Japanese countryside have been disintegrating, and chronicle recent social movements to reverse this trend and save satoyama.

The facts presented in the text seem more those of a landscape architect concerned primarily with visual design than those which a forester, concerned with productivity and sustainability, would find most important. Poetic images of cherry blossoms, maple leaves and other symbols of the changing seasons in a natural environment, for example, are invoked throughout the text, as are references to volunteer groups beautifying the landscape. Precise estimates of satoyama productivity, on the other hand, are few and far between, although the authors do make clear throughout the text that Japan once had healthy community-based “commons” that were jointly and sustainably administered by village elders.

Kazuhiko Takeuchi describes satoyama spaces evolving over 30 generations “as part of village culture throughout Japan,” and even today satoyama are “estimated at 1/3 of the total forest land” of Japan. They remain under threat, however, and the book at hand lacks large-scale suggestions for future actions the government might take to preserve remaining satoyama, or better, to increase the amount of satoyama land. The closest it comes are anecdotes about past governmental and community-organized programs.

Various authors devote a good deal of attention to the “second wave satoyama” that appeared in the 1970’s at urban-satoyama interfaces. They concentrate on social phenomena surrounding the re-awakening of Japanese collective consciousness to the importance of well-managed rural environments and to the aesthetic beauty that has defined Japanese culture. “Environmental activists, local PTA’s and city dwellers,” the authors note, “began actions in the early 70s to prompt local governments to support restoration projects and environmental laws; more recently, newly-formed NPO’s have joined with government agencies and local village elders to work on local restoration projects.”

Some small-scale success stories are highlighted in the book, all brought about by the efforts of educational institutions and government researchers. The modern satoyama movement in Japan seeks to connect environmental education and social networking, to focus volunteerism on helping to revitalize degraded forests, and to encourage the creation of park-like areas near cities where people can become part of the social movement to save the environment. Human beings, the current satoyama movement acknowledges, are central to the picture; it is essential for restoration work to involve the communities in which it is to take place.

This book may inspire environmental groups both locally and worldwide to analyze forestry conservation in new ways. Viewing them through the lens of current conservation practices one might reject the traditional Japanese forestry model: Japanese forests are clearly not as healthy as they should be. However, some international experts are embracing the concepts put forth in the Japanese government’s Autonomous Environmental Planning Law of 1999, which urges local authorities to “go back to the basics and re-examine how to appropriately manage and use the woodland and agricultural lands, while improving the health of local economies and minimizing impacts on the natural environments.” These principles reverse nationally-administered agricultural programs that focused on field crops without taking into consideration the wider satoyama watershed component. If implemented, not only in Japan, but in other countries, these principles would help to minimize destructive human activities and provide a means to stimulate rural economies.

Late in the book the authors describe some potential ways to recharge rural economies by fostering local micro-industries. These would be modeled on components of traditional local satoyama economies that were sustainable for centuries. The book’s intention, though, is not to suggest individual satoyama designs. Rather, used as a broad guide to policy, it aims to establish an atmosphere conducive to change in long-held political attitudes regarding forestry practices.

One way the authors approach the crucial issue of the cost of maintaining a neatly coppiced forest is to link the green harvest with rural energy independence. Methane digesters, co-generation power plants and other technologies are discussed as potential generators of revenue. “Japan’s satoyama forests are estimated to contain 6,300,000,000 cubic meters of forest biomass,” the authors note,” enough to provide 6,000,000 households with power.” In the book’s last chapter the authors cite a report from the Forest Bio-mass Research Association (APAST) that focuses on average yearly harvest capacities. These figures bring the economic potential into clearer focus: “1000 tons of yearly harvest capacity . . . (or 15 forested hectares) would provide 500 households with electricity and modern cogeneration furnaces would collect enough energy for local home heating equal to 450kW.” Further, “one long-term sustainable feature shows local production can eliminate 1300t of CO2 emissions and the importation of 450kL of heavy oil while providing 10-12 local part-time jobs.” The potential of satoyama to save rural areas is tremendous.

One comes away from the reading with questions:

• What is the future of agriculture in Japan without innovative forest practices?

• How will Japan’s past and future policy toward satoyama influence the preservation of watersheds worldwide?

• How can local watershed preservation, biodiversity and cereal production be seen as more interrelated, and as such, deserving of special government support?