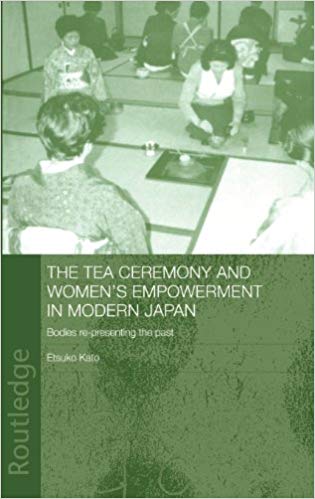 The Tea Ceremony and Women’s Empowerment in Modern Japan: Bodies Re-presenting the Past by Etsuko Kato, New York: Routledge Curzon 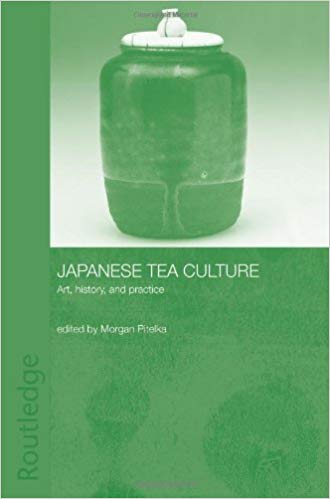 Coffee–table books about tea tend to offer pristine views of paradise and bowls of world peace. Page after page of steamy shadows and shadowy steam, dewy landscapes fashioned by gods with impeccable taste, a solitary red maple leaf or cherry blossom petal captured mid-fall, fresh green tea froth (or sludge, depending upon your “school”) glaring up through ceramic ensos like the third eye of the Wizard of Oz. Enough!

For a breath of fresh wind in the pines, two books from the scholastic press of Routledge Curzon are recommended for those with a serious inquiry into the world and way, practice and place of the tea ritual in Japanese culture: The Tea Ceremony and Women’s Empowerment in Modern Japan: Bodies Re-presenting the Past, a dissertation by Etsuko Kato, and Japanese Tea Culture: Art, History and Practice, a collection of sometimes quirky but scholarly essays edited by Morgan Pitelka.

“We participate in a tradition of commentary and critique that extends back to the sixteenth century … In writing, we participate in the ongoing cultural production of tea,” states editor Morgan Pitelka, editor of the first book mentioned. One thing for sure is that the do (way) of cha, like the yu (hot water) for cha, is not a catalyst strictly speaking. It has changed in the process of changing culture.

Kato’s book illuminated and clarified many of my own observations as a practitioner of chanoyu for 24 years, mostly in the company of Nisei, Sansei and recent Ise expats living in Southern California. She presents a thoughtful critique from behind-the-scenes of the growth and development of chanoyu as enterprise for women in particular.

On the other hand, Pitelka, a professor of Japanese culture with an expertise in ceramics for tea practice, is the “outsider.” His contributors look at tea through a diverse set of filters, from social and art historians, current and former functionaries of tea schools, museum curators and an academic anthropologist. He promises that “This book is in no way representative of a new school or movement of tea scholarship.” Neither is it another gospel patronized by or in homage to the current chanoyu “establishment”.

Each book has a section that addresses the sanctification of Sen no Rikyu, chanoyu’s great tea ancestor and in whose name we study and practice the craft / art. The fact of Rikyu’s imprint on tea since the mid 16th Century, and through him, the likes of scholar-priest Eisai, Murata Shako Takeno Joo, Kobori Enshu and his contemporary Furuta Oribe and progeny are admired, is not in question, but his “word” has become legendary and subject to commentary, much like what Talmud is to Torah.

In Pitelka’s book the essay “Rikyu Has Left the Tea Room”, tackles Rikyu’s star-power through analysis of three modern biographical films. Kato, on the other hand, looks at the commodification of the Rikyu mythology and the bloodline of the iemoto system (hereditary lineages producing quasi-monopolistic authorities).

If we were to take Rikyu literally, we would we only need to acquire tea, carry water, chop wood, make a fire, boil water and knead the mixture. By alchemical extension, we would convert history into tradition, tradition into spirituality, spiritually into social propriety, social propriety into intellectual expose.

Both books also discuss in detail how chanoyu’s economic, social and cultural “capital” have developed and been manipulated to suit the needs the tea establishment. Tea as enterprise impacted clusters of complementary professionals (e.g. ceramic craftspeople and merchants) who were able to make a living sharing the practice, even if only limitedly, to a willing and impressionable populace.

If there was such a cultural complex as chanoyu a half century ago in the USA, it would have been studied as home economics. To elevate it to the status it enjoys in Japan would require patronage by someone as pop culturally powerful as Martha Stewart or Oprah Winfrey. This is clear from Kato’s feminist approach. For example she takes us to a Japanese department store “art” gallery exhibition entitled “Saint Rikyu”. More than just “big box” stores of today, in Japan they are to women in the tea world the equivalent of men’s social clubs: natural, “safe” places that present chanoyu as “high” art and socially acceptable places for women to gather in public outside the home and tea room. I was told by a tea informant that Japanese women were more liable to travel independently of their husbands and with their female friends to national or international destinations following their grand master teachers around in the name of tea. The delegations of dozens of middle age women chajins who have visited Los Angeles over the years is proof.

A significant portion of her writing covers the practice of temae, the set of choreographed movements comprising the modular elements of the longer, more “formal” chaji tea gathering. The “birth of tea as “sogo-bunka” discourse, the “cultural synthesis” or compendium of every traditional Japanese cultural “art” form has important implications. She also distinguishes tea benkyo (study) of tea as geijutsu (artistic form) from saho(“etiquette or good manners with emphasis on mind”). Given the emphasis on “bodies” in the subtitle, I did expect a deeper discussion by Kato about body image and the physicality of practice. She does mention wearing of kimono but doesn’t mention anything about the painful practice of sitting seiza.

Both Pitelka and Kato utilize chanoyu as a portal, rather than as metaphor for further social and cultural studies. She takes the tack of feminist theory and looks at the lives of women in the post-Pacific War period, their achievements in higher education, marriage-ability, vocation / avocations, etc. Chanoyu practice is regarded with high status among all cultural elites in Japan, and a woman’s top rank could even place her in some circles above her corporate executive husband.

One of Pitelka’s authors presents how 20th Century excavations on Sanjo-dori in Kyoto at known sites of ceramics merchants’ shops are revealing how Momoyama folks shopped for “pots for tea”, what types and styles of goods were sold during that period.

Pitelka’s own writing examine the Edosenke school’s “warrior tea”, prominent in the late Tokugawa period, and the often-marginalized Sen Koshin Sosa, the founder of Omotesenke tea school. Another of his contributors offers insight into the early karamono (Chinese objects) utensils as they made the transition from use in sencha (leaf tea) ceremonies to matcha (powdered tea). Two other essays explore how chanoyu utensils were valued by warlords’ as battle spoils. In some ways chanoyu seems a bit like a Mata Hari, something that could stop the boys in their tracks and make them find true happiness.

I have always wondered whether there was any tea practice among Japanese-Americans relegated to remote concentration camps and the chado studies of my own sensei who spent that period in Japan at the home of the XIV Urasenke grandmaster. I cannot imagine that making tea was as forbidden as was the practice kyudo or kendo, Zen archery and sword, respectively for two reasons. First, neither tea ladle nor scoop could be mistaken for a weapon; although they are handled with those in mind. Secondly, no one would consider a female master chajin’s making a bowl of tea a threat to national security.