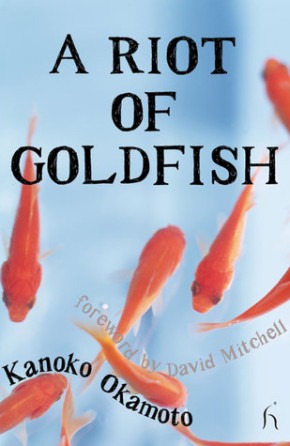 The two novellas in this collection – “A Riot of Goldfish” and “The Food Demon” – portray artists alienated from society, from love, and from reality. Both Mataichi in his obsession with breeding the perfect goldfish, and Besshiro in his compulsion to cook the best possible meal, amplify rather than sublimate their impulses at the expense of social interaction. Okamoto’s fringe artists are unable to see beyond their art, unable to realize that what they aspire to is nothing, is emptiness, is sensation rather than experience, a process of always becoming but never being. That Okamoto herself was a scholar of both Christianity and Buddhism is evident in her almost Kierkegaardian triumvirate of aesthetical-ethical-religious preoccupations; but Mataichi and Besshiro invert Kierkegaard’s terms and renounce “universal ethical Law” for “aesthetic content” and, as Zizek argues in Interrogating the Real about Wagner’s Tristan und Isolde, both Mataichi and Besshiro embody the “Aesthetic attitude (in the Kierkegaardian sense of the term)” and so “refusing to compromise one’s desires, one goes to the end and willingly embraces death.”

This alienation, this refusal to participate in societal traditions, the unyielding determination to create perfection out of failure and personal neglect is both a secular and a spiritual drive, a means of rising above the everyday to distil a pure essence of creation. The novellas’ topographies are Tokyo and Kyoto, centres of Japanese modernism and urban growth, both are cityscapes overburdened with meaning and yet devoid of it for their populaces, places in which reality is always on the brink of being real, where tradition and innovation clash in literature, art, music, and architecture. Mataichi and Besshiro, both excluded from or unable to penetrate legitimate culture or break social constraints, believe that the artist exists outside of hierarchical society, that art transcends caste. There is no egalitarian reasoning here, purely a stance of the outcast superior to society, a stand taken by arch-modernists T. S. Eliot, F. T. Marinetti, and Ezra Pound. Mataichi embodies Eliot’s statement that “The more perfect the artist, the more completely separate in him will be the man who suffers and the mind which creates,” in his failed pursuit of his patron’s daughter, Masako, and his extreme goldfish fetishism; whereas Besshiro’s desire to perfect his cooking “is not a turning loose of emotion; it is not an expression of the personality, but an escape from personality.” Besshiro and Mataichi’s attempts to express themselves through their art transforms them into humourless, lonely, and bitter men – the only expression of their being is their failed attempts to create perfection. 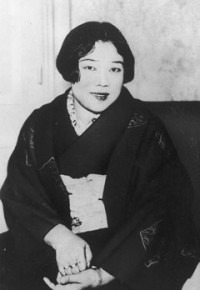 Between 1930 and 1932, Kanoko Okamoto travelled to the Paris of Gertrude Stein and Jean Cocteau, the Berlin of Alfred Döblin and Joseph Roth, the London of T. S. Eliot and Virginia Woolf, and the New York of F. Scott Fitzgerald and Dorothy Parker; these and other second-generation modernists directly and indirectly informed her writing. On her return to Japan, Okamoto began to write prose of lyrical and, at times, hyperbolic intensity, exploring modernist concepts of the artist and/or the individual in collision with society, spiritual alienation, and the moral, ethical, and political dilemma of the abandonment of tradition. Donald Keene labelled Kanoko Okamoto “A minor, but unforgettable writer,” and the texts suffer from a not fully assimilated synthesis of Virginia Woolf’s psychoanalytic detailing, Juni’chirō Tanizaki’s obsessive-compulsive sensualism, and Ryūnosuke Akutagawa’s late autobiographic work. Yet, they have moments and passages of tense and intense beauty and liberating female sexuality, residing somewhere between pessimism, eroticism, and narcissistic nihilism. Expertly translated by J. Keith Vincent and strikingly packaged by Hesperus, A Riot of Goldfish provides a stimulating introduction to the works of this trail-blazing Japanese modernist and feminist.