The Crisis of Japanese Democracy

Brother man, what can I do for you to ease the frustration deep inside of you? Cause everybody knows violence is not the way. Love is the only answer, it’s the only way.
(From the song “Bully,” by Omar Lye-Fook)

In the late 1940s, in the aftermath of the Japanese surrender, the Allied powers attempted to create lasting conditions to prevent the Japanese government from leading its people into warfare. Towards the achievement of this goal, a new Constitution was created. Most vital to its transformations were Article 9, which declared that Japanese would renounce war, and Article 11, which guaranteed human rights for all Japanese citizens, thus laying the foundations for democratic government. The basic and ongoing challenge to any democracy is that its citizens need to have free and open access to unbiased information. They must further be presented with alternative domestic viewpoints and varying historical narratives as well as being engaged in critical dialogue with the larger world beyond. Above all, citizens need to cultivate critical thinking skills in order to make intelligent choices and decisions.

But even semi-democratic nations can be fatally misled by politicians with their own hidden agendas. I recall one of my history professors at Princeton University lamenting, “A few profoundly dangerous and self-centered men in power can spoil everything.” The 20th century abounds in examples of inflexible leaders who turned the tide of history. Abe Shinzo poses as a peace-loving prime minister, both gentlemanly and courteous, even by the exacting standards of Japanese society. But if one looks beyond his meek and ingratiating demeanor into his family background, Abe’s dangerous brand of ethnocentrism comes to the surface. Rather than fairly conveying political news, the Japanese media complicitly covers up his meetings with ultra-nationalist groups and his past statements condoning the development of nuclear weapons within Japan. Despite the ongoing nuclear pollution that the Fukushima disaster is causing, Abe misleads the public by insisting that relying on nuclear power is economically necessary and presents no unsurmountable dangers. In fact, in a very recent parliamentary debate, Yamai Kazunori questioned Abe as to whether the prime minister’s confidence in nuclear power wasn’t directly related to the fact that residual fuel could be used to develop a nuclear arsenal. 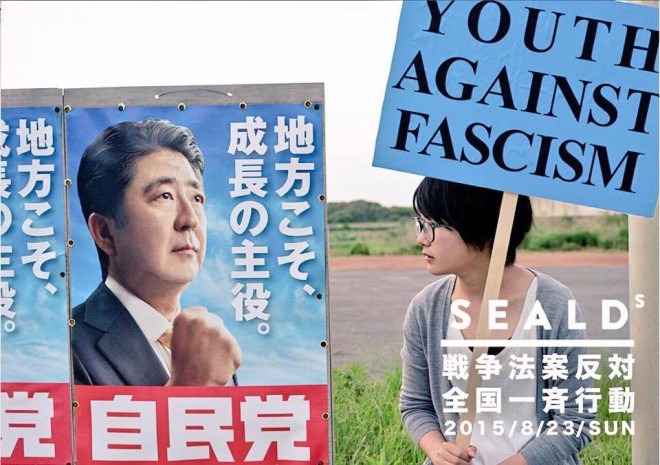 Last year the national broadcaster NHK and local newspapers focused on a man who poured gasoline on himself and then set himself on fire to protest the Secrecy Protection Act, which increased governmental ability to monitor citizens. A bystander who witnessed his act recalled the man saying, “Japan used to be a country that really valued peace.” For this overwrought man living in a country where the state paranoically monitors its citizens and curtails their freedom of speech, the future offered little hope. 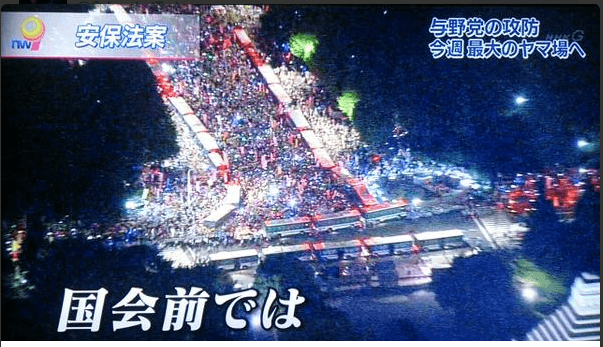 Ever since Abe determined to force the controversial security bill through the Diet, legalizing Japanese military action overseas in aid of an ally, even if Japan itself is not under threat (in direct contradiction of the Japanese Constitution’s Article 9), continual protests were held outside the parliamentary building on a scale that has not been seen since Abe’s grandfather, Kishi Nobusuke, strengthened the U.S.-Japan Security Alliance in 1960. Pro-LDP media have tried to play down the scale of the protests, but clashes between students and the police, reported on social media, indicate that they could potentially become riotous.

There are several reasons why the LDP forced the ratification of the security bill despite notable grassroots protests. The first and foremost reason is that the prime minister has a strong and loyal support base outside urban centers. Abe’s overall approval ratings averaged a little below forty percent, even after the security bill was forced through the Diet. This is a largely agrarian support base which includes tobacco and rice farmers as well as other rural industries that do not represent the nation as a whole. There is also disproportional representation for rural voters in comparison with their urban counterparts. The second reason why Abe remains confident is the backing of the U.S. military establishment which aims for Japan to shoulder some of its defense burdens.

The LDP plans to move on to constitutional amendment of Article 9 quickly since the upcoming election may produce unfavorable results. Revoking Article 9 and amending Article 11, which guarantees human rights, are high priorities on the Abe cabinet’s agenda. The draft that the LDP prepared previously reinterpreted the human rights clause by emphasizing citizens’ duties and obligations to the state. Abe’s historical revisionism is emboldening nationalist historians, who are now arguing that the entire post-war Constitution was forced on the Japanese people.

In addition to these extremist views, books that question the extent of the Nanjing Massacre and the Bataan Death March are gaining popularity in Japan. Right wing groups exert a considerable amount of pressure on those who expose Japanese wartime atrocities. In fact, it was Abe himself who created the research committee which argued that there is no evidence to prove that the Japanese colonial regime coerced the so-called “comfort women” into serving the Japanese military. Western, Chinese and Korean historians have provided hundreds of testimonies showing that indeed there was both torture and coercion, but the Japanese Army burned the most inconvenient evidence so that these matters cannot be easily corroborated. A visit to any major bookstore in Tokyo or Osaka will dismay non-Japanese residents, since book titles such as日本軍は本当に「残虐」だったのか (Was the Japanese Military Really Brutal During WWII?) and others are among the best-sellers.

Responsibility of the public’s ignorance of the Japanese military’s brutality lies at the doorstep of the Ministry of Education, a loyal LDP supporter. The Ministry is infamous for editing out war crimes in school textbooks and expunging the war period from secondary school curriculums. A week before the problematic security bill was forced through the Diet, the Ministry of Education confirmed its plan to eliminate Liberal Arts programs altogether from Japanese national universities. The rationale is that these subjects do not profit the nation economically. However, critical thinking is the hallmark of disciplines such as history, philosophy and political science and is essential to any country hoping to maintain democratic freedom and human rights. Needless to say, Abe has repeatedly indicated that he is not fond of intellectuals. However, a populace that is ignorant of its country’s wartime brutality as well as its colonization and invasion of China and Korea would be far easier to manipulate.

In numerous interviews, the prime minister has stated that more than anyone he respects his grandfather, Kishi Nobusuke, who before being “rehabilitated” and elected prime minister, had been classified as an A-Class War Criminal for his actions in Manchuria, where the Japanese Army carried out its most brutal Three Alls Campaign (kill all, burn all, loot all) not to mention the infamous live human medical experiments of Unit 731.

By strengthening Japan’s military alliance with the United States, Abe hopes to check the rising power of China. “Now Japan will be safe for the next fifty years,” Abe has proclaimed, but political analysts point out that there is no guarantee that the U.S. will back Japan when the Chinese G.D.P. overtakes that of the U.S. and China closes the gap on military technology. The bitter experiences of the Korean War are etched into the minds of former U.S. generals. The United States cannot afford for Japan to provoke the powerful Chinese military. 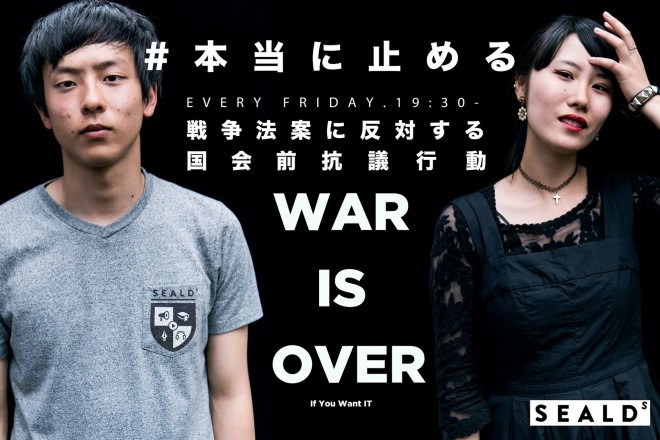 Naturally, these developments cannot be blamed on the LDP and Abe alone. Japanese citizens are responsible for apathetically electing the same party for nearly seventy years, or simply not bothering to vote. Liberal democracy cannot effectively function if the political actors and their agendas are always the same. In Japan, new parties and coalitions appear from time to time, but they are led by individuals who emulate the LDP or propose even more extremist platforms. The former Mayor of Osaka, Hashimoto Toru, for example, has stated that he plans to form a new party, but considering his father’s gangster past and his own problematic statements about “comfort women,” his party may take the nation even further to the right, forming a dangerous war-hawk coalition with the LDP. In fact, Abe and Hashimoto have already met privately and have begun to discuss various possibilities.

Can Abe’s vaguely-defined and essentially nostalgic vision of a “Beautiful Japan” really create peace and security in East Asia? (It’s not clear whether he is referring to the 1980s, when Japan was at the height of its economic power, or talking about his grandfather’s lifetime when Japan was an imperial power). Unless historical revisionism is halted, future generations may not understand why Japan’s neighbors harbor such strong resentments toward Japan. On the other hand, new youth movements as well as groups of concerned mothers have hit the streets to speak out against remilitarization and oligarchic authoritarianism. Revitalized by grassroots protestors, some aged Japanese veterans of World War II are finally coming forward to passionately share their bitter wartime experiences. For the first time in many decades, formerly apolitical youth are realizing that social protest is a fundamental right of liberal democracy. A high school student at a protest gathering recently told a reporter, “When I first started going, I was particularly impressed by the speeches. I felt like I was learning things that filled a gap in my education.”

Members of Students Emergency Action for Liberal Democracy (SEALDs) succeeded spectacularly in mobilizing and energizing massive protest rallies against the security bill, saying “This is what democracy looks like.” Their further aim, looking towards the 2016 elections, is to bring together “all the liberals across the conventional political spectrum to form a united front to protect Japan’s tradition of liberal democracy”—on the basis of liberal values including “constitutionalism, social security and peace diplomacy.” There is no little irony in the fact that Abe’s right-wing conservative ruling party, which such a coalition could sweep from power, calls itself the “Liberal Democratic Party.”

Jonathan Augustine has spent most of his life in Asia since the 1970s where he is active in theatrical projects and volunteer activities. His academic and fictional works include Shadows of the Atomic Bomb 『原爆の影』(2013), Karakuchi Onna 『辛口女』(2010), Land of the Immortals 『仙人之谷』(2005) and Buddhist Hagiography in Early Japan(2005).