Icing on the Cake: A Week in the Life of a Tibetan Sand Mandala

There is a classic “Pink Panther” television cartoon in which PP and his Anonymous Nemesis are chasing each other through a decidedly two-dimensional locale. All of a sudden, clearly overwhelmed, PP skids to a halt (sound: tire skidding), produces a piece of chalk from a mysterious pocket in his hide (turns to audience for acknowledgement of his cunning) and hurriedly draws a picture of a “door” (wood, with handle) “on” the vertical plane in front of him. He then opens the door and jumps “in”, only to be followed by his pursuer. The door is slammed shut by a mysterious wind (sound: bang) and a commotion ensues (image: door “dancing” and bulging; sound: banging). After a beat and sudden stillness, the door “opens” and PP jumps out, produces an eraser from the “pocket” and erases the door. End of problem. End of story.

I WAS REMINDED of that cartoon when a baker’s dozen of Yellow Hat Tibetan Buddhist monks from the Dreprung Loseling Monastery (now in exile in India) set up shop for a week in a tiny concrete vault of a gallery at the Santa Monica (California) Museum of Art to “perform” their sacred sand mandala of Amitayus Buddha (Cycle of Boundless Healing) and attendant music and dance rituals.

It would be reasonable to assume that during the almost week-long endeavor, most of the passers-by the usual flock of aesthetes circumambulating the gallery complex in search of the latest and hippest believed that they were witnessing the “creation” of art. There was much chatter about color mixing, design and technique. Others, more tuned into the Buddhism scene, appropriately associated the monks’ work as a spiritual practice, an invocation of the awesome holy, healing icon.

Bottom line, however, few people actually devoted much time to “attend” the painstaking site-specific work-in-progress. From first slap of the chalked plumb lines on a table-top the size of half-court ping pong, to the jiggling out of the last grains of powdered colored minerals through the hand-held copper and brass cone dispensers, the work on the mandala seemed charged by nothing less than quiet focus which fused time and space into a medium certainly not available in your average art supply store.

Every day, a team of three to four monks, each with a dust mask covering nose and mouth to prevent an accidental breath from destroying their efforts, drew the exquisitely complex image, from memory without the benefit of even a sketch. (To mess it up would accumulate bad karma for the monks, the translator explained.) It was the ultimate birthday cake icing, or one of those exquisite large, hard sugar Easter eggs with a peephole to view a pastoral diorama inside. The mandala grew up and out and somehow down and into and beyond, welcoming the imagination to enter the mystery and mastery. The deities had a fine home for a short while.

Those of us who did invest enough time to witness the mandala’s growth were well rewarded with the “construction” of a wondrous labrynthian palace replete with sparkling fields of bold color adorned with tiny carriages, wheels, fire, clouds, flowers, dragons, lions and other sacred symbols. As the image evolved outward from the enshrined deity in the center it took on different personalities, whether due to the artful composition or its inherent power. For me their efforts produced a many-chambered organ like a heart or brain. I found myself entering a cave-like space; one could almost feel the pulsing vitality.

Unlike most of the artifacts and artifice in other galleries of the arts complex, the mandala’s “creation” wasn’t the point of the effort of its manufacturers; the day after its being “finished,” the image was subsequently, systematically and ceremonially “destroyed” by its creators.

“Is that all there is … if that’s all there is, my friend, then let’s keep dancing.
Let’s break out the booze, and have a ball. If that’s all, there is.”

With great fanfare from drums, cymbals, horns and bells, on that final day the head lama — much like a pizza parlor chef — ritually sliced up the delicate image with a small metal lightening bolt vajra; then an assistant swept up the component grains into a blur the color of all colors and poured the gumbo into a container. It was so compelling a demonstration of birth and death that the distinction between creation and destruction began to take on the color of that blur. Onlookers’ faces went from disbelief to horror. How could they mess it up after all that they have done to create it? What was the point of making the art? It defied one’s sense of logic. Perhaps that was the point.
The monks and their audience conveyed the vessel and its precious contents by car caravan to the Santa Monica Pier, where, to deep-throated Tibetan chanting and instrumental accompaniment, and much to the amusement of an unsuspecting sea lion that poked its head up out of the surf below the deck, the art was committed to the cold Pacific waters to extend its healing energy to the world.

It’s often said that a piece of music or a movie is successful if the audience leaves humming or whistling the theme. But here we had nothing left, like that delicious birthday cake. There was no “whew,” no “finally,” no “well, that’s over,” no remorse or postpartum blues from the monks, only the onlookers. There was no accumulation, which was ironic as accumulation was one of the monks’ main preoccupations “off stage.”

I will admit to not being initially concerned about the more philosophical issues when I volunteered to provide home hospitality to four of the lamas; I was more into the mundane issues of accommodations, breakfast, transportation, laundry and the like.

Having guests from abroad is one thing. Having guests who regularly cross bridges of the great temporal over-yonder as naturally as they cross national boundaries is completely another. Throughout their stay, objects from other time periods were coming in and going out of frame, much like the mandala itself.

I was assigned “my” lamas: three berobed bald Tibetans in their late 20s and early 30s, two of whom were born in exile in India, one in Tibet and the fourth, a hulking New Englander roadie monk who drove the van for their tour of North America.

The accommodations were already decided: no one would share a room with the roadie who snored, so he sank his large frame on an noisy air mattress in the living room, and, after dinner in a Mexican cantina favored by rock musicians and highly placed California politicians, we retired for the night. 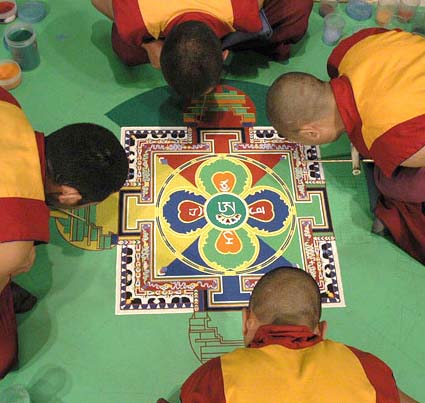 The roadie’s cavernous sunrise snores segued into his dharma brother’s deep throaty chanting of a prayer before breakfast of peanut butter, jelly, eggs, vegetarian bacon, toast and Darjeeling chai. (Veggie bacon would give way to the real nitrate glowing stuff as the week wore on and we all got used to the realities of Tibetan monks’ diet of beef, Coke, etc.) Then it was off to the museum to get on with the work.

Three of the monks would start the process by drawing the “blueprint” in chalk. The rest of them went to Disneyland. This was not the first reality check I did for myself during the days they were here. It became perfectly clear that the mandala’s higher powers were not compromised by life in the lower realms nor vice versa.

AS MENTIONED, ACCUMULATION seemed a sub-theme of the monks’ stay. The first request my guests had was to go to “thrift store” to “buy box.” Amiable host, I inquired what size box and stated that I could obtain free ones from a canned goods store. “Box” transmuted into suitcase. They wanted to replace the suitcases in which their costumes and accoutrements were transported on this international tour. Thrice I piled four monks with the afternoon off into my car to search secondhand stores for the right pieces of luggage. Each shopkeeper received us with a hearty sense of bemusement as we supported causes ranging from AIDS to the local mission.

Eventually, we expanded our search to include pawn shops and searched for used small consumer electronic devices to be reborn into new use in India. But the best find was a T-shirt sporting a logo of an American fast food chain morphed as “Buddha King.”

On the night before the closing ceremony and their departure, the lamas had free time, so I volunteered to do laundry. Stripped down to his swim trunks, a ski jacket, a Disneyland Mickey Mouse hat and his rosary, one of the monks said he would like to see a video if possible. “Jackie Chan, in Hindi” was his translator’s remark. “Hindi I can’t get after 7pm,” I replied. Any Jackie Chan would do, I was informed. So the two of us went to the local rental shop and obtained three action thrillers (lotsa fighting and shooting), picked up a half gallon of vanilla ice cream and headed for home. The kung fu flicks party the night before a final ritual seemed a bit out of place. Given the Tibetan Buddhists penchant for replanting their souls in new bodies and practicing complex visualizations, it’s hard not to believe that, like the Pink Panther, these men couldn’t simply jump into the mandala and disappear … defying time and space.

As noted earlier, everything went off like clockwork the next day. All packed up in their new old suitcases, with the Yankee roadie at the wheel, the monks hit the road destined for their next date with creation / destruction in Washington DC.