I felt clean for the first time in my life. That’s what Aldous Huxley said when his house and everything in it was destroyed in a fire. I admired the man and read everything he wrote. And I longed for this kind of non-attachment, too. I’d go to sleep imagining the richness of his personal library, which contained, I’d read, more than 4,000 volumes. I believed that up in smoke went books inscribed by intimates such as Alan Watts, Paul Reps, Christopher Isherwood, and oh my dear, Krishnamurti. Musing about a man whose family could be read about in the Britannica, I made myself imagine his life as richly woven and subtly colored as a medieval tapestry. Conjuring images of treasures from his many travels, I also conjured those same treasures burning, disintegrating, disappearing.

Everything is yours as long as you regard nothing as your property. He’d said that too. And so I consciously tried to cultivate a disdain for possessions. If Huxley could let go so easily — then so could I. But then the apartment in the tenement where I grew up in New York City burned down and I didn’t feel like Huxley at all. I felt loss. I knew something, memories mostly, had been taken from me. But I didn’t know then they wouldn’t be given back.

We had a library of sorts too. Our Funk & Wagnall’s encyclopedia, was the only set on the block. There were few books in our home, but one was signed, by James Hill. My father told me he was a relative and that the book had been written during the period of Reconstruction. The period of what? We didn’t learn about Reconstruction in school so I thought my father – given to telling ghost stories and one story even about a ghost dog, and tales of the old South, particularly his Mississippi — had made it up.

My father’s heavy, black Royal typewriter was sturdy but it could not have survived the fire. Like the encyclopedia, it was the only typewriter around. It had a cover but no case but no matter, my father conferred on it portability status, carrying it around up and down flights of stairs to the apartments of neighbors. Setting up the Royal on tables in kitchens steamy with pots of stewing collard greens, he wrote death notices of people whose lives could be summed up in a few short sentences, and composed eulogies that made you cry. He helped those less literary write righteous letters to irresponsible congressmen, fiery missives of indignation to unreliable landlords, and drew up petitions to be signed by the irate.

Memory does not allow me to take inventory of possessions I never got to say goodbye to, but I know I have not fabricated satin ballet slippers, favorite dolls, and teenage diaries. I don’t know if the fire burned for one hour or two, but I am sure no one would have known that a puddle of black wax was Joan Baez, Miriam Makeba, and the Miracles, their music blended and harmonized for all time.

I tell myself that I can, if I think behind the curtain of closed eyes, remember exactly and for sure, the layout of that apartment. I am sure, I tell myself, that I know where the windows were, the doors, the closets. But the pattern of the kitchen floor linoleum, the feel of the upholstery on the living room furniture are lost to me. I can let my mind, no longer memory, wander through those rooms, but I am not now certain the hall was really that long or the “front room” with the “French windows” that large. And no, I do not remember colors.

If we had a treasure it was the old shoebox full of photographs at the bottom of the closet in my father’s room and it must have been the first thing to burn. The rare times I was curious about a past, I’d ask him to take out the box so I could look at the browned black and white snapshots of his dead brothers and sisters. This is my father, my father would say, his voice strangely formal. In a small photograph, hardly bigger than a postage stamp a black man looked at me from under his brimmed hat. His expression is meek, his eyes unassuming. I am sure he never left the state of Mississippi. There’s a good chance he never left the Delta region where he was born. I know that in his eighty years my father journeyed exactly twice: once out of Mississippi and once back.

Once, I asked my father if his father had been a slave. In a voice cracking with displeasure and impatience at my poor sense of history and deficient education, he answered Of course not. With the persistence of a child I asked: a sharecropper? But then he refused to answer. Now, I wish the child had been more persistent. Now, I would want him to understand my need for those same memories he must have needed to forget.

There were several small copies of my parents’ wedding photograph in that box. A large tinted photograph of that wedding, the only picture in a frame in our apartment, hung on the wall in the living room during those years when a city day officially ended for me as the street lights came on. I don’t remember when that photograph was taken down but one day it wasn’t there anymore and the wall went on as if it had always been bare.

When I left my father’s home I stepped out into a generation committed to impermanence. By the time I had a passport I also had not just the ethos and sheer determination but what seemed to be the genetic disposition to never stay anywhere too long (no, no one was counting, one just knew when to leave).

Permanent residency. Those words had all the appeal and finality of a tomb. But I have come to a stop in Japan, a standstill for sure. My books are as gold to me. I treasure my possessions, photographs especially, and the things of a lifetime that I surround myself with that constantly remind me that beauty should not be seen but beheld. All these things give me comfort and a sense of a past. But if there were a fire I would let them burn. 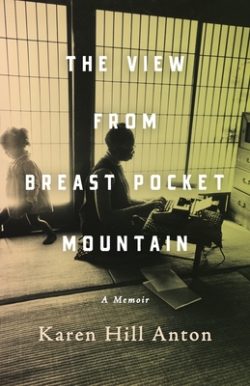 This article was first published in KJ50: Transience (sold out)

Karen Hill Anton is a writer, cross-cultural consultant, and ni-dan in Japanese calligraphy. She has lived with her husband and four children in Tenryu, Shizuoka prefecture since 1975. ‘The View From Breast Pocket Mountain: A Memoir,’ was published September 2020.