[N]AKANISHI HIROFUMI was born in Shizuoka, “in a small city known for Mt. Fuji and green tea,” and worked as a chef at the Hotel Okura, Tokyo and the Japanese Consulate in New York City before settling in Kyoto, where in 2000 he and his wife Sherry renovated a large old wooden house in the Okazaki district and opened the Nama Chocolate Organic Teahouse. A Japanese version of traditional French ganache, nama (“fresh”) chocolate is a delectable mixture of chocolate and cream prized by chocolate aficionados around the world. Nakanishi’s signature Sweet, Bitter and Matcha nama chocolates reflect modern tastes while paying tribute to Kyoto and its centuries-old artisan heritage. 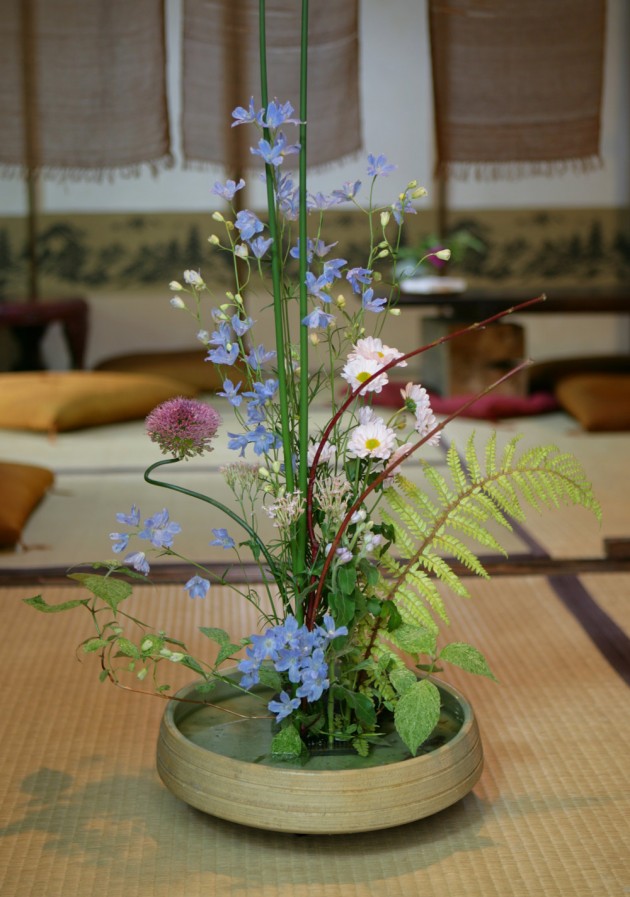 In what way does Kyoto inspire your work?

Living in Kyoto inspires me to live and work as I do. Because of Kyoto’s 1,200-year history as Japan’s imperial capital, there’s a pride we all share here in doing things well. Most Kyoto artisans still work by hand, and many both live and work in their homes. It’s a lifestyle. This gives personality to our products.

And Kyoto is a relaxed place. When customers come to our teahouse to have some chocolate with coffee or green tea, they often stay for hours. I remember two young women who visited us, who after eating, lay down on the tatami floor and using their seat cushions as pillows, closed their eyes and fell asleep. Not embarrassed at all, just natural, as though they were in a friend’s home. And whenever someone chooses to sit in our garden, almost certainly they will stay for most of the day. There’s timelessness to our teahouse, aided by the sound of water falling into the pond, the chirping birds, and the singing of the cicadas and the bell crickets. 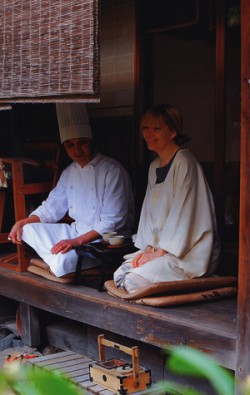 You spoke about the Kyoto artisan lifestyle. In present-day terms, what does this mean to you?

Simply speaking, it’s a healthy life. On a typical day, I wake at four in the morning with no alarm clock. I sit at a low table on the tatami, and with a long knife I begin cutting my chocolate into squares. I do it by eye, so in fact each piece differs slightly. Sometimes Sherry helps me to wrap the packages. She did the artwork for the boxes, a painting of a red flower on handmade traditional paper on which she has written “paper, petal, blossom, flower”: her image of Kyoto. I water the gardens around our home and sweep the leaves, by which time our son, Sasha, wakes up and asks me to read to him. I make chocolate in the morning and from noon to five o’clock in the evening our teahouse is open to the public.

There isn’t any separation between my work and my life. Customers will come in the morning or evening when we are closed, asking to buy some chocolate. As we live and work in the same building, there really isn’t a line we can draw between being open and closed. Our house has sliding paper and wooden doors so when they are pushed aside or simply removed in the summer, the outside and inside meet. On the second floor, where we sleep, the rooms’ windows have no glass panes, so we can see and feel the beauty of nature without separation.

There is a movement in the United States and internationally towards ‘organic’ farming, cooking, and living. What are your thoughts on organic chocolate?

My bitter chocolate, which is organic, has a strong straight cocoa taste. Organic food tastes better, although it’s difficult to produce a lot and the cost is much higher. This is one reason why the organic movement has been held back in Japan. But for me, “organic” is something that is not limited to an environmental definition. It is something more, something that defines one’s life, what one holds sacred.

You originally began your career as a chef, in Tokyo and New York. Kyoto is known for its traditional confectionary based on such ingredients as rice and adzuki beans. Where does chocolate come in?

At the Hotel Okura and at the Japanese Consulate all of the menu items I made were French, so it was natural for me to create a European sweet. My teahouse has a traditional garden but the flowers bloom, the water in the pond flows, it is moving, and everything changes. To make Kyoto seeped in the past, stagnant, is to make a mockery of it. And the Japanese love to travel, most have been outside of the islands at least once, we’re accustomed to foreign tastes and chocolate is very welcome here. But I feel it needs to be adapted to the sensitivity of the Japanese, not as a cheap sweet, as in a candy shop, but raised to a higher level, to be enjoyed by a developed palate.

The essence of chocolate may be the sweetness that comes out of it. The sweetness it gives to people, who in turn mirror that quality. Chocolate is simple. Without this simplicity, this naturalness, people wouldn’t truly be able to relax, feel at ease, and enjoy themselves. It’s very profound; this magic of chocolate, in the way that it connects and reflects what it means to be human.