Naoko Nakasone is leading a movement to bring millet and grains1—spirit food—back to Japan. In ancient times, these foods were known to bring peace and harmony, and were offered to the gods as an expression of gratitude. In Japanese kanji, 和 (wa) means “peace and harmony,” and is derived from the character for grain (禾, nogihen), and eat (口, kuchihen). Determined to revive this culture, Naoko began her journey in Okinawa, hand-delivering millet seeds2 to farmers in each and every smaller offshore island. Recently, she helped initiate a millet farmer’s union, whereby farmers in Okinawa have joined her mission. Along the way, Naoko and her husband opened Ukishima Garden, a vegan restaurant that embodies the ancient spirit she is working to revive. In 2016, they opened a branch in mid-town Kyoto, on Teramachi-dori. 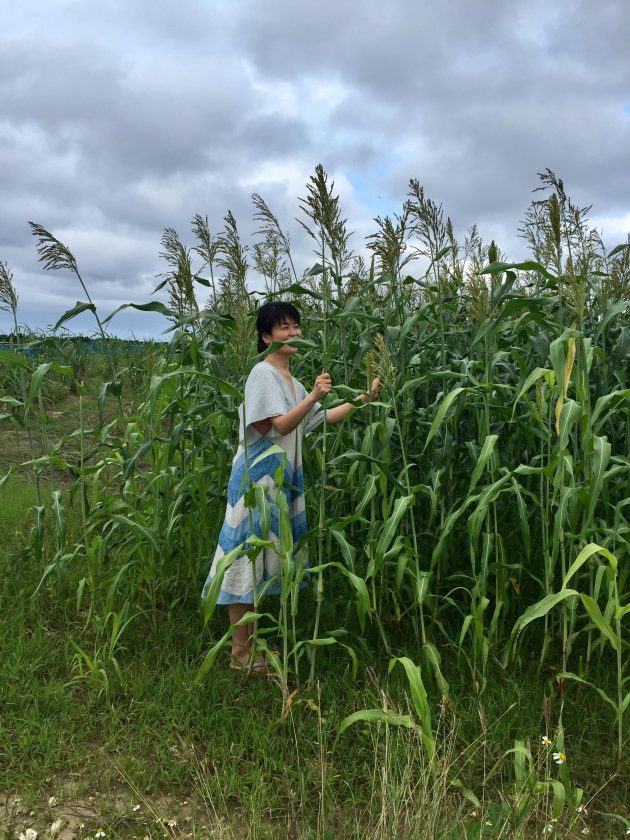 What is the story of how your restaurant came to be?

I am vegetarian, and I wanted to share a table with people from all different food preferences, allergies, and religions. When everyone can come to the same table and dine together, that’s the most peaceful way of dining, and that’s why I started the restaurant in Okinawa seven years ago. When I opened it, I thought about sustainability issues in the food industry. In ancient times, millet and grains were a part of daily life in Japan, but now these foods are disappearing. So this is a way of sustaining that agriculture. In Okinawa, another issue concerns sugar cane. When people grow sugar cane, they use a lot of pesticides, which run into the rivers and into the ocean. That’s another thing I had in mind, to cultivate the same ingredients but in a way that doesn’t use pesticides.

How did you begin to care about these issues?

It was 13 years ago when I started changing the way I eat. At that time, I kind of… heard the cry of mother earth that something needs to be changed, so I just stood up to be the change myself.

What do you mean, when you say you heard the cry of mother earth?

I imagined, what if we just continue the way we eat? Destroying the animals and destroying the soil with pesticides, all of this. If it continues, what is going to happen to the earth? I imagined that the earth is really suffocating in that sense.

What is your connection to Okinawa?

I was born in Tokyo and moved to Okinawa 10 years ago. I love Okinawa. It is my soul home. I really feel that deep connection to Okinawa, spiritually, from my heart. It’s hard to explain, but I feel happy just being there.

And the millet that you spoke about… how long ago was it a part of everyday life?

Earlier than 70 years ago, before the war. Back then, people were eating grains, but after the war, Okinawa was occupied by the Americans, and things got more Westernized. Food culture from the US came to Okinawa, like canned meat, ketchup, things that were not nutritious. People’s health got worse. Now the life span of Okinawans is the worst in all of Japan. It used to be the best, and now it’s the worst. Number one.

Do you think this is something people can feel themselves?

They feel there’s something wrong, but they’re always so happy because they’re in the tropical part of Japan. So it seems like they don’t really care that much. But there’s a lot of disease there right now. If we bring grains, millet and vegetables back into the food that we eat today, maybe we can go back to the best life expectancy type of culture, with the same kind of health we had from the things we ate in ancient times. 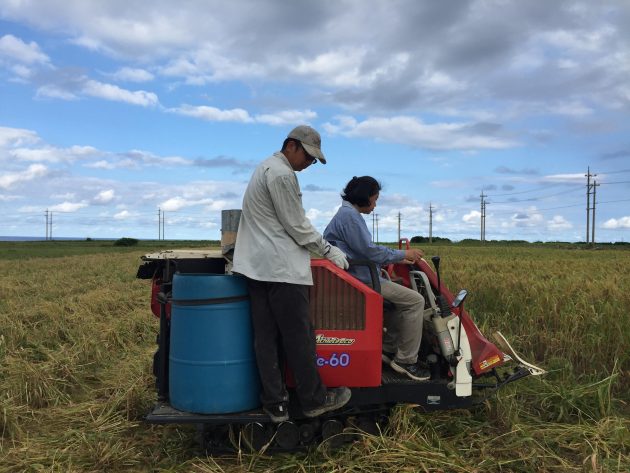 Are there other cultural practices, connected to food, that have been lost over time?

In the good times way back when, the mothers would always make the soup base from scratch, then the kids would see and learn from that. All the foods were cooked from raw materials. But now people can’t sustain their lives. Especially in families where the husband and wife work, the kids are always eating something that’s prepackaged, from the supermarket. Food is very industrialized right now, not cooked by mothers. There’s no love to it. This culture has been lost. Its very sad.

Do you ever communicate your sadness to the people of Okinawa?

I have a cooking class for wives and mothers. In my class, I teach them how the heart is connected to the hands, and so when we cook with our hands, it’s actually a cycle from the heart to the hands, and then it goes into the food that everyone eats. So yes, in that way I express my feelings to the mothers.

When you say mothers, do you mean literally?

Yes, well mostly it’s the mothers who are housewives who have to cook.

So through your restaurant, you hope to spread a love of nutritious food and a love of the earth to the people you serve?

That’s very important, but the actual issue is so much more local. We are so essentially connected to the earth. If the soil where we live is toxic, then our bodies become unhealthy as well from these toxins. So how can we change this reality? Maybe we have to bring the millet culture back, the ancient culture in which we were healthy. That’s where everything gets started.

Where do you source the grains that you serve?

Local farmers. Okinawa has a main island and there are smaller ones around it. I had a connection on the main island, and then I brought millet seed to all of the smaller islands so that the farmers there could grow millet as well. In these small islands, the older generations remain, but there’s not enough work, so the younger generations have left. If they start producing millet, then maybe the sons and daughters could come back and help. And then they could also use the millet to make processed foods as well. There would be a larger work force this way. We see this happening now in Hateruma island. The sons and daughters—mainly the sons—are coming back to the island to make foods out of the millet. Now the farmers on all the islands have become a big group to preserve millet culture.

How did they form this group?

It’s a farmers’ union based on millet. It’s really more difficult than you think to cultivate millet. The seeds are so small, and there aren’t many good machines to crack them open. The reason why the farmers joined together in a union is because they didn’t have the proper machinery. It was expensive to buy—this machine is very hard to get. But if the farmers made a union, then the union could have one machine that all the farmers could share to process their millet to the point where we can eat it. That’s why the union was created.

Why millet, instead of, for example, broccoli?

In ancient Okinawa, millet used to symbolize an abundance of harvest. One millet plant can bear 3,000 seeds. After this, each of those 3,000 seeds can bear 3,000 more. In Japanese, we have a word for this, ichiryu-manbai (粒万倍). It means “a single seed can eventually produce a great harvest.” When people grew millet and grains, they didn’t need to scramble for food. Scrambling causes conflict, but in the absence of scrambling there was peace. For this reason, people really appreciated millet and served it to the gods as an expression of gratitude. But now that millet is gone from our culture, even the culture of prayer, that heart of giving and serving the gods, is gone as well. We call it spirit food. Let’s bring back the spirit food so that we don’t lose that spirit in our culture as well.

1 Though commonly considered a whole grain, millet is technically a seed.

2 Of the taka-kibi (sorghum) variety

Ananya Mayukha recently completed her BA in Psychology at Williams College, where she received a travel fellowship to learn about how strangers connect with each other in different parts of the world. So far, she has collected stories in Iceland, The Netherlands, India, Thailand and Japan.