A 75th Commemorative Year for the Hibakusha (2020-2021): Reflections on Our Tenuous Future

The year 2020 will long be remembered as the year of the coronavirus, unless more dramatic scenarios lie just ahead. Covid-19 has touched, perhaps transformed, humanity’s consciousness, and it will never be the same. Never before have so many of us been brought so close together while being requested to stay so far apart.

Over the first half of this year, most of the 8 billion of us have been advised to  practice social distancing while experiencing the fear of being locked down.

All this long while, we find ourselves reflecting on our individual solitudes, along with pondering our children’s futures.

“It is our suffering that brings us together. It is not love. Love does not obey the mind, and turns to hate when forced. The bond that binds us is beyond choice. We know that there is no help for us but from one another, that no hand will save us if we do not reach out our hand. And the hand that you reach out is empty, as mine is. You have nothing. You possess nothing. You own nothing. You are free. All you have is what you are, and what you give.”
— Ursula K. Le Guin

The Hibakusha, those who 75 years ago survived the fires and black rains of Hiroshima and Nagasaki, know this well. They’ve lived through hell and have brought the world a message, a prayer to humanity that remains unanswered. A softly spoken hope, now nearly gone. 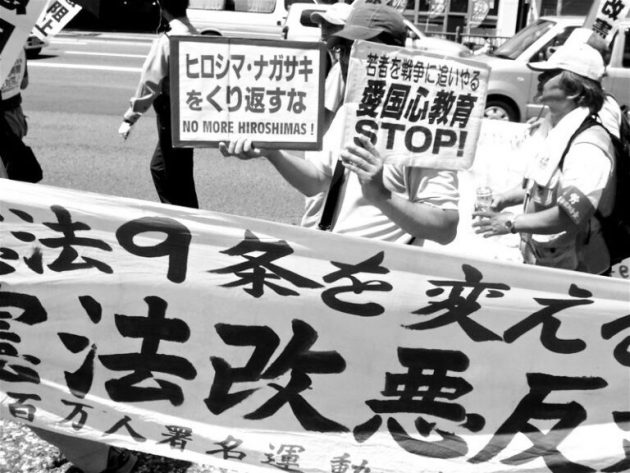 “No more Hiroshima’s. No more Nagasaki’s.”

“What has kept the world safe from the bomb since 1945 has not been deterrence, in the sense of fear of specific weapons, so much as it has been memory. The memory of what happened at Hiroshima (and Nagasaki).”
— ­John Hersey

If John Hersey is correct, then perhaps we need to ask, how well do we remember? Have we evolved as quickly as necessary, towards what has long been so very essential? Have we now become more conscious of our fragility as a species?

If so, why have we so inadequately addressed this most existential issue, especially since the threat has been constant all these years, right up to this writing. Could it be mere complacency?

Or perhaps it’s the inherent pathological crack in our thought process, “Unless we possess the bomb we will not be safe.” / “Possession of the bomb will make all of us safe.” Belief in this madness makes us all perpetrators of a deadly serious yet global fallacy, nuclear deterrence.

“Ring the bells that still can ring
Forget your perfect offering
There is a crack, a crack in everything
That’s how the light gets in.”
(Leonard Cohen)

Many of the Hibakusha and their dependents have long held a light over the horrors of the August 1945 atomic bombings of their homes, families, cities . . . their existence. While doing so, they have never pointed any fingers of blame at either side of those engaged in that long and bitter war. For the Hibakusha were the humble accepting victims, along with countless others throughout the world who suffered in other ways.

However, only the Hibakusha have experienced a first instant of collective mass horror. A blinding yet illuminating flash that has lasted throughout their entire lives.

Mrs. Koko Kondo of Kobe, whose father, Reverend Kiyoshi Tanimoto, who inspired John Hersey’s writings, was one of them. 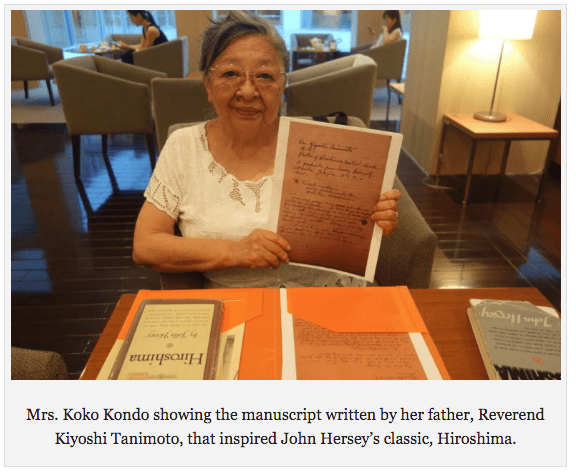 Perhaps the man often called The Father of the Atomic Bomb, J. Robert Oppenheimer expressed it most eloquently when explaining the results of the first testing of the bomb,

“We knew the world would not be the same, (a) few people laughed, (a) few people cried, most people were silent. I remembered the line from the Hindu scripture, The Bhagavad-Gita. Vishnu is trying to persuade the Prince that he should do his duty. And to impress him, (He) takes on His multi-armed form and says, ‘Now, I’m become death, the destroyer of worlds.’ I suppose we all thought that, one way or another.”

Peace Mask Project, a Kyoto City registered international NPO worked with 100 of the Hibakusha (from Japan, Korea, Taiwan and the USA) and their descendants, (ages ranged from 8 to 92 years old) from October 2015 to March 2017. The goal was to create 100 Peace Masks, Washi paper facial impressions for exhibition. These Peace Masks were exhibited in Hiroshima with an event at the Hiroshima Peace Memorial Museum on March 26, 2017, that included a talk by Professor Ikuro Anzai, Honorary Director of the Kyoto Museum for World Peace and current General Coordinator of the International Network of Museums for Peace.

Two of the goals of that endeavor have been completed. The first was the making of the 100 Peace Masks with a subsequent exhibition and event program in Japan.

The second goal was the exhibiting of the Hibakusha Peace Masks at an appropriate international location. This was achieved at the Inaugural Summit of Emerging Leaders, November 28 to 30, 2018 at the United Nations Conference Center, Bangkok.

Along with the 100 Hibakusha Peace Masks exhibited behind the 347 participants from 46 countries, one of five Keynote Addresses was given by Kya Kim, Director of Peace Mask Project. The Founding Artist of PMP, Myong Hee Kim was also invited there to set up the exhibition and to conduct a demonstration mask-making workshop.

The third and final goal of the Hibakusha Peace Mask Project is to find a permanent home for the 100 Hibakusha Peace Masks at a meaningful and most appropriate international location. Peace Mask Project believes that the successful completion of this goal will contribute to a visible metaphoric presence of the Hibakusha as a reminder of their contributions to the grand endeavor to both limit and eventually abolish nuclear weapons.

It is sincerely believed that such a presence would greatly add to the expression and spirit of their 75-year prayer.

Peace Mask Project heartily welcomes all independent anti-nuclear organizations and individuals in the fulfillment of this meaningful goal.

For further information and consideration, please write to the International Coordinator of Peace Mask Project, Robert Kowalczyk at journey04@mac.com.

This piece originally appeared on Transcend Media Service on Aug. 3, 2020 as TMS: A 75th Commemorative Year for the Hibakusha (2020-2021), and is being re-posted here with the permission of the article’s author and long-time KJ contributor, Robert Kowalczyk.

Robert Kowalczyk is a member of the TRANSCEND Network for Peace Development Environment. He is former Professor and Department Chair of the Department of Intercultural Studies in the School of Art, Literature and Cultural Studies of Kindai University, Osaka, Japan. Robert has coordinated a wide variety of projects in the intercultural field, and is currently the International Coordinator of Peace Mask Project. He has also worked in cultural documentary photography and has portfolios of images from Korea, Japan, China, Russia and other countries. He has been a frequent contributor to Kyoto Journal. Contact can be made through his website portfolio: robertkowalczyk.zenfolio.com.